Catching up with news from Russia and Ukraine, from English-language sources

This article originally appearedat Antiwar.com
In an overwhelming 348-48 vote, the House of Representatives passed a resolutioncalling for President Obama to immediately begin providing weaponry to the Ukrainian government.

The resolution claims Russia is plotting to take over eastern Ukraine, and cites Pentagon officials supporting arms shipments to the Ukrainian military. The resolution is non-binding.
The preamble to the resolution includes several factual errors about the Ukrainian conflict, including the bizarre claim that Russia’s annexation of Crimea undermined an international order established after World War 2. At the end of WW2, Crimea was still part of Russia’s Soviet Socialist Republic, and it had been Russian from the early 19th century.
Conspicuously absent in the incredibly wordy resolution is a single mention of the ongoing ceasefire, which has brought Ukraine’s Civil War to a virtual halt in recent weeks. The Obama Administration had sent only non-lethal aid, saying they didn’t want to imperil the ceasefire. "Igor Valeryevich Kolomoisky is dismissed from the post of the chairman of Dnipropetrovsk regional administration," the decree published on the website says.

On March 22, several dozen armed men in masks seized the head office of Ukraine’s oil major Ukrnafta in Kiev. Earlier, Sergey Leshchenko, a lawmaker with the Petro Poroshenko Bloc, wrote on his Facebook account that Ukrnafta office had been blocked by servicemen from the Dnepr-1 battalion. "The entryway is blocked by people with guns. After a rather lengthy exchange, one of them - wearing a black helmet - said they were men from the Dnepr-1 battalion. He refused to say what the battalion of the Dnepropetrovsk’s territorial defense was doing in Kiev," he wrote.

Ukraine’s biggest oil company Ukrnafta accounts for more than 86% of Ukraine’s oil production, for 28% of gas condensate production and 16% of gas production. Naftogaz Ukrainy holds the controlling stake (50% + 1 share), 42% are held by structures of Kolomoyskyi, and eight percent are held by companies registered in Cyprus.

On March 19, Ukrtransnafta’s (another company owned by Dnepropetrovsk region governor Kolomoyskyi) supervisory board dismissed Alexander Lazorko from the post of the company’s board head and appointed Yury Miroshnik acting chairman of the board. Later reports said that the building of the company was seized by "gunmen led by Kolomoyskyi." However, Interior Minister Arsen Avakov said that Kiev’s law enforcement agencies took Uktransnafta’s premises under control.

According to media reports, in April-May 2014 Ukrtransnafta pumped 675,000 tons of process oil from the county’s trunk pipelines without permission of the Ukrainian Ministry of Energy and Coal Mining. Prime Minister Arseniy Yatsenyuk demanded then that the law enforcement agencies initiate criminal proceedings and prosecute those responsible for illegal siphoning off of oil.

Russia has initiated criminal proceedings against Kolomoyskyi on charges of organization of murders; the use of banned means and methods of warfare; abductions and also for putting up obstacles to journalists’ work. He has been arrested in absentia and put on the international wanted list.

Ukrainian authorities received the first batch of American Humvee vehicles on Wednesday. Altogether, 10 armored off-roaders have been brought to Kiev’s Borispol airport aboard a US Air Force military tactical freighter.

Ukrainian President Petro Poroshenko personally attended the “presentation” ceremony and even drove one of the vehicles.


The HMMWVs (Humvees) are being delivered to Ukraine within the framework of non-lethal military aid promised to Ukrainian authorities by Washington. Though the announced help is non-lethal, the newly delivered Humvees have armored defenses and bulletproof glass. Each vehicle has a pre-mounted machine gun turret on top of it (without the actual weapon, though). 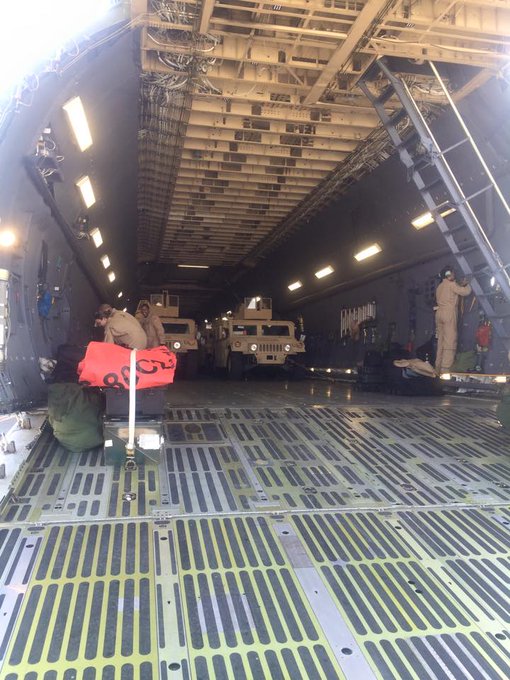 Ukrainian armed forces have some experience of operating Humvees brought to troops earlier. 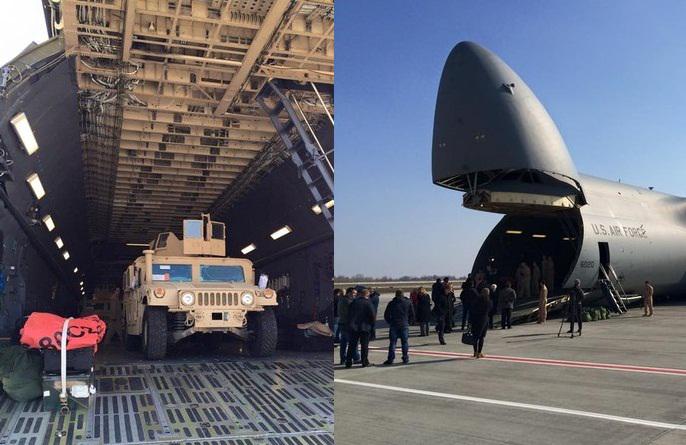 
One such vehicle was captured by the Donetsk rebel militia after the elimination of the Ukrainian task force in the Debaltsevo pocket in February. 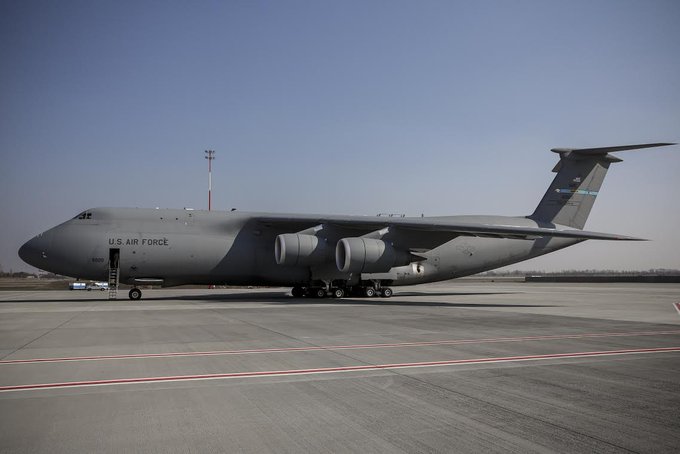 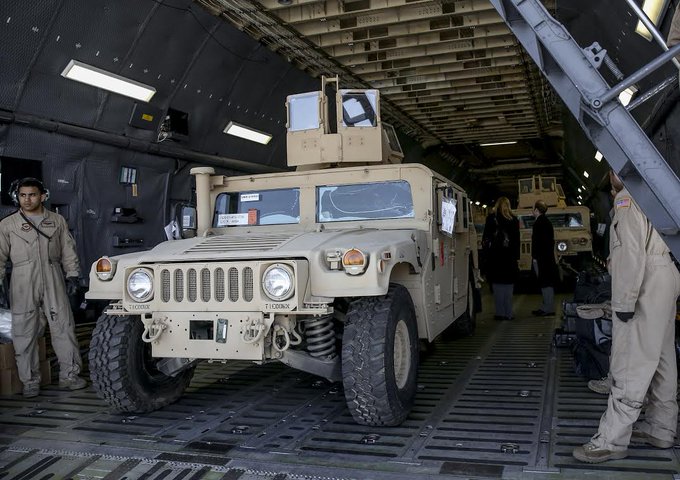 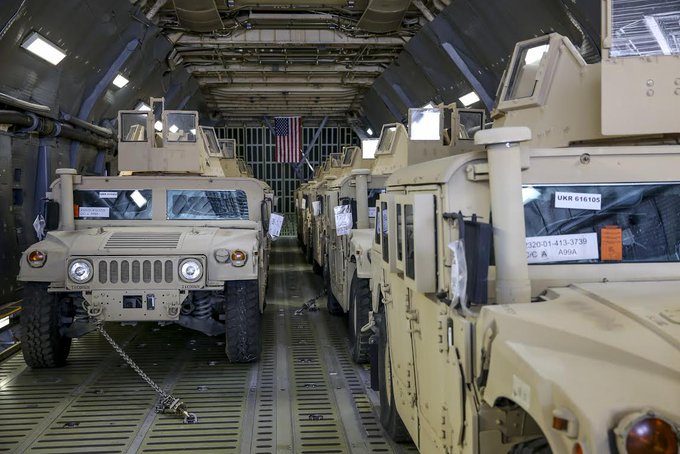 До міжнародного аеропорту «Бориспіль» прибув літак з першою партією американських військових автомобілів HMMWV
The ceasefire agreement currently in effect in Ukraine is not respected by Ukraine’s armed forces, which continue shelling of the settlements and cities under the control of the rebels. Ukraine authorities in their turn also blame the militia for ceasefire violations.


Last week, Russian Foreign Minister Sergey Lavrov called on Germany and France to take action against Kiev’s non-compliance with the peace agreement. According to Lavrov, Kiev didn’t make an effort to start dialogue with the self-proclaimed republics of Donetsk and Lugansk on the modalities of elections there.

The politicians of the Democratic Left Alliance (SLD) of the Polish Sejm submitted a draft resolution to the Parliament in view of increasing nationalist tendencies in Ukraine.

The politicians of the Democratic Left Alliance (SLD) of the Polish Sejm submitted a draft resolution to the Parliament in view of increasing nationalist tendencies in Ukraine, Tadeusz Iwiński, Deputy Chairman of the Seimas of the International Affairs, told RIA Novosti.

The "Polish Sejm expresses concern over the Ukrainian state authorities’ nationalist traditions associated with ideas of Dmitri Dontsov and political practice of Stepan Bandera. Also the glorification of those responsible for the crimes committed against the Polish nationals,” the document read.

Poland Prepares for 'Hybrid War' Through Shady Diplomacy, Arms Buildup
The draft resolution notes that "The Verkhovna Rada of Ukraine recently honored the death anniversary of Roman Shukhevych, commander in chief of the Ukrainian Insurgent Army (UPA), who was responsible for the death of 100,000 Poles in Volhynia and Eastern Galicia.

"The Polish society is seriously concerned over these facts. For the sake of memory of the victims of World War II, the Polish Sejm calls on Ukrainian authorities to abandon the admiration of persons and organizations responsible for the crimes against the Poles," the document says.

Twenty-nine members of parliament from the faction of the Democratic Left Alliance have signed the document. The Ukrainian Insurgent Army has been the armed wing of the Ukrainian nationalists since the 1940s. During the World War II, the UPA acted against the Soviet partisans. After the restoration of the Soviet power, the UPA fought against the Red Army on the side of the Nazi Germany. According to the Polish historians, ethnic cleansing in the south-west of Ukraine was conducted by the UPA under the leadership of the Organization of the Ukrainian Nationalists (Bandera faction).

Polish historians estimate that the number of Polish civilian casualties was in the tens of thousands. Some 300-400 thousand ethnic Poles fled to the west. Similar actions were taken by Ukrainian nationalists in 1943 in Volhynia. The glorification of army commander Roman Shukhevych, one of the leaders of the UPA and Bandera, draws criticism from many World War II veterans and politicians.

Ukraine Continues to Spend Billions on Arms Despite

The head of one of eastern Ukraine's breakaway republics asks why Ukraine's president is publically talking about the delivery of weapons from nearly a dozen countries in Europe while simultaneously proclaiming his commitment to peace.