The Night of the Long Knives


The "Night of Long Knives" Cometh? 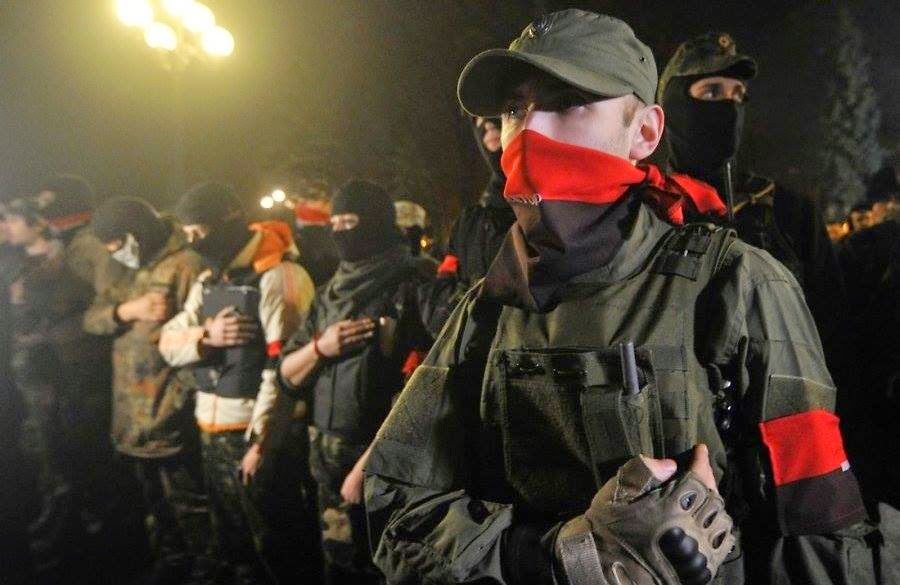 It is being reported that the Right Sector and all formations which are not under UAF or National Guard juristicion hav been ordered to leave the ATO zone not later than April 1. It is an order which, in the words of a Right Sector unit commander, they have been warned "not to disobey."

The Right Sector is protesting, claiming that once they leave, it will fatally undermine the defensive lines, and they are likewise opposed to their units being disbanded. Moreover, they are playing the "Putin card", by claiming that Poroshenko has betrayed them at Minsk. It is easy to imagine that once they are out of the ATO, it will be difficult for them to justify their existence and, especially, their weapons. One other tangible effect will be the elimination of the Right Sector from the profitable smuggling operations between Ukraine proper, the Donbass, and Russia.

Poroshenko is clearly trying to take advantage of the firing of Kolomoysky, which was a useful demonstration of power, to press his advantage and take out a number of other potential rivals. Whether that will help him, or Ukraine, is another question. His nation-wide approval rating is now under 20%, according to a recent survey.

The order presumably does not affect the Azov Regiment, or any other "volunteer" formations which are formally part of the National Guard.

However, it is also evident that the SBU is rapidly gaining in importance and prestige, in part thanks to Nalivaychenko's backing of Poroshenko in his struggle against Kolomoysky. The SBU has already launched a "full-scale operation" against Dnepr-1 militants who have allegedly killed an SBU officer. According to recent statements by Poroshenko and Nalivaychenko, the SBU can count on a major reorganization, expansion, and change of emphasis that will make it into a de-facto political police whose main function will be the stifling of political dissent. In practice it will probably look something like this: 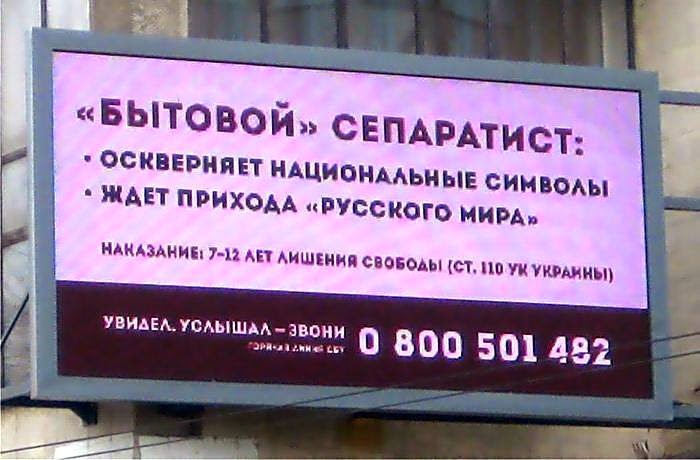 A billboard in Kharkov: "Lifestyle" Separatist. Disfigures national symbols. Awaits the coming of the "Russian World." Punishment: 7-12 years imprisonment (Article 110 of Ukraine's Criminal Code). If you hear or see something, call 0 800 501 482.

So at long last Poroshenko will get himself a loyal (?) Praetorian Guard. But then again, that's what the National Guard was supposed to be, and we know how that turned out...

Poroshenko's spring cleaning: minister arrested right at the meeting of the cabinet (video)

After the defeat of Kolomoisky in the inter-oligarchic quarrels became apparent, Poroshenko continued to ride the wave of victory, launching processes of further centralization of power. On the murder of SBU agents by bandits of Kolomoisky a "special operation" was announced, and right at the meeting of the Cabinet of Ministers a Minister of Emergency Situations was arrested on suspicion of involvement in criminal schemes for the purchase of fuel.

"At the meeting of the Cabinet of Ministers of Ukraine the head of the State Service of Ukraine for Emergency Situations, Sergey Bochkovsky and his Deputy Vasily Stoetsky were arrested". (watch the tape above)

As UNIAN correspondent reports the detainees are suspected of embezzlement of public funds during public procurement.

It is worth noting that the Prime Minister of Ukraine, Arseniy Yatsenyuk allowed the law enforcement to conduct investigation activities in government offices following the report by the Minister of Internal Affairs, Arsen Avakov.

As UNIAN learned in the press service of the Ministry of Internal Affairs, Bochkovsky and Stoetsky are charged with criminal schemes for purchases of fuel from private companies at inflated prices. The officials were detained in accordance with article 208 of the Criminal Code of Ukraine.

Avakov appealed to the Cabinet of Ministers with a request to make the decision to dismiss Bochkovsky and Stoetsky, as well as the dismissal of all the leadership of the State Service for Emergency Situations (SSES) [like FEMA -KR] in all the regions of the country.

For the position of the new acting Chairman of the SSES was appointed the adviser to the Interior Minister Avakov, Zoryan Skyryak.

Sergei Bochkovsky was appointed Chairman of the State Service of Ukraine for Emergency Situations by the government of the Ukraine on April 23, 2014.

KR: A smart move by Poroshenko. Perhaps he learned, that he can score more points by firing corrupt officials then setting up false flag operations.

Corruption in Ukrainian government has gotten so out of control, that Poroshenko needed urgent measures for the headlines.

Several things came together for this spring cleaning to begin.

Kolomoisky overstepped his boundaries, he had a warm spot and lost it because he became a threat to the president himself. If only he put his greed in check, nothing would change.

Some people close to the Ukrainian government reported that the sequence of events was initiated by Geoffrey Pyatt (anyhow he is considered the real president of Ukraine). Now that Ukrainian budget is no longer a business of just Ukrainians, but of the IMF and USA, it is clear that western partners will not patiently watch Ukrainian oligarchs and ministers line their pockets with their money.

In addition the fiscal situation in Ukraine is so dire, that there is simply not enough to go around for all the corrupt officials. So what seems like a triumph of justice in Ukraine, is simply another sign of economic collapse.

As a side effect Poroshenko will learn that standing up for public interests also pays off in ratings and strengthens his political weight (even if the public will never see that money anyway).

The personal assistant of Igor Kolomoysky, Boris “hang them later” Filatov revealed some of the plans of the bandit-oligarch. Naturally, Kolomoysky will not take this sitting down and keep quiet.

The emotional Borka Filatov even changed the appearance of his facebook, in order to express his sadness over the recent events. The photograph of “sad Borka” and the fence—all of that’s beautiful. Naturally, all of the wondrous schemes which Korban and Filatov were not even particularly hiding, the merry free-for-all which spoiled them for over a year, are coming to an end. Now every step will have to be coordinated with Poroshenko. Or, I should say, Poroshenko thinks they will coordinate with him.

1. Boris Filatov: “Instead of integrating workaholics-professionals into the state power structure, they are being sent into retirement. Granted, an honorable retirement. Instead of sharing political responsibility for the mass impoverishment of the people, they are being allowed to leave as national heroes. Yes, very far-sighted…”

2. Boris Filatov: “I didn’t want to write, but anyways. So that the scum don’t celebrate. The Governor of the Dnepropetrovsk Region offered a resignation. The President accepted it. The resignation ceremony was wholly proper. All authority will be transferred to Valentin Reznichenko at his convenience. On Saturday there will be a concert-rally “For United Ukraine”. It will include an annual report by Kolomoysky’s team. There will be Rada deputies, public opinion leaders, volunteer fighters, volunteer helpers, and the new governor. We are inviting all of our supporters. From all of Ukraine. Let’s stop drinking valerian and show the entire world that we can be civilized people for whom the country is above our ambitions. Don’t give reasons for our enemies, internal and external, to celebrate”.

The annual report, invitations to supporters from all of Ukraine, departing as national heroes.

Now it’s clear why the “assembly” has morphed into a “rally”, and was moved from Wednesday to Saturday. It will be a show. Grateful citizens, tears on patriots’ faces. “Kolomoysky, come back.” The stern but kind Kolomoysky, loyal Korban and Filatov next to him.

Kolomoysky is transitioning into the “heroes of the people” and opposition to Poroshenko. Many accusations, denials, and behind-the-scenes battles await us

J.Hawk’s Comment: Poroshenko definitely won this one, though not decisively, and possibly it was a pyrrhic victory. To paraphrase LBJ, is Poroshenko better off with Kolomoysky in the tent pissing out, or outside the tent pissing into it? It’s also interesting that Yatsenyuk put in a very convincing performance as the Invisible Man during the whole opera, as if trying to wait out the storm and then come out on the side of the winner. Typical Yatsenyuk, but also indicative of the still-real power of Kolomoysky. For that power to be broken, Poroshenko would have to go after his Privat parts, with all the risk that entails for the country’s economy.

In other words, Poroshenko would have to do Kolomoysky as Putin did Khodorkovsky: loss of business, public humiliation, prison. That would send the message who is really in charge. The fact that Filatov and Korban are sticking to Kolomoysky suggests their boss suffered a tactical defeat, but nothing more. He still controls Ukraine’s biggest financial empire, and through it much of Ukraine’s politics. But now, as Filatov pointedly suggested, he no longer shares responsibility with Poroshenko for what happens to the country…

...while in the meantime Ukraine's credit rating is being downgraded even further and the number of striking and demonstrating coal miners in Western Ukraine reaches 20 thousand... Several news outlets (and not a few Russian blogs) are discussing Poroshenko's difficulty in choosing the right (wrong?) words when discussing the case of the SBU officer alllegedly killed by militants of Kolomoysky-linked Dnepr-1 battalion a few days ago. The video shows quite clearly that Poroshenko initially referred to the killers as "cynical Banderites", then paused, presumably realizing what he had just blurted out (I mean, the pause is long enough to see the wheels slowly turning in Poroshenko's head), and "corrected" himself by emphatically saying "bandits". I can see the confusion--Banderites, bandits, what's the diff? Ukraine's self-described patriots will surely agree.