The Wahhabis' War On Yemen 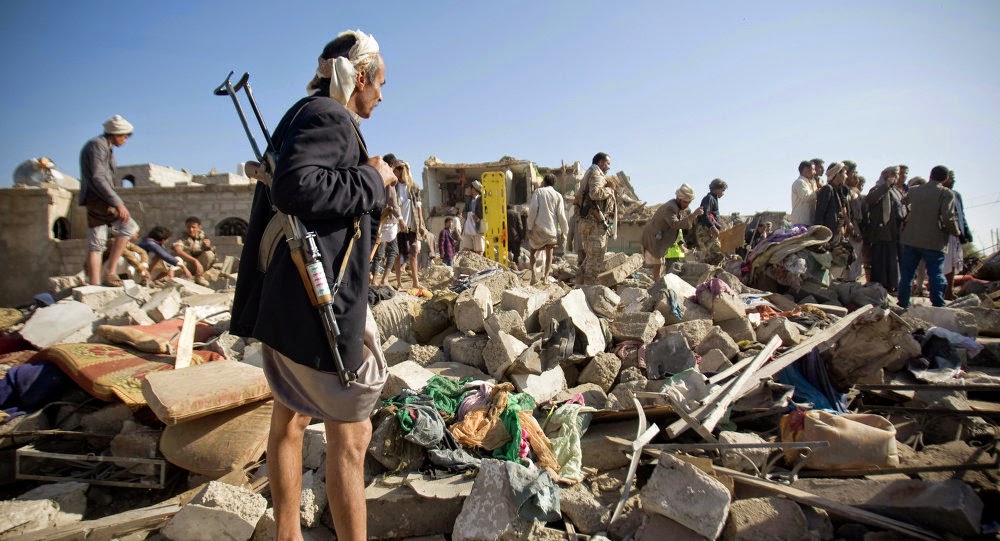 Just yesterday I wrote that the Saudis would not dare to attack Yemen. I was wrong with this:

While the Saudi army is now sending some troops to its southern border with Yemen neither the Saudi army nor the Egyptian will want to fight and lose again against the Yemeni tribes. The Pakistanis are unwilling to send troops. The request for troops the disposed president Hadi made will therefore be ignored. No foreign troops will invade Yemen and the Houthis will for now remain the ruling force.

Over night the Saudi air force attacked the Dulaimi military airbase in Sanaa, the capitol of Yemen.

Yesterday the Houthi led rebellion had kicked the Saudi/U.S. installed president Hadi out of the country and took control over most of its cities including the southern capitol Aden. The Houthi are allied with the former president Saleh, himself a Houthi and replaced two years ago with his vice president Hadi after a U.S. induced light coup. Saleh and the Houthi are supported by significant parts of the Yemeni army. The Saudis had warned that any move against Aden whereto Hadi hat earlier fled would have consequences but no one took that serious.

The Saudis have now announced, through their embassy in Washington(!), that a coalition of Sunni led countries will attack Yemen. These include at least nominally Egypt, Morocco, Jordan, Sudan, Kuwait, the United Arab Emirates, Qatar and Bahrain. The Saudis say that 100 of its warplanes and 150,000 soldiers will take part in the campaign. They also announced an air and sea blockade against the country.

The U.S. is "supporting", i.e. guiding, the campaign through a coordination cell. The White House statement says:


In response to the deteriorating security situation, Saudi Arabia, Gulf Cooperation Council (GCC) members, and others will undertake military action to defend Saudi Arabia’s border and to protect Yemen’s legitimate government. As announced by GCC members earlier tonight, they are taking this action at the request of Yemeni President Abdo Rabbo Mansour Hadi.

The United States coordinates closely with Saudi Arabia and our GCC partners on issues related to their security and our shared interests. In support of GCC actions to defend against Houthi violence, President Obama has authorized the provision of logistical and intelligence support to GCC-led military operations. While U.S. forces are not taking direct military action in Yemen in support of this effort, we are establishing a Joint Planning Cell with Saudi Arabia to coordinate U.S. military and intelligence support.

While bashing Obama the usual warmongers in Congress support this attack.
There seems to be the idea that Saudi/U.S. selected president Hadi, out now, could be reintroduced through force. The U.S. claims that Hadi was "elected" but with a ballot like this any "election" is a mere joke. There is no way Hadi can be reintroduced by force. The chance to achieve the war's aim is therefore low.

Someone warned the Houthis of the imminent attack and they evacuated their offices before they were hit. They declared that all agreements between Yemen and Saudi Arabia , including the 1934 Taif border treaty line, are now null and void and the Saudi provinces of Najran, Asir and Jizan, long claimed as historic parts of Yemen, would be taken back.

The Yemenis are fiercely independent and dislike the arrogant Saudis. The Houthis especially have been at war for over a decade. There are tons of weapons in the country including some $500 million worth the U.S. "lost" after it delivered them to its allies on the ground. The chances for the Saudis to win in a fight against Yemen are very low. Pat Lang, former military attache in Yemen, writes about the Houthi:


Spectacularly gifted in field craft, endowed with a wry, dry sense of humor and fiercely independent among the clans and against whatever government might be, these perpetually armed little hill men make good friends but bad enemies.

Gregory Johnson, who studied Yemen, explains the roots of Houthi's campaign against the various U.S. supported governments in Yemen. Emad Mostaque describes the economic background. There are two Wikileaks cables (1 2) about the Saudi fight with Houthis in 2009. The Saudis ended that campaign after enduring unexpected loses.

While the Houthi have also enemies inside Yemen, and would likely not rule for long without a new internal political compromise, the attack by outsiders is likely to unite all Yemeni forces except maybe Al-Qaeda in the Arab Peninsula.
To see this whole conflict as a sectarian Shia-Sunni proxy war between Iran and Saudi Arabia is wrong:


While the chief combatants in the civil war are certainly playing the sectarian card to some degree, there is reason to think that Yemen will not necessarily become part of some regional sectarian conflict. Regardless of their foreign ties, both the Shiite Houthis and their Sunni opponents are deeply rooted in Yemen, and they are motivated primarily by local issues.

The main danger now is that the Western powers, Saudi Arabia or Egypt will overreact and seek to intervene, ostensibly to counter Iranian influence or to quash the efforts of Al Qaeda in the Arabian Peninsula to gain territory. Yet foreign intervention could very well be the worst approach now—further regionalizing what is still a local fight, injecting a stronger sectarian tone into the conflict while threatening to push Yemen closer to implosion.


The Houthi descendants of my old acquaintances are not servants of Iran. They are not dangerous to Western interests. They are dangerous to AQAP. Get it? Salih will return.

Seen like this the U.S. supported Saudi campaign is actually in support of their Wahhabi Al-Qaeda brethren, not in support of the majority of Yemenis. It is stupid (but typical) for the U.S to support such a move. The fight will, like the British dirty campaign against Yemen in the 1960s which Adam Curtis describes, not result in any progress or success for any of its participants.

The only immediate winners those oil producing countries which are currently distressed by low prices. Oil went up by 6% after the Saudis' plans were announced.

Yemen, Ukraine and the US 'Single Standard'
What critics of the United States’ moves denounce as double standards is actually a single standard: the US does not consider itself (or its allies) subject to rules of behaviour that apply to everyone else. 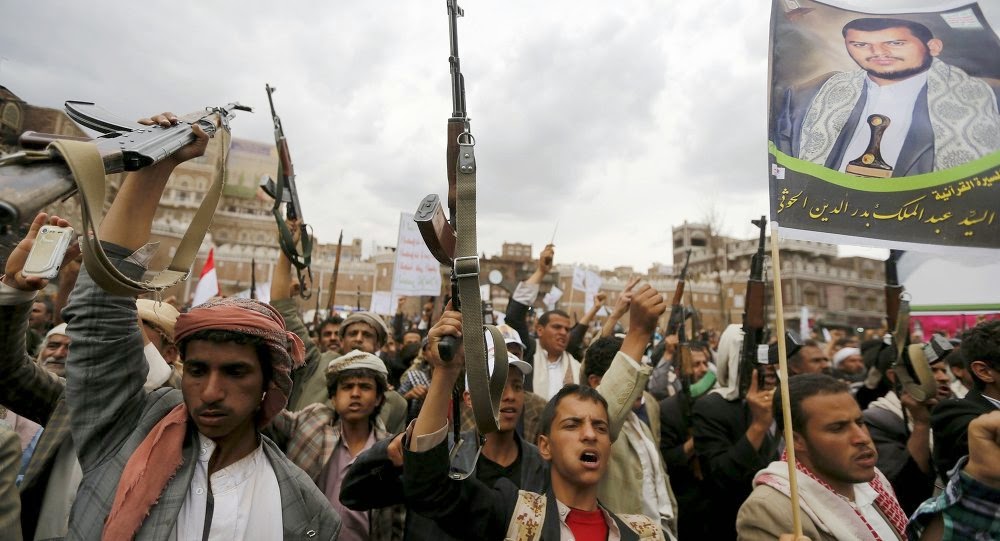 In February 2012 President Hadi of Yemen was elected President of the country in an election of dubious democratic legitimacy in which he was the only candidate. In January 2015 he was overthrown by a coup spearheaded by Yemen's Shia minority. In February 2015 he fled to the southern port city of Aden where he declared his overthrow illegal. He has since fled to Saudi Arabia, which is using violent force to restore him.

In January 2010 President Yanukovych of Ukraine was elected President of the country in a closely fought election declared democratic by the Western powers.

In February 2014 he was overthrown in an unconstitutional coup spearheaded by Ukraine's western minority. In the same month he fled to Crimea where he declared his overthrow illegal and called on Russia to restore him to power. Russia declined to do so but rescued him and brought him to Russia instead.

The United States vigorously denounces Russia's actions, accusing Russia of engaging in an armed intervention in Ukraine — which is not actually taking place — and has imposed sanctions upon Russia, branding the country a threat to world peace.

Those of us better informed about the world know however that this is how the United States always behaves.

Russian foreign minister Sergei Lavrov calls this a double standard. He is wrong. As Noam Chomsky (the US political activist who is also a prominent linguist) pointed out long ago what Lavrov calls a double standard is actually a single standard: the United States does not consider itself (or its allies) subject to rules of behaviour that apply to everyone else. The United States is always gravely offended when others say otherwise. The "exceptional country" is not subject to rules. It is lese-majeste when "lesser countries" say it is.

Arab Foreign Ministers Form Unified Military Force in Wake of Yemen Strikes
In the case of Yemen this application of the single standard is both stark and self-defeating.

No principle of democracy or of constitutional order is at stake in this conflict. The degree to which President Hadi has a better claim to govern Yemen than the Houthis is open to doubt. His election hardly qualifies as "democratic" and the previous regime of which he was for many years part has been called a "kleptocracy" The Houthis passionately oppose Al-Qaeda and the Islamic State, the two violent jihadist groups the United States is in conflict with, which have been making dangerous inroads in Yemen. On the face of it they appear to be natural allies of the United States, not enemies.

The Saudi intervention in Yemen, which the United States supports, is in reality simply a function of Saudi Arabia's longstanding conflict with Iran and of the age old sectarian conflict between the Sunni and the Shia within Islam. Since the Houthis in Yemen are Shia the Saudis treat them as proxies of Iran, though whether they really are that is open to doubt given that they practise a different variant of Shiism to that followed in Iran.

It seems incredible that the United States should involve itself so casually in a millennial sectarian religious conflict it barely understands, tearing up international law in the process.