This paints an amazing picture of the collapse of climate patterns in a whole continent- from the devastating drought in Brazil affecting its largest city and the Amazon basin; to huge forest fires in Patagonia; floods in Chile and feet of hail falling at the equator

The past three months have seen the driest winter in 84 years in southeastern Brazil. Water shortages are now critical in São Paulo, home to twenty million people. The city’s primary reservoir is fluctuating between 6-13% of capacity, and officials are estimating São Paolo’s reserves will last a mere 90 days without additional rainfall. The rainy season, from December through February, is over, and sadly, recent flooding within the city has not raised main reservoir levels, which are located further inland. (1)

The primary reservoir at Cantareira feeding much of the metropolitan city is nearly bone-dry. People in São Paulo are resorting to deliveries from bicycle riders carrying jugs of water. Others are digging their private wells on their own land or even in basements, which can lead to contamination issues. Those who can afford it are hoarding water, and the more resourceful are using cisterns and building rainwater catchment systems. Local rivers are polluted due to sewage problems and cannot be used for drinking water. Some have simply fled the city, becoming 21st century “water refugees”. (2)

Due to the massive glaciers of the Andes, the Amazon and its tributaries, Brazil holds 12% of worldwide freshwater and is called “the Saudi Arabia of water”. So why is this drought happening? Scientists are citing deforestation of the Amazon, Brazil’s very own “chainsaw massacre”, as the causal factor of the drought. As climatologist Antonio Nobre explains:

“That’s what we have learned – that the forests have an innate ability to import moisture and to cool down and to favour rain… If deforestation in the Amazon continues, São Paulo will probably dry up. If we don’t act now, we’re lost.” (3)

Government officials deserve part of the blame, as Brazilians cited recent elections and last year’s World Cup, which conveniently allowed politicians to procrastinate and avoid the problem. This could eventually become a public health issue, as a surge in demand for new wells has led to unprofessional drilling techniques. Well experts estimate only 20% of new drilled wells meet guidelines. (4)
São Paolo isn’t the only city in Brazil facing drought conditions. Rio de Janeiro and Belo Horizonte are also facing water shortages, putting a total of 40 million people at risk in the region, comparable to the entire NYC and LA metro areas in the US. The situation is taking a toll as GDP is predicted to fall in the area, and experts question the government’s readiness for the 2016 Olympics in Rio. At the same time, the Petrobas bribery scandal widens and the Rousseff government is coming under intense scrutiny, which may distract leaders from solving the water crisis.
Due to state incompetence and fealty towards private industry, southeastern Brazil’s water reserves have been irrevocably altered. The megaregion will now be forced to limit public and industrial use if it wants to maintain civil stability. Whether the political class has the guts to go through with a major conservation program is questionable. Dilma Rousseff’s Workers’ Party, dubbed as leftist by mainstream analysts, is more accurately a blend of center-left democratic socialism and neoliberal economic practices. The government swings between populist Bolivarian policies to appease its vast working class, and deregulated financial and industrial policy to please its corporate masters.
Brazil is far from the only nation at risk from drought: last year, parts of India, China, Ethiopia, Australia and many smaller countries were at risk. California is estimated to have only one year of water supplies at current usage rates. São Paulo presents a particularly dangerous test case because it is one of the first modern megacities facing this issue.
Despite the siren calls of the global elite, the 21st century may not turn out to be a model of technological advancement and social stability. Global warming, deforestation, and resource depletion are all intensifying, and could easily lead to a century of climate refugees and worldwide impoverishment. World leaders working with NGOs should be at the forefront of climate change issues, rather than indulging in political chess games in Syria, Ukraine, Iran, Yemen, and beyond.

William Hawes is an independent author specializing in environmental issues and politics.

(Smoke from wildfires covering almost all of the Amazon on August 20, 2014. For reference, bottom edge of frame is 1,000 miles and the Amazon River flows from middle left until it terminates at upper right into the South Atlantic. Image source: LANCE MODIS.)

The fire has been raging through forest in Chubut since 15th February (Photo: Pablo Wegrzyn, via Télam)

Severe drought in southern Argentina has caused thousands of acres of ancient forest to be consumed by flames.
Report:
http://www.nbcnews.com/news/world/forest-fire-destroys-argentine-wildlife-n331551 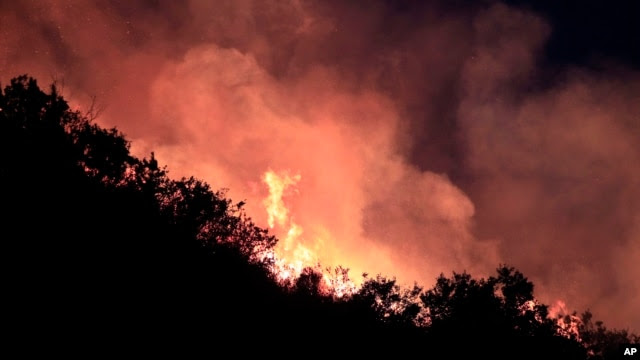 SANTIAGO—Strong winds and unusually hot weather in southern Chile are fueling out-of-control forest fires, which are consuming large swaths of national parks and ancient woodland parched by a prolonged drought.

The fires have burned over 6,000 hectares (14,800 acres) at the China Muerta and Nalca Lolco reserves, as well as the Conguillio national park, revered for its forests of thousand-year-old Araucarias, or monkey puzzle trees.

Strong winds, drought and a strike by firefighters have hindered efforts to fight the blazes. Worried residents have complained that authorities have been slow to react.

"We ask the government to urgently bring the air support needed to fight the fire. ... We firmly believe that if stronger measures aren't taken to stop the fire, the ecological damage will be irreversible," the indigenous Pewenche community of Quinquen said in a statement.

"We expect that on Thursday weather conditions will allow the airplanes and helicopters to fly and drop fire-retardant liquids," said Interior Undersecretary Mahmud Aleuy.

Some 180 firefighters are on strike in central Chile, squeezing already tight resources for combating the blaze.

"We have issued a red alert to get more resources to the area ... today we have 30 firefighters from Argentina and we are now coordinating with [firefighting] crews in Brazil and Uruguay, though we still don't know when they will arrive," said Aleuy.

(Side by side frames of same region of Chile on February 17 [left frame] and March 24 [right frame]. For reference, bottom edge of frame is approximately 100 miles. Right frame is slightly off-set toward the east. Image source: Lance-Modis.)

Das after reports about forest fires in Chile, there were devastating floods in Chile

And then a 6.0 earthquake


A 6.0 magnitude earthquake struck 99 miles east of Tocopilla, Chile today. There were no immediate reports of injuries. 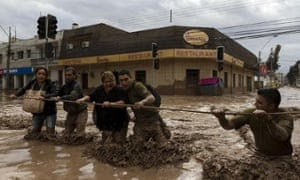 Chilean national police help evacuate people affected by the overflow of the river Copiapo in the city of the same name. Photograph: Marta Bescos/Demotix
Reuters,
27 March, 2015

(Reuters) - The heavy rainfall that battered Chile's usually arid north this week happened because of climate change, a senior meteorologist said, as the region gradually returns to normal after rivers broke banks and villages were cut off.

"For Chile, this particular system can only be possible in an environment of a changed climate," Deputy Secretary-General of the World Meteorological Organization Jeremiah Lengoasa told Reuters on a visit to Santiago on Friday.

The intense rainfall that began Tuesday in an area that is home to the Atacama, the world's driest desert, had resulted in nine deaths by Friday, with 19 people still missing, nearly 6,000 people in temporary housing and some roads cut off, the government's emergency office Onemi said.

Under a more familiar beating sun, people began to trickle back to debris-strewn villages and smashed houses. A curfew is in place in the Atacama region tonight, Onemi said, while operations at some mines in the top copper producer are still on hold.

Local media reported that one of those who lost his home was Victor Zamora, one of the 33 miners whose dramatic rescue from a mine in nearby Copiapo in 2010 attracted global attention.

While the worst seems to be over, Chile can expect to see more of this kind of event in the future, Lengoasa said.

"This is an example of an extreme (event) - it's an unprecedented event in a place where you would not normally expect it to happen," he said.


And an unbelievable hailstorm in Bogota, Colombia (not reported in major outlets)

Major hailstorm in Bogota, the capital city of Colombia covered the area with a 24-inch layer of icy snow affecting lives of around 900 people.

More than 900 people have been affected by recent hailstorm in Fraguita, Antonio Nariño and Restrepo in the southern part of the city, El Espectador quoted Fire Department as saying.

According to The Colombia Reporters, the excessive hail caused a number of emergencies across the city. Bogota Disaster Rick and Prevention unit confirmed that no victims were identified.

However, several people were rescued from the collapsed roofs.

Relief agencies have provided assistance such as hygiene kits, mattresses and blankets to the affected families. 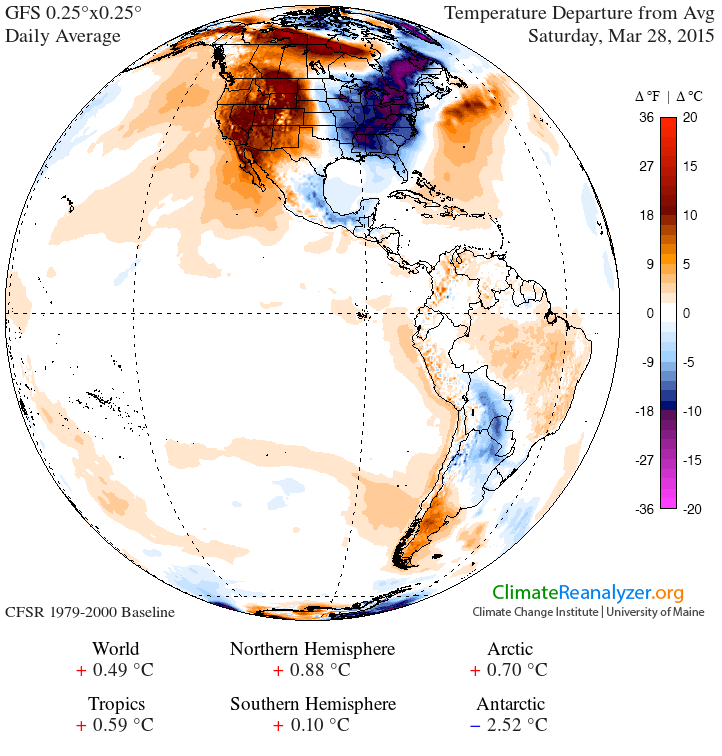 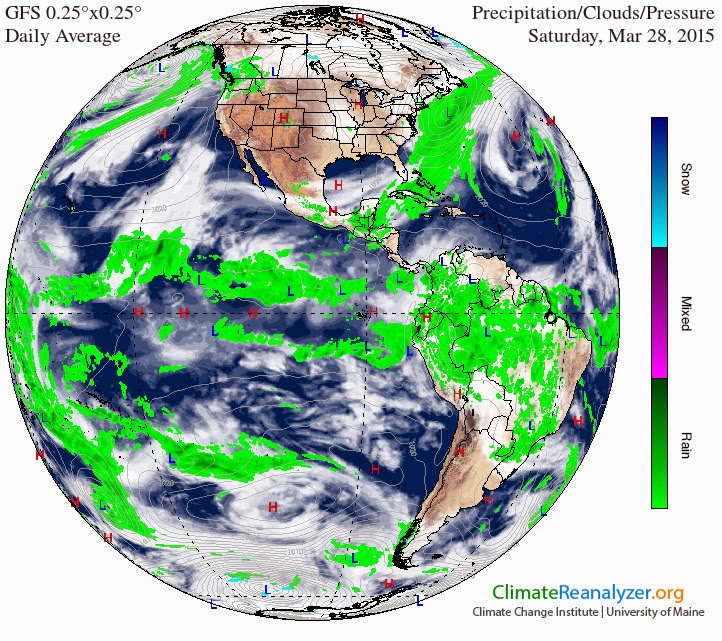