Athens warns of bad consequences if talks with EU fail

Greece has submitted its economic reform proposals to the European Commission. The leftist government in Athens has however threatened to stop meeting debt obligations if negotiations fail.

Greece’s international economic affairs minister has said Athens wants an agreement with the EU but it’s prepared to go its own way in the event of a QUOTE bad scenario.

The government, dominated by the anti-austerity Syriza party, has assembled a package of 18 reforms in the hope of unlocking 10-point-7 billion dollars in financial assistance provided by international creditors. Greece will run out of money on April 20 unless it can secure emergency funding from the lenders.

There are concerns in Greece that the government’s proposed measures may not be sufficient to convince key creditors to release bailout funding.

With fresh rumors springing late on Friday that "this" just may be the weekend Greece - with close to no funds left in either the financial or government sector - imposes capital controls, a precursor to a full-fledged Grexit, the situation in Athens is on a knife's edge. Yesterday is also when the Syriza government submitted its list of 18 proposed reforms to the Troika: a reform package which the Guardian dubs "reform-for-cash", as Greece hopes the roughly €3 billion in revenue generated from the reforms will unlock €7.2 billion in financial assistance.

Rather, make that promises of reforms to generate €3 billion in revenue. Because the question, and problem for Athens, is which comes first: does Greece implement the reforms and generate the revenue or does Europe disburse the funds. It is a problem because the reforms will be extremely unpopular if and when they pass. According to Bloomberg, which sources Greek Skai TV, among the proposed reforms is an increase on the duty paid on cigarettes and alcohol.

The 18 proposals, three times as many as put forward and dismissed by prime minister Alexis Tsipras’s government last month, anticipate GDP growth of 1.4% this year: about 1% less than where the most optimistic analysts see the US growing. The package also endorsed finance minister Yanis Varoufakis’s argument that the primary surplus demanded of Greece would have to be reduced. As such, the primary surplus was estimated to hit 1.5% in 2015 – half that in the country’s existing bailout programme. Unfortunately for Greece, considering the collapse in tax collections in recent months, Athens can kiss any hope of a positive primary surplus goodbye.

Since all of these proposals, if implemented, will lead to increased tax revenues and thus a decrease in the already low quality of Greek life, whether for everyone or just the 1%, they will be met with stern opposition, especially since they will be seen as going against Syriza's original radical pre-electoral agenda. Which is also why as the Guardian reported, "the country’s international economic affairs minister, Euclid Tsakalotos, raised the stakes, saying while Greece wanted an agreement it was prepared to go its own way “in the event of a bad scenario... We are working in the spirit of compromise, we want a solution, but if things don’t go well you have to bear the bad scenario in mind as well. That is the nature of negotiations.”

Once again Greece is unable to determine when it has lost the negotiations, and while giving with one hand, it tries to take with the other. And this is the biggest problem, because for Europe while the amount of the money transfer is modest, what it wants more than anything is to see the "radical" spirit of the Syriza government crushed.The problem for Greece is that this is not happening, especially with statements such as this:

“The government is not going to continue servicing public debt with its own funds if lenders do not immediately proceed with the disbursement of funds which have been put on hold since 2014," said government aides. “The country has not taken receipt of an aid instalment from the EU or IMF since August 2014 even though it has habitually fulfilled its obligations.”

Then there was the prime minister himself, who said in an interview with Real News that Greece won’t agree to any wage or pension cuts nor allow mass redundancies. Again: the issue is that the Troika, or whatever it is called, wants precisely this: they want real reforms, by which they mean that Greece finally has to implement some/any of the long ago promised and never delivered redundancies in the government sector.

What is surprising is just how naive Tsipras now appears with his continued populist rhetoric even after it has been revealed that he has no more leverage, with the threat of Grexit taken off the table. Some of his other soundbites:
And then there is the Greek energy minister, Panagiotis Lafazanis, who said in an interview with Kefalaio newspaper that the "only way for Greece to exit its crisis is through tough confrontation, if not conflict, with "German Europe."

Making sure the ongoing negotiations between (almost completely broke) Greece and the Troika take 1.4% steps forward and ten steps back, the energy minister said the Greek reform list can’t be opposed to Syriza’s radical program or be above popular will, sovereignty. As noted above, this is precisely what it would take for the Troika to release the funds.

Reuters confirmed as much earlier when it eported that as Athens battles to have a list of reforms accepted by its EU partners in order to secure much-needed funds to stave off bankruptcy, Lafazanis criticized Berlin and said the government must not roll back on its commitments.

"No list should go over the will and sovereignty of the people," he told Kefalaio newspaper in an interview on Saturday."The Germanized European Union is literally choking our country and tightening week by week the noose around the economy," he said.

Virtually assuring Germany's fure, Lafazanis said that "if the government suspends pre-election promises, Greece will be driven over cliff’s edge" adding that "privatizations, especially in strategic areas, can’t and won’t happen." Alas, the Troika said it will, and the Troika writes the checks, so...

More importantly, Lafazanis has some ideas where to find said "big, bold alternatives." In Moscow.

Greece's Energy Minister Panagiotis Lafazanis will meet his Russian counterpart and the CEO of energy giant Gazprom in Moscow on Monday, as he hit out at the EU and Germany for tightening a 'noose' around the Greek economy.

Lafazanis' visit will come just over a week before Tsipras is due to meet Russian President Vladimir Putin in Moscow although the Greek government has stressed it is not seeking funding from the Kremlin.

It is not seeking funding form the Kremlin yet. Because once the first week of April comes and goes and Greece officially runs out of money, it will go to anyone who can provide it with the funds needed to avoid civil war, even if that means switching its allegiance from Europe to the Eurasian Economic Union, something Russia is eagerly looking forward to, and something we predicted would be the endgame months ago.


How Greece pushed Europe's creditors to the edge
After weeks of ugly threats and stalling tactics from both sides, Athens is approaching another crunch week in deciding its economic fate

Greece submits reform proposals to eurozone creditors – with a warning
As the EU, ECB and IMF pore over Athens’s latest attempt to unlock financial aid, minister says country is prepared to go it alone ‘if things do not go well’


Is Brussels Warming to Tsipras' Proposals?
Greece's Prime Minister seems to be playing all the cards right to influence the country's best case scenario for financial bailout. Newly submitted documents seem to be getting a warmer reception by Brussels. Just how sweet the coming Russia-Greece potential may be, remains to be seen 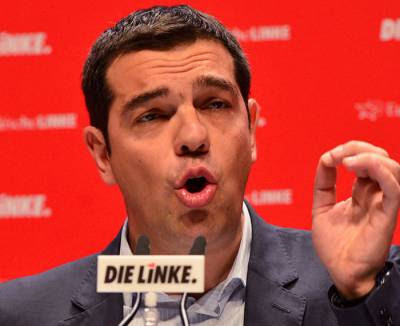 In the run-up to meetings between Greek Prime Minister Alexis Tsipras and Russian President Vladimir Putin early next month, EU and IMF leadership seem to be softening their position where much needed Greece funds are concerned. Scheduled to begin examining Greece's revamped reforms pledges, the so-called Brussels Group is today examining the documents submitted. In the larger frame, it still remains to be seen what the Kremlin play will be on Greek geo-strategy and economics.

Last week, Greece sent the country's creditors a long list of reforms along with a pledge to create a budget surplus this year. The "Brussels Group" nod will be needed in order for Tsipras to get unfrozen much needed funds, and to prevent default. The rub for Greece right now is to create the economic atmosphere needed to satisfy Brussels, while at the same time living up to anti-austerity pledges to the Greek people. It is not clear at this time whether or not Tsipras has hedged on the promise, in order to glean the funding to stay solvent.

The mood in between Greece and its lenders improved rather dramatically on the news Tsipras had accelerated a meetup with Putin in Moscow, the obvious fears being a Greco-Russian alliance of one sort or another. France, for one, is now trying to play mediator in between Tsipras' group and the hard line coming from Merkel's (above) German bankers. On this Merkel's opposition, Thomas Oppermann, the Social Democrat Bundestag floor leader, declared a coming catastrophe should Greece default. He told Bloomberg and other media:

Evidence of Germany’s and Greece's "disconnect" surfaced in questioned news from the former's Bild newspaper, a report claiming controversial Greek finance minister Yanis Varoufakis was considering resigning. As for the minister's take, since the latest negotiations, he's kept a fairly low profile. This could be a sign Greece prefers an EU deal, rather than some more extreme move toward aligning with Putin and Russia. The famous or infamous (depending on to whom you speak) Tyler Durden, over at Zero Hedge, encapsulates the middle view with:

"As Syriza faces the unenviable proposition of either completely giving up on its campaign promises or plunging the Greek economy and banking system into a drachma death spiral, it appears as though Athens is playing the one card it has left, which is threatening to effectively surrender itself to the Kremlin."

Other subtle indicators on the state of Greece finances are reflected in the county having sold off a good number of commodities, including the Bank of Greece unloading 5,849 Sovereign coins back in January. With Russia investing in gold more than most any other nation, it's better than speculation to wonder at a direct loan from Moscow with just such collateral in mind. Putin has been hedging toward putting Russia on the gold standard, a move some experts say would be at least a pint sized stake through the heart of America's Federal Reserve. Russia currently maintains over 1200 tons of the precious metal in reserve.

Meanwhile Fitch cut Greece's credit rating Friday, out of fears the country would go belly up on indebtedness, according to EUBusiness. New from Gold Seek frames what seems a "do or die" negotiation showdown this weekend. Total bank deposits in Greece fell to €152.4 billion euros in February, down from €160.3 billion in January, or the lowest deposits level since June 2005.

It would seem timing is crucial here in between the parties concerned. If the EU-Greek bailout talks flop, before Tsipras visits Moscow, then clearly Putin will hold all the cards. The IMF, EU, and interested parties in the west surely know this. I'd be very surprised if the "Brussels Group" failed to give the go ahead to at least postpone Greece's departure. The only card yet to be played is under the dome of the Kremlin Senate.