The Finest Navy in the World

Navy Jets Carrying Extra Fuel Can't Launch from New Aircraft Carrier
The high-tech catapult system on the United States Navy’s newest aircraft carrier causes too much wear to the top warplanes if the aircraft are carrying fuel tanks needed to extend their flight range, prohibiting the Navy from launching the jets at all. 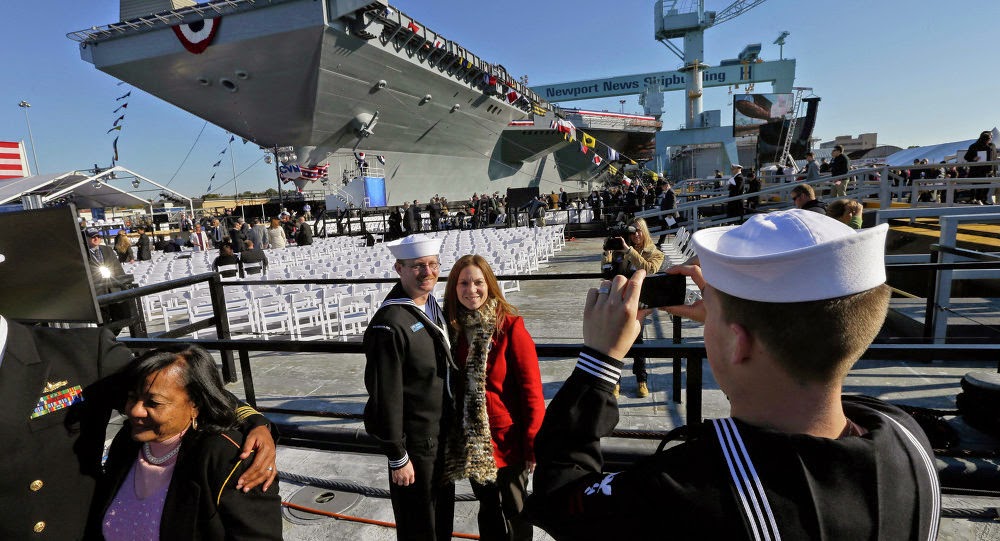 Until it is corrected, the deficiency would "preclude the Navy from conducting normal operations" on the USS Gerald R. Ford, Air Force Maj. Eric Badger, spokesman for the Pentagon's testing office, said in an email to Bloomberg News.

In addition to troubles with the catapult system, there are also flaws in the ship's landing system. Even more needed improvements are being delayed until after the ship is delivered, which must happen by March 2016 to stay within a $12.9 billion cap on construction costs imposed by Congress.

The USS Gerald R. Ford is the first in a new class of aircraft carriers being built by Newport News, Virginia-based Huntington Ingalls Industries Inc.

The tanks that make extended flights possible for two models of the F/A-18 – the Super Hornet fighter and the Growler jamming aircraft – can carry an extra 480 gallons of fuel.

But the aircraft carrier's electromagnetic launch system puts more stress on the tanks than older steam-powered catapults, and that would cause premature damage to the planes, according test office and Navy documents obtained by Bloomberg.

According to a September 5 report by the Naval Air Systems Command, "the overstress condition will eliminate the employment of external fuel tanks" that are "an essential element" of combat loads for many Super Hornets and most Growler jammer jets.

The three-vessel Ford class is the first major new design for a carrier since the 1960's-era Nimitz class and is projected to cost $40 billion. The launch system is estimated at an additional $3.2 billion, Bloomberg reported.

New launch system software is designed to reduce wear on the tanks by adjusting the power exerted during launch, the Navy said. But that software will not be installed and tested onboard the Ford until after the ship is delivered in March of next year.

"It's a big deal to fix it, but the Navy thinks it can be done," Mark Gunzinger, an air-power analyst with the nonpartisan Center for Strategic and Budgetary Assessments in Washington, said in an e-mail to Bloomberg.

Although the Pentagon for at least six months has been aware of deficiencies in the launch system – one in a list of shortcomings for the class of ships – the problems are just now being made public.

The issue, however, will not delay a scheduled April 8 Pentagon meeting to review awarding a potential $4 billion construction contract to Huntington Ingalls for the next carrier, the John F. Kennedy, an anonymous defense official told Bloomberg.