This is proxy war against Iran


The US and its ally Saudi Arabia (that likes chopping heads off , like another orgnanisation) have denounced the agrresssion of the Houthi rebels who have taken over in Yemen and have the legitimate president on the run.

They have responded with airstrikes and vowed to defend the legitimate government.

Both the US and the Saudis think it is legitimate to interfere in the internal affairs of a sovereign country.


Anyone smell a whiff of hypocrisy and double standards?

BREAKING NEWS: Saudi Arabia starts bombing Yemen - envoy
Saudi Arabian forces, joined by nine other countries, have launched a military operation in Yemen against Shiite Houthi rebels, the Saudi ambassador to the US said. The offensive, which started with airstrikes, will also involve “other military assets.” 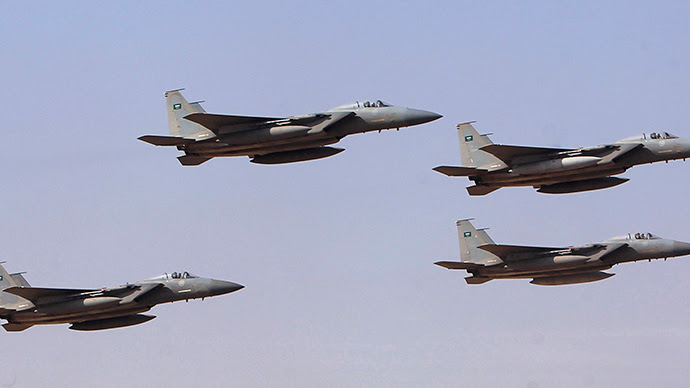 According to Ambassador Adel bin Ahmed Al-Jubeir, the military operation in Yemen started at 7 p.m. EST (11 p.m. GMT). The US is not participating in the operation, the envoy stressed.

Meanwhile, Saudi Arabia, the United Arab Emirates, Bahrain, Qatar, and Kuwait issued a joint statement saying that they “decided to repel Houthi militias, Al-Qaeda and ISIS (Islamic State) in the country.” The Gulf states said they were responding to a “major threat” to the stability of the region, saying that their cause is to “repel Houthi aggression” in Yemen.

"The Kingdom of Saudi Arabia, along with its allies within the GCC and outside the GCC..." (cont.)

"...Launched military operations in support of the people of Yemen and their legitimate government."


Saudi Arabia is deploying a significant task force to the border with neighboring Yemen, where Houthi Shiite rebels allegedly forced the president to leave the country. President Hadi has been asking the UN to approve the use of foreign forces in Yemen.

The situation in Yemen remains murky, with Houthi militants claiming capture of the southern seaport of Aden, President Abd-Rabbu Mansour Hadi’s stronghold. The fighters say the city of Aden is now under their control and they're arresting the president's supporters there.

The rebels claim Hadi has fled the country, and announced a 20 million riyal ($100,000) reward for Hadi's capture, Lebanese-based Al-Manar TV reported, citing the rebels' representatives. While two of the president's aides have said he remains in Aden and has no intention of leaving the country, later reports claim he has left Yemen.

Elements of the Yemeni army who have sided with the rebel fighters have seized control of the Aden international airport, according to Al Mayadeen TV. The airport representatives told AP it was closed with flights canceled for security reasons and the worsening situation in the city. 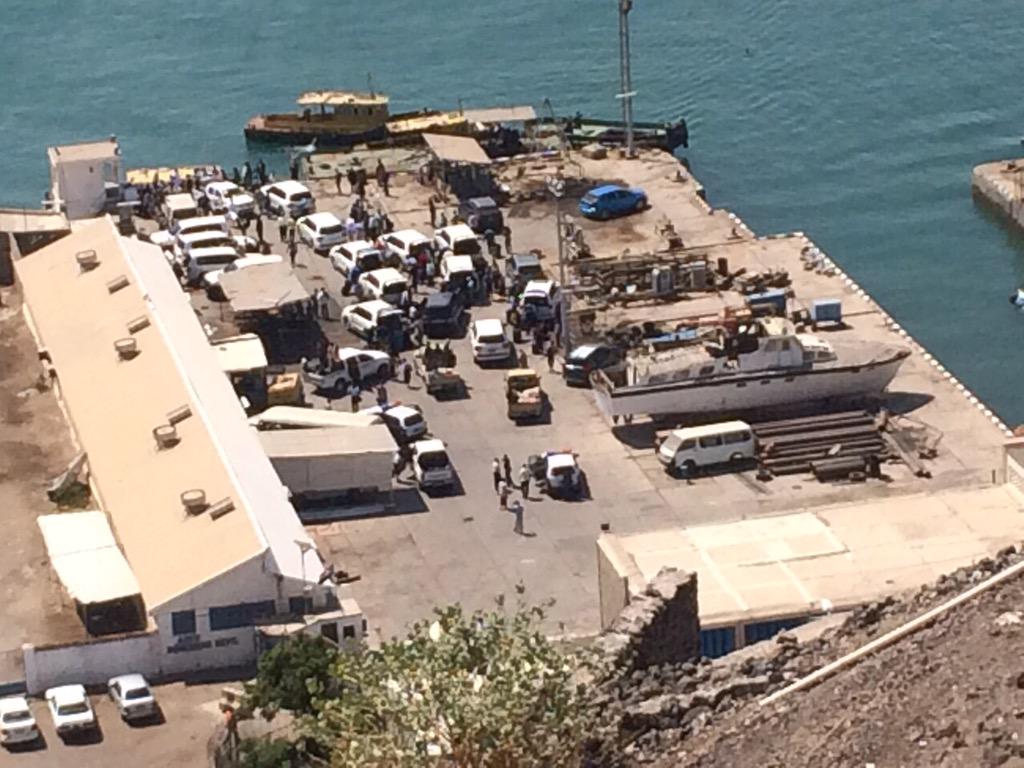 
The objective of the Saudi Arabian troops remains uncertain and even the US, Riyadh’s major ally, is not sure what the House of Saud has on its mind regarding the long-lasting political turmoil of its southern neighbor.

The opinions of US officials contacted by Reuters on the issue are divided. Two said that the concentration of artillery systems and armor on the Saudi border with Yemen have defensive purposes, while other government sources were not so sure.

A US source that described the concentration of Saudi troops as “significant” made a guess that Riyadh might be getting ready to strike the Houthis if they attempt to seize the residence of Yemen’s legitimate president. It cannot be excluded that Saudi Arabia might use its Air Force to strike rebels near Aden.

#Saudi army is amassing on #Yemen border for a possible invasion after green light from all #Gulf states minus #Oman
Hadi has been seeking support from the United Nations Security Council for military action against Houthi militias by “willing countries,” Reuters reports.

The president wants the UNSC to adopt a resolution authorizing “willing countries that wish to help Yemen to provide immediate support for the legitimate authority by all means and measures to protect Yemen and deter the Houthi aggression.”

Hadi has also asked the League of Arab States to immediately interfere in the situation in Yemen, Al Arabiya TV reported, citing a statement by Yemen's foreign minister, Riad Yassin. A "joint Arab slant" is needed to coordinate and decide on an "immediate military intervention," Yassin said.

Meanwhile, the militants in Yemen have called for all neighboring states to "keep the peace" and "side with the people of Yemen," an official representative of the Ansar Allah armed group said, as cited by Tass.


Some Yemeni military officers don’t like the idea of foreign intervention.

“We express our total and utter rejection of any external interference in Yemeni affairs under any pretext and in any form and from any side,” Reuters cited statement of a group of officers calling themselves Higher Committee to Preserve the Armed Forces and Security.

“All members of the armed forces and security and all the sons of the proud people of Yemen with all its components will confront with all their strength and heroism any attempt to harm the pure soil of the homeland, its independence or its sovereignty or to threaten its unity and territorial integrity,” the military group announced on a website.

“Our elder sister, the Saudi kingdom, doesn't respect the Yemenis and wants to impose here in Yemen the sequence of events and divisions that happened in Libya,” al-Houthi said, as cited by the AP.

A brief war between Houthis and Riyadh resulted in deaths of about 200 Saudis four years ago.

"There were plans for an observer mission or a local ceasefire with the Houthi rebels, but due to the fact that Saudi Arabia borders Yemen and Yemen is now posing a security threat to Saudi Arabia, the US is more likely to advocate any sort of intervention in Yemen," Middle East researcher Danny Makki told RT.

As the US is fighting Al-Qaeda militants within Yemen, "now the problem is that the Al-Qaeda militants that Americans are fighting are actually fighting the Houthi rebels, who America is un-allied to," Makki added, saying that such a situation results in a "geopolitical war of mirrors."

READ MORE: ‘No Arab, GCC country has time or capacity to save situation in Yemen’

Sunni Saudi Arabia believes that Shiite Houthi rebels are supported by Riyadh’s arch-enemy Iran. The kingdom’s richest oil deposits are in the Eastern Province bordering Yemen and inhabited by Shiites. Given that the power in Saudi Arabia’s neighbor Iraq is also in the hands of Shiites, Sunni Riyadh could find itself between rock and a hard place and in a state of proxy war with Tehran.


The porous 1,800km border between Saudi Arabia and Yemen, used by local tribes for illegal trade and contraband, has always been a headache for Riyadh. In 2004, Saudi Arabia even initiated construction of the so-called ‘Saudi–Yemen barrier’ with control towers and electronic detection equipment. Although the multi-billion project was only partially implemented, talks about construction’s renewal reappeared on many occasions and came up with a bang after Houthi rebels’ success in seizing power in Yemen.

In August 2014, Houthi rebels swept down from their stronghold in the mountains, demanding economic and political reforms. In September they seized key state installations in the capital, Sanaa. After Hadi left the capital, Houthis continued advancing to the south of the country, seizing cities one by one. All Western embassies were evacuated from Yemen.

Last Friday a suicide bomber attack on two mosques in Sanaa became one of the worst terror acts in Yemen’s history. At least 126 people were killed and some 250 more were wounded in the bombings. Islamic State militants have claimed responsibility for the deadly suicide bomb attack, according to their statement cited by Reuters.

Houthis have entered the Yemeni city of Aden from where resigned President Abd Rabbuh Mansur Hadi has just fled.

According to Yemeni Presidential guards, the former president fled Aden as Houthis entered the city on Wednesday. This comes as an aide to Hadi has denied the resigned president fled the southern city.

Members of the Houthi Ansarullah movement also detained Hadi's Defense Minister Mahmoud al-Subaihi in Aden and transferred him to the capital, Sana’a

The latest developments come as Yemeni forces backed by Ansarullah revolutionaries seized the al-Anad air base, located about 50 kilometers north of Aden.

A spokesman for the Houthis said the ongoing conflict is aimed at fighting against al-Qaeda militants and the country’s former president.

The spokesman added that the Houthis would respect the rights of people in southern Yemen.

A high-ranking diplomat of Iran’s Foreign Ministry has held talks with authorities in Moscow over the situation in Yemen.