Ukraine: the battle of the oligarchs

The governor of Ukraine’s Dnepropetrovsk region Igor Kolomoysky has reportedly barricaded in the Ukrnafta oil and gas extracting company’s HQs in Kiev. It comes just days after the oligarch tried to regain control of Ukraine’s oil transportation company.

“The Ukrnafta building on Nesterovskoye Lane is being barricaded with metal barriers,” Ukraine MP Sergey Leschenko wrote on his Facebook page. “On the street there are two members of an unknown battalion. Inside, through darkened windows, another ten fighters of an unknown battalion are visible. The guards refuse to show their permit for the new fence,” Leschenko noted.

According to him, the men are all members of the Dnepr-1 battalion. However, the head of the group – “in a black helmet” – refused to say “what the battalion of the Dnepropetrovsk’s territorial defense was doing in Kiev.”


Police have reportedly come to the building, but no details have yet been provided.

“Kolomoysky is challenging [President] Poroshenko,” Leschenko assumed.
All of this, the MP wrote, is the oligarch’s “reaction on the signing into law of the law on joint stock companies in reducing the quorum. Ukrnafta, now barricaded, has a government share of 50 percent plus one share, but now for the first time in 12 years it will be possible to ensure government management.”

Leschenko has also stressed that the current situation at Ukrnafta should not be mistaken with Ukrtransnafta in Kiev, another company that Kolomoysky and another several dozen of his armed “lawyers” raided on Thursday in order to “drive out the new chief from the office and forcefully reappoint his own manager, Mr. Lazorko.”

Earlier the same day, the board of Ukrtransnafta relieved Kolomoysky’s protégé Aleksandr Lazorko of his post and appointed Yuri Miroshnik as CEO.

Европейская Украина. Киев. "Укронафта". Олигарх Коломойский пригнал автоматчиков из своих батальонов на защиту офиса.
Lazorko refused to leave his post, protesting the decision, and barricaded himself in the office until Kolomoysky and his men entered the office and took it by force calling Lazorko’s resignation a corporate raid. Later in the evening Interior Minister Arsen Avakov reported the building was under control of the police.
On Saturday, Ukrainian media reported that Kolomoysky’s Privatbank had blocked Poroshenko’s account of $50 million. However, bank officials say that it was just a glitch.

Ukrnafta is the biggest oil company of the country which deals with over 86 percent of Ukraine's oil production, 28 percent of gas condensate production and 16 percent of gas production. The controlling stake of the company belongs to the state-owned Naftogaz company, while 42 percent of shares belong to Igor Kolomoysky.

According to Leschenko, this is the first moment in Ukrnafta’s history when government management in the company can be established.

Kolomoysky is one of the richest men in Ukraine with an estimated wealth of up to $6 billion. According to Forbes his net worth is $3bn. Some of his wealth is rumored to have emerged from numerous hostile takeovers of his competitors.

Amid last year’s coup and the turmoil surrounding it Kolomoysky used his wealth to secure political power. Then-acting President Aleksandr Turchynov appointed him as a governor of Dnepropetrovsk region. The oligarch used his newly gained powers to stem the so-called “Russian influence” in his area.

Kolomoysky also is believed to have created the ultra-nationalist Dnipro Battalion. Basically forming his own personal army, Kolomoysky also funded the Aidar, Azov, Dnepr 1, Dnepr 2, and Donbas volunteer battalions, which were accused of carrying out mass atrocities.

In Russia the oligarch is sought for “organizing the killing of civilians,” as last summer a Russian District Court authorized his arrest in absentia. 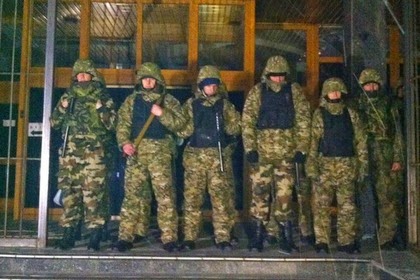 Several news reports indicate that the headquarters of Ukrnafta, the country's largest oil extraction company, was taken over by Dnepr-1 battalion militants financed by Kolomoysky.

This move comes after a similar take-over on Thursday of Ukrtransnafta, an oil transit company. What makes the most recent event all the more galling is that the HQ of the state-owned Ukrnafta is located in the center of Kiev.

Kolomoysky is only a minority shareholder in the enterprise. However, he was able to exercise de-facto control  under rules which required 60% of shareholders' approval for any reform to be implemented, until the Rada passed a bill which lowered that requirement to 50% + 1 share, which de-facto and de-jure returned control of Ukrnafta to the Ukrainian government.

Kolomoysky evidently decided to challenge that ruling by reportedly barricading himself inside the building and using Dnepr-1 battalion to deny access. Some of the militants were seen carrying automatic weapons and were supported by an armored truck.

Most recent reports indicated Dnepr-1 was welding steel barriers in place to secure the building, and that pro-Maidan Rada Deputy and journalist Mustafa Nayyim was beaten by Dnepr-1 militants when he questioned them. 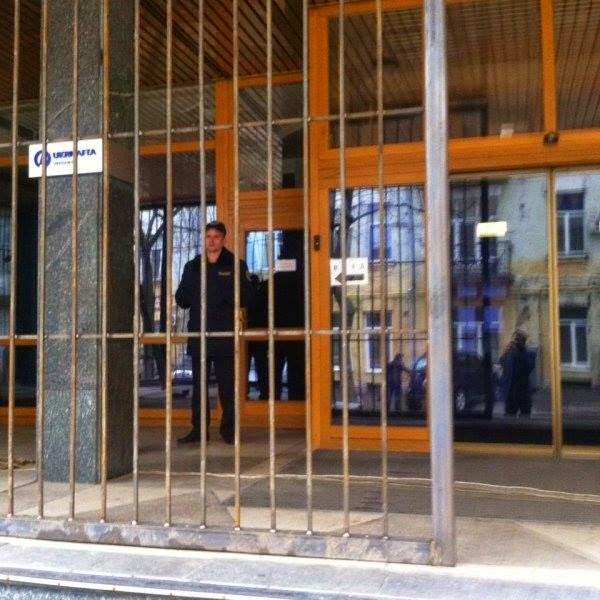 Just to make things more interesting, Kolomoysky called for recognizing DPR and LPR as the de-facto authorities in Eastern Ukraine, in an apparent bid to prevent a two-front war against both Kiev and Novorossia. At the same time, Kolomoysky called for "financial federalization" of Ukraine, under which 90% of tax revenue would never leave the regions.

"Nationally conscious" Ukrainians don't quite know what to make of all this yet--Kolomoysky was a hero to them, and here he is, turning his power to bear against the Ukrainian state.

Of course, all of this took place on Sunday. On Monday Poroshenko will have to decide what to do in response to Kolomoysky's very busy day. Let's not forget that in the Thursday showdown he was the first to blink, allowing Kolomoysky to retain control of Ukrtransnafta and only issuing a reprimand in response to his armed take-over of Ukrtransnafta. Moreover, just recently US Ambassador to Ukraine Jeffrey Pyatt lectured Kolomoysky on the unacceptability of "jungle law" approaches to political problems (funny how that was not a problem during the Maidan, eh?), a warning which Kolomoysky clearly ignored.

In the meantime, the junta is pretending nothing at all has happened. Minister of Interior Avakov insisted the folks in camouflage were part of a private security service hired by Ukrnafta, even though Ukrnafta representatives themselves were first to announce the gunmen were Dnepr-1. Incidentally, it's unlikely a private security firm would be allowed to tote Kalashnikovs. 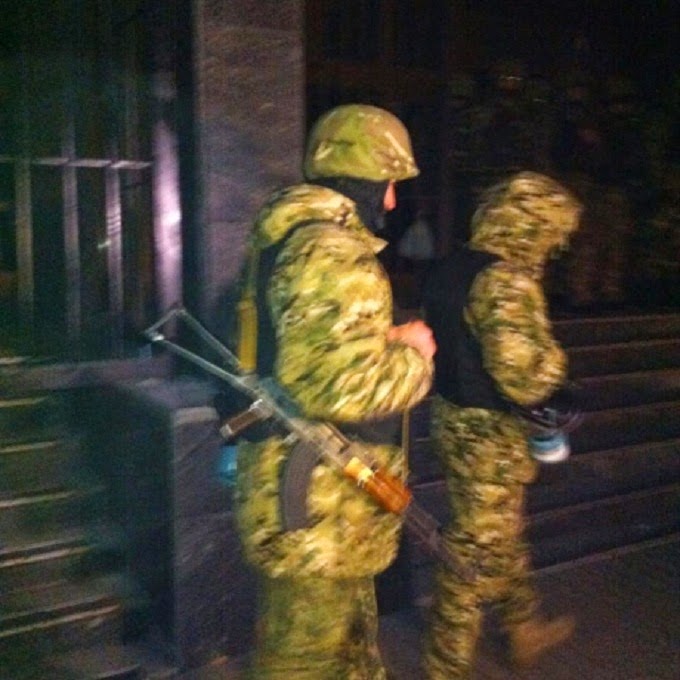 Moreover, if this is not Dnepr-1 or some other Kolomoysky-funded organization, why is Kolomoysky himself clearly on the scene? Last seen having the above-mentioned Mustafa Nayyem (a staunch critic of Kolomoysky and a Maidan die-hard) taken away by a car? 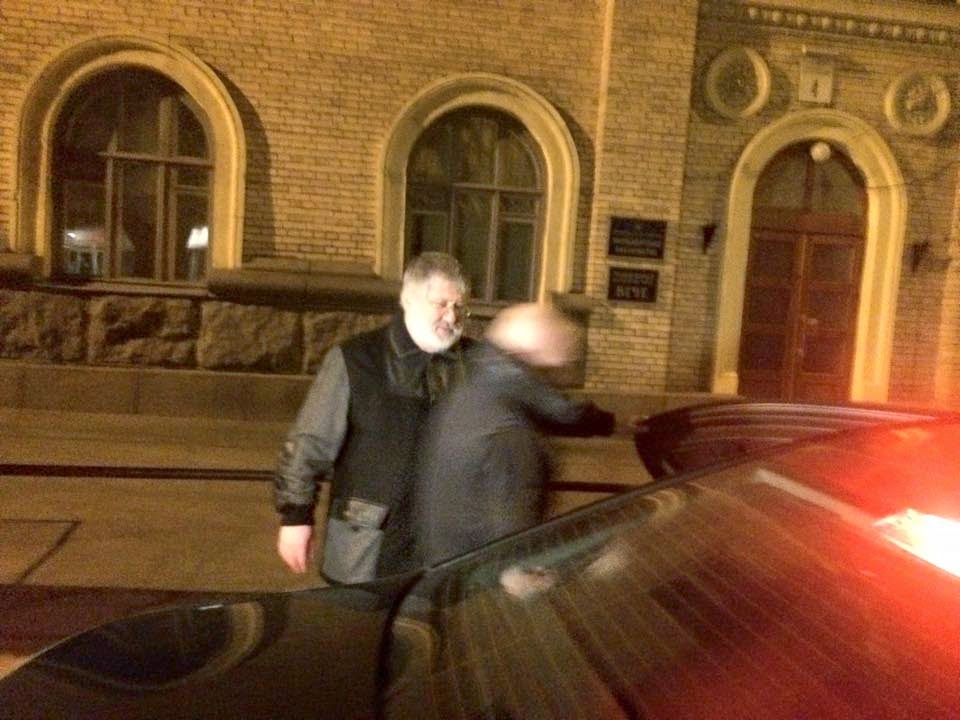 Will Poroshenko back down again? Will Kolomoysky?  Or will there be bloodshed in Kiev? And elsewhere?

In Ukraine, Oligarchs' War of Words May Turn Into War of Bullets and Bombs
Ukrainian politician and former Dnepropetrovsk businessman Oleg Tsarev says that the political and economic conflict between the country's oligarchs may turn into outright street warfare and a new Maidan. 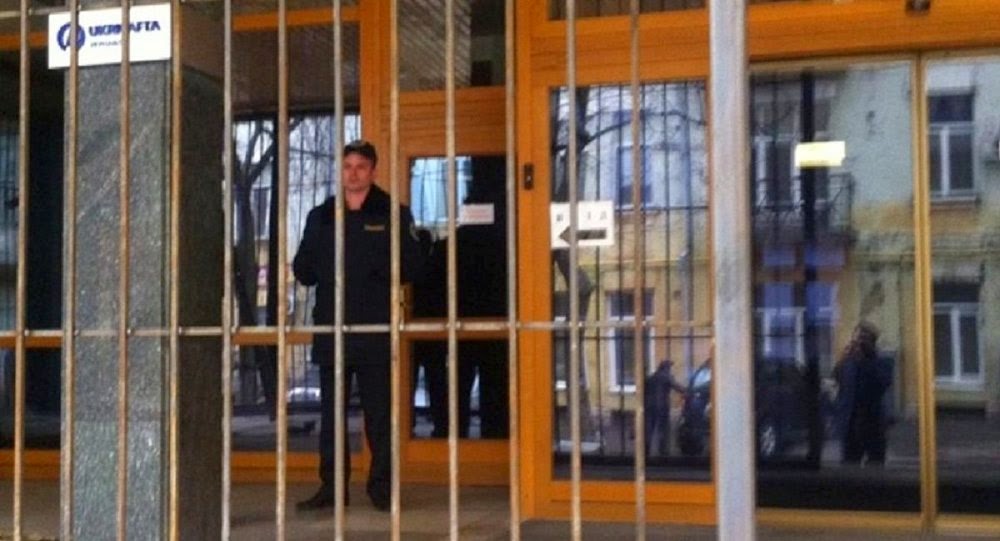 Commenting on the recent scuffle between oligarchs over Ukraine's oil transport company Ukrtransnafta, former Ukrainian parliamentarian Oleg Tsarev warned that the skirmishes involving corporate raids, hostile takeovers and the siphoning of state wealth may soon turn into a battle of bullets and bombs in the streets of Kiev.

In his article, published Saturday on his blog for independent broadcaster Echo Moskvy, Tsarev stated that "the conflict between Poroshenko and Kolomoisky is ready to turn into open warfare." In Tsarev's view, "Kolomoisky is capable of burying the latest American project in the same way as occurred earlier in the conflict between Poroshenko and Tymoshenko. Except this time, considering the current situation, this war may not be limited to mudslinging, and may well turn into an armed confrontation."

According to Tsarev, "the two sides are ready for such a scenario, which is why today there are special forces in the center of Kiev, and the territorial battalions Kiev-1 and Kiev-2 have been activated. We also know that Ministry of Interior forces are ready to head to Dnepropetrovsk. Igor Kolomoisky has brought his own Dnipro battalions to combat readiness. They now consist of up to fifteen thousand fighters, and a few days ago Kolomoisky ordered them to triple their number."

Discussing the conflict over Ukrtransnafta, Tsarev noted that "control over the company is of extreme importance to Kolomoisky not only because he has become used to treating these government structures as his own personal property, but also because a change of the company management would have unquestionably resulted in questions about the multitude of abuses committed by people loyal to him." Tsarev estimated that the damage done by Kolomoisky against Ukrtransnafta alone may amount to up to $2 billion, including up to a billion dollars in damages caused by improper use of the pipelines.

"The nighttime capture of the Ukrtransnafta office was aimed not just at attempting to preserve the ability to steal state resources, but also an attempt to cover up evidence of the crime. It is believed that on the night of the raid, several trucks-worth of documents were taken from the building," Tsarev noted. The politician emphasized that "this will make investigation into the criminal negligence and outright theft much more difficult."

Tsarev believes that Kolomoisky's personal involvement in the affair, including travel to Ukrtransnafta's headquarters, is unusual, and that he "could have been forced to participate in this special operation personally only out of dire need –the threat of criminal charges, the threat of arrest against him and his businesses."

Tsarev notes that the compromise said to have been reached Friday, where it was determined that Poroshenko's man would ultimately take up his post, would mean either that a real investigation "will not occur, or that it will be carried out by foreign auditing companies" at such a pace that the results of their investigation will become moot by the time they reach their conclusions. "Does it mean that Kolomoisky, Yatsenyuk and Poroshenko have agreed to share in the robbery of the country together? Time will tell. But one thing is for certain: the country is rapidly sinking into impoverishment. In order the preserve their capital, oligarchs and the Kiev government will face only more conflicts [over time]."

In this connection, "the United States will have to openly, publically intervene into the management of the country. The US ambassador to Ukraine has already openly noted that he was involved in the resolution of the [Ukrtransnafta] conflict, with MP Sergei Leshchenko saying that the order to change the company's management came from Washington."

Oleg Tsarev, a former MP in Ukraine's Rada from the Dnepropetrovsk region, was forced to leave the office and withdraw his candidacy for president last year following numerous threats against him and his family. In April, 2014 Tsarev was beaten by a mob after a television interview in Kiev. Withdrawing his candidacy in late April, Tsarev called on anti-Maidan politicians to boycott the elections, which he felt could not take place in conditions of civil war following an unconstitutional coup. Tsarev was stripped of his parliamentary immunity in June, 2014, and has since become a wanted man on the territory of Kiev-controlled Ukraine. He presently serves as the Speaker of the Unity Parliament of the self-proclaimed Novorossiya Confederation of the Donetsk and Luhansk People's Republics.