A historically warm winter has Oregon facing its fourth straight year of drought, prompting worry that the extended warm spell fueling California's statewide water crisis is about to hit Oregon. 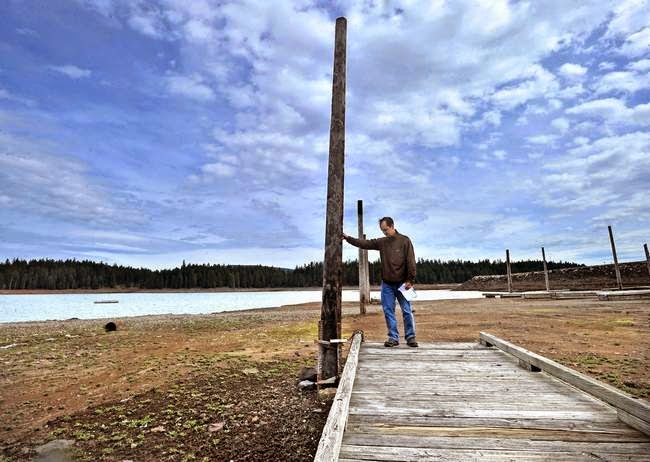 In a good winter, Eastern Oregon snowpack in the Ochocos and Steens Mountain would just be starting to melt come this time of year. The Oregon Cascades would be topping out, with nearly 5 feet at Mt. Hood.

Volcanoes aside, most of these peaks don't have a flake to measure today.

A historically warm winter has Oregon facing its fourth straight year of drought, prompting worry that the extended warm spell fueling California's statewide water crisis is about to hit Oregon.

"I think because you couldn't see the snow on the hills, and it's so warm flowers started blooming in February, everybody knew something was up," said Kathie Dello, associate director of the Oregon Climate Change Research Institute.

Short of getting twice the normal rain this spring — which experts don't expect — Oregonians can expect fewer healthy fish in the river, fewer seeds in the ground, fewer cattle in the fields and more acres on fire.

Longer-term implications are scarier. Conditions in Oregon match scientists' predictions about how climate change will play out here, with warmer, wetter winters robbing mountains of snow, and hotter, dryer summers that further parch the and.

With that in mind, some are beginning to wonder when to stop calling it an episodic water shortage, and start calling it normal.

This year's drought emphasizes the importance of snowpack in the Northwest ecosystem.

Although precipitation across most of Oregon has been at, or near, 30-year averages this winter, the air has been warm. Little precipitation fell as snow. On a good year, snow piles feet-deep at the highest elevations, then gradually melts to sustain streams through the dry summer months.

Instead, rain trickled down the mountainsides, seeped into the ground or flowed into the Pacific Ocean — gone before we need it most.

Snowpack averages across the state are far below the 30-year norm, and streamflows in some waterwaysare already weak. Winter rains have kept others healthy but "as soon as the rain stops, the source is gone and streams will begin to dry up," said Julie Koeberle, a hydrologist with the U.S. Natural Resources Conservation Service.

Across three-quarters of Oregon — high desert farm and cattle country where rain is scarce and snowmelt fuels the local economy — water managers have little hope of filling their reservoirs before irrigators begin making withdrawals for their fields and pastures.

Worsening matters, the National Weather Service is predicting continued high temperatures through the spring, with rainfall below the seasonal average of 7.9 inches. It would take at least 14 inches to lift Oregon's dry regions out of drought, said Jake Crouch, a climatologist with the National Oceanic and Atmospheric Administration.

"I wouldn't say it's unprecedented, but it's extremely unlikely," Crouch said.

The bleak situation has prompted Oregon Gov. Kate Brown to declare a drought emergency in Malheur and Lake counties. Declarations in Harney, Klamath, Crook Baker and Wheeler counties are expected to follow.

The federal government is offering emergency aid to farmers and business-owners in 13 Oregon counties.

Things are looking particularly dire in Malheur County, where one of the state's largest reservoirs is only a quarter-full.

On March 17, Owyhee Irrigation District Manager Jay Chamberlin took one last look at the U.S. Bureau of Reclamation's "teacup map" of reservoir levels in Oregon. Then he gathered the county's water users to dole out bad news.

The Owyhee Reservoir, which supplies 125,000 acres of farmland, will dry up by August under current conditions. Chamberlin told irrigators gathered at the district's annual meeting, they can expect only 1.3 acre-feet per acre to grow their crops. That's down from 1.5 acre-feet last year, and from about 4 acre-feet for a normal year.

"They're trying to figure out what they can even grow on that small amount of water," Chamberlin said.

Agricultural economists expect 20 percent of land to lie fallow in the Owyhee basin as farmers sacrifice acreage so they can double-up their water rations on other plots. Many farmers are switching to grain and seed crops that require less water than onions and sugar beets. Unfortunately, those crops also bring in less money.

Farms for-sale advertisements are popping up along the Oregon-Idaho border as parched land eats away at profits. Old-timers who withstood the droughts of 1977 and 1992 repeat a now worn-out mantra: "We're one good storm away."

Drought-related farm losses are difficult to pin down, but agricultural economists estimated they were in the millions last year in Malheur County alone.
Firefighters on alert

Oregon Department of Forestry officials are bracing for a repeat of the devastating fire seasons of the past two years, when blazes started earlier in the spring, lasted later into the fall, and burned far more acres than normal.

"The toll it took on the employees and the landowners that were directly affected is still present," said Bob Young, a fire manager for the state forestry department.

The agency has budgeted $45.7 million for base fire operations this year, but a bad fire season can eat up more than double that amount. Last year, state foresters spent $75.6 million to cover large fires in addition to its base fire costs. By the summer's end, 957,000 acres had burned.

For that reason, fire response coordinators are prioritizing prevention and hoping history repeats itself. Oregon hasn't experienced three consecutive fire seasons this hellacious since the 1930s. That spell broke in the fourth year.

"Statistically, this year shouldn't be as bad," Young said. "I'm not banking on statistics at all."

Oregonians are right to worry that this drought might not be an isolated event.
Climate scientists have been repeating for years with increasing urgency that human-caused pollution is warming the world and throwing ecosystems into disarray. The federal government's most recent National Climate Assessment summarized the issue in disturbing plain speak: Stop talking about climate change in future tense. It's happening now.

In the Pacific Northwest, that will manifest in warmer, wetter winters and hotter, drier summers. "Megadroughts" will become common across the West by the end of the century, NASA scientists predict.

Although it's impossible to peg an isolated event such as drought to the long-term shifts associated with climate change, Oregon climatologist Dello said, "this looks a lot like our future climate models."

For some parts of Oregon, Buhrig said, water-scarce years have been more common in the past two decades than years of plenty. With limited surface water to go around, well owners in some areas are tapping underground water faster than the hydrologic cycle can keep up.

The groups have settled upon a series of agreements about how the water should be shared, but federal legislation authorizing the agreements has yet to pass and the prospect of another dry summer has already begun to fuel tensions.

Snowmelt captured in a complex system of dams and reservoirs enables farming and ranching in the desert. Hydropower generates 45 percent of Oregon's electricity. Healthy stream flows also are critical for wildlife and hosts of fish species.

As change plays out, Dello said, Oregonians will have to start thinking hard about how we use the land, and which uses won't be possible in the future. Relying on snowmelt to irrigate fields in rain-starved areas could become a thing of the past.

And finding ways to store water as it falls from the sky will become increasingly important.

"People are starting to open up conversations that have been difficult in the past, about what we're going to do if this keeps happening," Dello said.
Adaptation has started small.

More farmers are installing efficient drip irrigation systems and some are experimenting with drought-hardy crops. Ski areas are promoting mountain biking and ziplines — activities that don't depend upon snow. Ranchers are forming rural fire districts with hopes of having more success preventing blazes. Gov. Brown has included more than $50 million in her proposed budget to help communities with water resources planning.

Some say the response has been too slow and timid when it comes to tightening regulations on Oregonians' water use.

"A lot of skeptics have just sort of been drowned out by the boosterism for more rural economic development," said Steve Pedery, executive director of Oregon Wild. "With climate change, does it really make sense to be encouraging more of this development in the desert?"

"Canaries in the mineshaft"

The state owns water rights in rivers and streams across the state, but those rights are usually junior to the rights of surrounding landowners. When flows are low, senior water users get first dibs even if taking the water imperils fish.

"The ability to just keep water in the river if it's being extracted for other uses is not something we can do," said Ed Bowles, the Oregon Department of Fish and Wildlife's fish division administratorс.

Fish such as the threatened bull trout, which prefer summer water below 55 degrees, are particularly vulnerable.

"They're one of our canaries in the mine shaft," Bowles said. "They're very dependent on cold, clean water and they tend to be mobile. ... We want to be careful they don't get cut off."

This year's lack of snowmelt could affect ODFW's fishery management, prompting the agency to restrict bag limits on some species or expand fishing opportunities in smaller reservoirs where low water levels are expected to kill fish anyway.

Terrestrial species will contend with the drought's potential to limit their food and water sources, along with the threat of habitat lost to wildfires. Too many winters like this one could present even bigger challenges for species like the American pika, a mountain dwelling relative to the rabbit that prefers cold winters. Oregon's pikas already live at lower elevations than their Rocky Mountain relatives.

"They have nowhere to go but up," Pedery said. "They can't cross the valley between a few mountain ranges."

Discussions about climate resiliency are taking place at the state level, but Bowles said those talks have yielded no practicable strategies for protecting Oregon's wildlife from the changes head.

"We're not really at the point yet where it's transferring into policy decisions," he said, "but it will."
Posted by seemorerocks at 15:39