This statement is nonsense and wishful thinking.

"Fall in amount of carbon absored by rainforest means even greater cuts to manmade emissions are needed to combat climate change, warn scientists"

Tha Amazon is becoming a source of carbon. This was first identified as a positive feedback by Guy McPherson about 2 years ago

Fall in amount of carbon absored by rainforest means even greater cuts to manmade emissions are needed to combat climate change, warn scientists 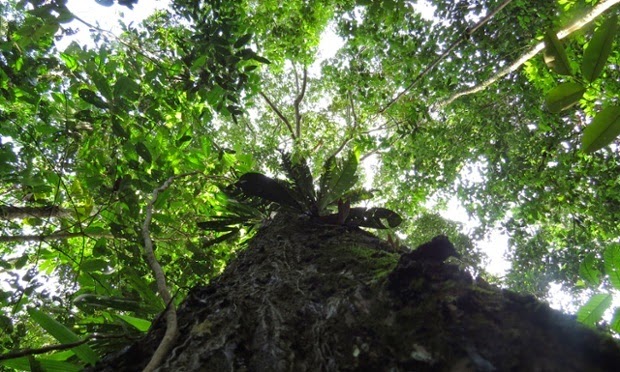 The amount of carbon the Amazon’s remaining trees removed from the atmosphere fell by almost a third last decade, leading scientists to warn that manmade carbon emissions would need to be cut more deeply to tackle climate change.

Trees in untouched areas of the forest have been dying off across the basin at an increasing rate, found the study, published in Nature on Wednesday. Meanwhile the tree growth produced by higher CO2 levels in recent decades levelled off.

The authors said this may be because the Amazon’s seasonal weather variation had become more extreme. They also suggested more CO2 in the atmosphere was, counterintuitively, leading to trees dying younger.

Dr Roel Brienen of Leeds University said the Amazon was responsible for one-fifth to one-quarter of carbon sequestered on land, so any decline in its efficiency as a carbon sink was of consequence to efforts to combat climate change. 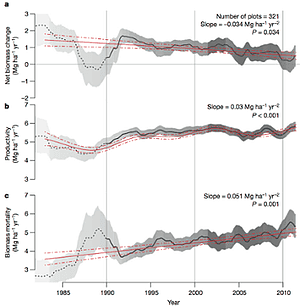 Graph b shows plateauing growth rates during the 2000s, while graph c shows a strong upwards trend in tree death over the last 20 years. The slower growth and increased die-off combine in graph a to produce a drag on the amount of carbon soaked up by a hectare of forest each year. Droughts during 2005 and 2010 are clearly visible as large increases in mortality. Photograph: Nature

Brienen said the declines were occurring in pristine forest areas and were not directly related to the overall deforestation of the Amazon caused by logging and mineral exploration. The study found the Amazon’s overall ability to soak up CO2 dropped by 30% from the 1990s to the 2000s. During the same time, global CO2 emissions rose by 21%.

“We observed that these undisturbed forests over the last 20 years have been taking up carbon, acting as a CO2 sink, but the rate at which they are taking up carbon is decreasing over time,” said Brienen.

The study is based on a continuous survey of trees at 321 sites across the Amazon over three decades. It found the growth rate stalled between 2000 and 2010, but more trees were dying every year.

Globally, vegetation is locking away more carbon as atmospheric CO2 levels rise. Plants are growing faster, fuelled by a more fertile atmosphere. But the Amazon is eschewing this trend.

Brienen said the growth in mortality could be the result of increased variability in the Amazonian climate. Two large droughts, in 2005 and 2010, caused mass tree die-offs.

But Brienen said the long-term trend of increasing mortality could not be explained by these isolated events. Overall the region is experiencing wetter wet seasons and drier dry seasons. The unfamiliar patterns place the trees under increased stress, possibly affecting the health of the forest.

Brienen said the forests may also be experiencing an unanticipated consequence of higher CO2 levels. He suggests the accelerated growth is leading to trees dying younger. The dead trees decay, slowly releasing much of their stored carbon to the atmosphere.

The idea is consistent with a prediction by an Australian scientist in 2009 that the Amazon would lose much of its ability to absorb carbon as the air became more rich with it.

“Our study does indicate that there is a limit to the amount of carbon that forests can be taking up. Then that is truly worrying,” said Brienen.

The Amazon is losing its capacity to absorb carbon from the atmosphere, reveals he most extensive land-based study of the Amazon to date. From a peak of two billion tons of carbon dioxide each year in the 1990s, the net uptake by the forest has halved and is now for the first time being overtaken by fossil fuel emissions in Latin America.

The most extensive land-based study of the Amazon to date reveals it is losing its capacity to absorb carbon from the atmosphere. From a peak of two billion tonnes of carbon dioxide each year in the 1990s, the net uptake by the forest has halved and is now for the first time being overtaken by fossil fuel emissions in Latin America.

The results of this monumental 30-year survey of the South American rainforest, which involved an international team of almost 100 researchers and was led by the University of Leeds, are published in the journal Nature.

Over recent decades the remaining Amazon forest has acted as a vast 'carbon sink' -- absorbing more carbon from the atmosphere than it releases -- helping to put a brake on the rate of climate change. But this new analysis of forest dynamics shows a huge surge in the rate of trees dying across the Amazon.
Lead author Dr Roel Brienen, from the School of Geography at the University of Leeds, said: "Tree mortality rates have increased by more than a third since the mid-1980s, and this is affecting the Amazon's capacity to store carbon."

Initially, an increase in carbon dioxide in the atmosphere -- a key ingredient for photosynthesis -- led to a growth spurt for the Amazon's trees, the researchers say. But the extra carbon appears to have had unexpected consequences.
Study co-author Professor Oliver Phillips, also from the University's School of Geography, said: "With time, the growth stimulation feeds through the system, causing trees to live faster, and so die younger."

Recent droughts and unusually high temperatures in the Amazon may also be playing a role. Although the study finds that tree mortality increases began well before an intense drought in 2005, it also shows that drought has killed millions of additional trees.

Dr Brienen said: "Regardless of the causes behind the increase in tree mortality, this study shows that predictions of a continuing increase of carbon storage in tropical forests may be too optimistic.

"Climate change models that include vegetation responses assume that as long as carbon dioxide levels keep increasing, then the Amazon will continue to accumulate carbon. Our study shows that this may not be the case and that tree mortality processes are critical in this system."

The study involved almost 100 scientists, many working for decades across eight countries in South America. The work was coordinated by RAINFOR, a unique research network dedicated to monitoring the Amazonian forests.

To calculate changes in carbon storage they examined 321 forest plots across the Amazon's six million square kilometres, identified and measured 200,000 trees, and recorded tree deaths as well as growth and new trees since the 1980s.

"All across the world even intact forests are changing," added Professor Phillips.

"Forests are doing us a huge favour, but we can't rely on them to solve the carbon problem. Instead, deeper cuts in emissions will be required to stabilise our climate."
Story Source:
The above story is based on materials provided by University of Leeds. Note: Materials may be edited for content and length.
Journal Reference:


Someone is playing catch-up. This was identified by Guy McPherson as a positive feedback about 2 years ago.

Region set to outstrip US as CO2 emitter"A widespread drought in the Amazon rainforest last year caused the "lungs of the world" to produce more carbon dioxide than they absorbed, potentially leading to a dangerous acceleration of global warming. Scientists have calculated that the 2010 drought was more intense than the "one-in-100-year" drought of 2005.

"They are predicting it will result in some eight billion tonnes of carbon dioxide being expelled from the Amazon rainforest, which is more than the total annual carbon emissions of the United States. For the second time in less than a decade, the earth's greatest rainforest released more carbon dioxide than it absorbed because many of its trees dried out and died.
Posted by seemorerocks at 12:36