US troops parade in Narva close to Russian border

This is highly provocative to say the east.. In 1989 an agreement between Gorbachev and western leaders stated that in return for allowing the reunification of Germany NATO would not move "a single inch" to the East.

Now 25 years later US troops are taking part in a parade in Narva, Estonia (which has a majority Russian population) right next to the border with the Russian federation. (In 1979 I visited the neigbouring Ust'-Narva by bus from Leningrad).

Whatever the history (and the three Baltic republics were populated by Russians during Soviet times) there is a preference for a connection to their association with nazism than with anything Soviet.

The Baltics and Ukraine are special in their history in that they were the only areas where the local population not only co-operated with the nazis but participated in the massacre of Jews.

The Ukrainian language laws that banned Russian (and so offended people living in the east and south of the country), found their antecedent in laws in Estonia banning the use of the Russian language

Estonia shows off NATO ties at celebrations on Russian border 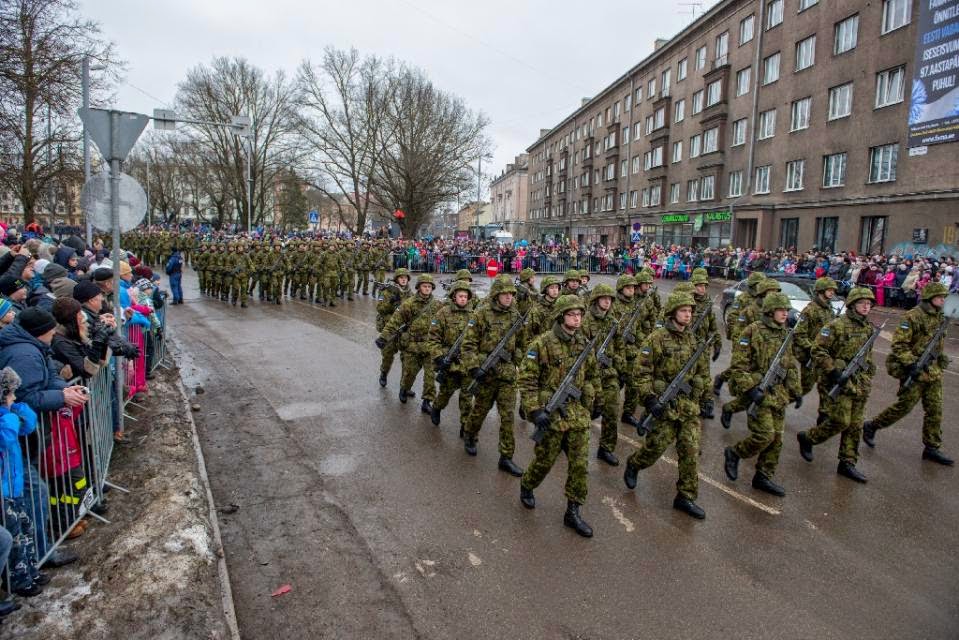 Narva (Estonia) (AFP) - Estonia marked its independence day Tuesday with a military parade featuring NATO hardware and troops on its eastern border with Russia amid heightened east-west tensions over Ukraine.

Around 100 British, Dutch, Spanish, Latvian and Lithuanian troops marched in the snow alongside some 1,300 Estonian soldiers to mark the independence of the formerly Soviet-ruled republic, now a member of the European Union and NATO.

"History has taught us that if we do not defend ourselves, nobody else will," General Riho Teras, Estonia's chief of staff, said at the parade.

"The events in Ukraine that have kept the entire world awake, demonstrate very clearly that we ourselves must maintain security," he added.

Two US Stryker armoured personnel carriers and a number of Dutch CV90 tanks were also on parade, equipment NATO has brought into the Baltics for a wave of exercises on the heels of Russia's 2014 annexation of Ukraine's Crimean peninsula and subsequent meddling in that country's east.

The annual parade has taken on particular importance this year in the context of jitters in the Baltic countries.

Holding the parade in Narva on the Russian border, where a majority of residents are ethnic Russian, was seen by commentators as sending a strong signal to Moscow about NATO's committment to collective defence.

General Adrian Bradshaw, NATO's Deputy Supreme Allied Commander Europe, said last week that Russia could try to seize territory from the alliance's states off the back of fighting in Ukraine.

However, few ethnic-Russian Narva locals who came to the parade seemed to echo fears of a Russian intervention.

"In my opinion national security is blown up by the press, it's nothing serious, everything is okay, no one is going to attack anyone," said 55-year-old Yuri Melnikov.

Elvira Neimann, 77, said she's been living in Narva since the end of the Second World War in 1945: "I feel part of Estonia, not Russia."

"We're all tolerant people, Russia is our friendly neighbour," she told AFP.

Lithuania said Tuesday it would return to limited conscription later this year as concern mounts over Russian military exercises near NATO Baltic states.

The Soviet Union annexed the three small states during World War II. They won independence in 1991 and have had rocky ties with Moscow ever since.