Something untoward at Fukushima Daiichi

I was first alerted to the fact that something untoward is happening at Fukshima Daiichi when  I saw reports, first from Zero Hedge and then by RT (repeated by the ABC, which, unlike our totally useless NZ media, does a good job on this).

Then I saw this monologue by Kevin Blanch


Whatever you think about Kevin (and I like him), he is right about three things that he points out in his video

1. There is absolute censorship in Japan where people can go to jail for speaking out
2. There is a no-fly one over Fukushima
3. The ABC was taken into Fukushima recently (see below), and were told that Tepco cannot get anywhere even close to the reactors (and they don't know where they are)

Someone has taken a time-lapse photo and I am told that this means there is a fire at reactor #3.  I have NO technical knowledge to tell me whether this is likely to be the case or not.


However, whatever the truth there is something extremely serious going  on at Fukushima and the only people capable of ignoring it in my mind are the same cretins that deny abrupt climate change and the other factors that are sending this species to oblivion in short order.

Here are some of the reports

AFP, Feb 22, 2015 (emphasis added): Sensors at the Fukushima nuclear plant have detected afresh leak of highly radioactive water into the sea… [with] contamination levels up to 70 times greater than the already-high radioactive status seen at the plant… TEPCO said itsemergency inspections of tanks storing nuclear waste water did not find any additional abnormalities… It was not immediately clear what caused the original spike… “With emergency surveys of the plant and monitoring of other sensors, we have no reason to believe tanks storing radioactive waste water have leaked… We are currently monitoring the sensors”…  The latest incident, one of several that have plagued the plant in recent months, reflects the difficulty in controlling and decommissioning the plant… TEPCO has not been able to effectively deal with an increasing amount of contaminated water…

NHK, Feb 22, 2015: Fukushima radioactive contamination sets off alarm — [TEPCO] says it has detected high levels of radioactive substances in a drainage channel on the plant’s premises on Sunday… the plant’s alarm system went off around 10 AM… levels of beta-ray emitting substances, which are not detected under normal circumstances, had risen to up to 7,230 Becquerels per liter… The utility suspects that contaminated water in the channel may have leaked into the port.

Japan Times, Feb 22, 2015: Strontium-90 levels spike alarmingly at Fukushima No. 1 plant — The Nuclear Regulation Authority said Sunday that an alarm went off at the Fukushima No. 1 nuclear plant signaling high radioactivity levels in drainage ditches… the first alarm sounded at around 10 a.m., and another alarm 10 minutes later indicated much higher levels. Officials said contaminated water may have been discharged into the ditches.

It has been a disturbing week for Japan, not due to any recent economic calamity resulting from Abenomics, but because for the first time since the catastrophic 2011 earthquake, the nation has been rocked with a series of ever stronger tremors, with two 6.0+ stronger quakes recorded in just the past 2 days:

The quakes come at an awkward time, just a few short months before Japan's government aims to restart its first nuclear reactor by around June, following the Fukushima devastation.

While it is unclear if it is directly related to the recent surge in tectonic activity, overnight another radioactive water leak in the sea was detected at the crippled Fukushima nuclear plant, the facility’s operator TEPCO announced.
Contamination levels in the gutter reportedly spiked up 70 times over regular readings.

The levels of contamination were between 50 and 70 times higher than Fukushima’s already elevated radioactive status, and were detected at about 10 am local time (1.00 am GMT), AFP reported. After the discovery, the gutter was blocked to prevent leaks to the Pacific Ocean.

As RT adds, throughout Sunday, contamination levels fell, but still measured 10 to 20 times more than prior to the leak. "We are currently monitoring the sensors at the gutter and seeing the trend," a company spokesman said.

He did not specify the cause of the leak.

Tepco being Tepco, it decided to be extra generous with the lives and safety of any citizens around the blast site, and in yet another attempt to avoid panic, reported the latest batch of radioactive propaganda:

No contaminated water leakage has been confirmed at Fukushima Daiichi NPS; however,radioactive data has temporary risen at the drainage.
There was one problem what that euphemism:

What @TEPCO_English tweets on #Fukushima-1 did not say is sensors detected levels 50 to 70x > already-high radioactive level there. #nuclear
The euphemisms continue: "It has proved difficult for TEPCO to deal with plant decommissioning. Postponed deadlines and alarming incidents occur regularly at the facility. Earlier this week, the UN nuclear watchdog (IAEA) said Japan had made significant progress, but there is still a radioactive threat, and a “very complex” scenario at Fukushima."

So while Tepco not only has no idea how to proceed with the toxic cleanup at the Fukushima site 4 years after the explosion having scrapped its idiotic "ice sarcophagus" idea a year ago, and continues to scramble to push the illusion that it is on top of the situation - one which any earthquake threatens to unravel with devastating results - Japan is already preparing for its next epic catastrophe, when it proceeds to launch even more nuclear power plants in the coming months. Then again, once Japan suffers the next and final Fukushima-type event and the endgame for doomed nation arrives, at least the government can "blame nature" for finally destroying the country, deflecting attention from years and decades of failed economic policies.

Another radioactive water leak in the sea has been detected at the crippled Fukushima nuclear plant, the facility’s operator TEPCO announced. Contamination levels in the gutter reportedly spiked up 70 times over regular readings.

The sensors are connected to the gutter that pours rain and ground water from the plant to a bay adjacent to the facility.

The levels of contamination were between 50 and 70 times higher than Fukushima’s already elevated radioactive status, and were detected at about 10 am local time (1.00 am GMT), AFP reported.

After the discovery, the gutter was blocked to prevent leaks to the Pacific Ocean.

Throughout Sunday, contamination levels fell, but still measured 10 to 20 times more than prior to the leak.

"We are currently monitoring the sensors at the gutter and seeing the trend," a company spokesman said.

He did not specify the cause of the leak.

It has proved difficult for TEPCO to deal with plant decommissioning. Postponed deadlines and alarming incidents occur regularly at the facility.

Earlier this week, the UN nuclear watchdog (IAEA) said Japan had made significant progress, but there is still a radioactive threat, and a “very complex” scenario at Fukushima.

About a month ago, TEPCO announced it would miss their toxic water cleanup deadline, suspending it until the end of May, after earlier pledges it would be done by March. 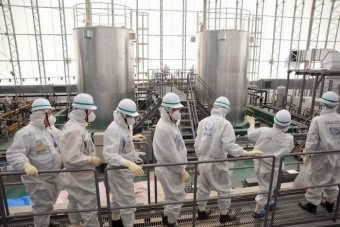 This is the excellent ABC documentary which goes inside the units at Fukushima and points out that they are being closely controlled by the Japanese as to what they can see, but still come away with the truth that Tepco can't get anywhere near the reactors

Almost four years after the Fukushima disaster, Japan is about to restart its nuclear industry.

The 2011 meltdowns at the tsunami-hit plant prompted a shutdown of all Japan's nuclear power stations and saw the power station's operator TEPCO accused of cover-ups and gross negligence.

TEPCO says radiation levels at Fukushima have significantly decreased and major steps have been taken to decommission the molten reactors.

Others say the plant cannot be fixed and thousands of people will never be allowed to return to their homes because of high radiation.

With vacuum-sealed protection gear and special breathing apparatus, TEPCO gave the ABC an exclusive tour of the crippled plant.

TEPCO was keen to show the progress that had been made, first with a visit to reactor 4.

Inside, empty pools could be seen where nuclear fuel rods once were.

Reactor 4 was offline when the tsunami hit, but a powerful hydrogen explosion left the rods in a precarious situation.

Now they have been moved to a secure location.

TEPCO guide Kenichiro Matsui said the project took about a year to complete.

"On one side is the reactor and [on the] other is the pool where we removed 1,500 spent fuel assemblies," he said.

"It finished last December and was a success."

Entry to closed areas would lead to instant death

Reactors 1, 2 and 3 were strictly off limits, and looking from about 500 metres away the area was clearly deserted, with cars and equipment abandoned.

Removing the molten fuel from these reactors will be an enormous challenge as workers cannot enter because it would lead to instant death.

Mr Matsui admitted they did not know the extent of the problems.

"We do not know [the] exact situation in detail," he said.

"Fuel has been melted down but nobody has seen it ... We need to develop robotic technology with help from around the world to know the real situation."

The only way TEPCO can control the meltdowns in 1, 2 and 3 is to pump water in to cool them, but the water becomes highly radioactive and mixes with the massive amount of groundwater that flows into the reactors from the surrounding hills.

This is TEPCO's most urgent problem - every day it has to deal with more than 500,000 litres of radioactive water.

Standing in a high position, the whole 3.5-kilometre site could be seen filling up with massive storage tanks.

The looming crisis is lack of space and where to put the water, and TEPCO is scrambling for solutions.

Officials want to build an ice wall around the crippled reactors to stop the groundwater entering, but that is untested technology.

During the visit radiation levels were recorded of 40 microsieverts per hour and more - about 1,000 times the rate of Tokyo.

"We can get rid of 62 kinds nuclear substances and can make it to safe levels so only tritium remains," he said.

But it cannot cope with the sheer volume of water and technical problems have meant TEPCO has had to employ three different systems, and it still missing projected deadlines.

Ultimately TEPCO will probably have to release the water into the sea, and the company has been given the all clear by Japan's nuclear authority to discharge decontaminated water.

This is making many people very nervous.

Fourth-generation fisherman Hisashi Yoshida said any trust with TEPCO was broken a long time ago.

"The fishermen attended meetings but don't believe what TEPCO says," he said.

"Although they said it was treated and OK, we regard it as contaminated."

Four years after the disaster, 120,000 people are still living in temporary accommodation, unable to return to their homes around the plant.

"We escaped with nothing but the clothes on our backs and I know we won't be going home," said Shinichi Kumadah, a Fukushima evacuee.

"When I think of the future I can't think of anything. It's hopeless."

Finally, this is an accurate assessment of the situation humanity faces from radiation from just one major nuclear accident.

The only thing I would take issue with is the contention that making comments on the White House You Tube site is going to make any difference at all.

But we all do what we can