(Northern edge of Larsen C Ice Shelf is at significant risk of breaking off as a massive rift continues to open within it. The above image shows the rate of rift propagation since November of 2010. Image source: Cryosphere Discussions.)
There’s a 30 kilometer long and hundreds foot deep crack running through West Antarctica’s massive Larsen C ice shelf.

It’s a rift that now stretches from the Weddell Sea — where winds and currents have driven human-warmed ocean waters to up-well along the ocean-contacting faces of the great Antarctic ice sheets — and deep into the interior of this 49,000 square kilometer and 600 to 700 foot tall block of ancient, floating ice.

Over the past few years this rift has been rapidly advancing at a rate of about 2.5 kilometers each year. Given that the rift has already traversed more than half of the Larsen C ice shelf calving face, a very large break-up could now occur at almost any time.

This evolving situation now threatens to destabilize the entire Larsen C ice shelf — resulting in major losses to a very large block of ice that has been a permanent feature of the Antarctic coastline since at least the last interglacial period 150,000 years ago. Such rapidly evolving risk was the subject of a February 5 communication by a group of glaciologists warning that “significant threats” to “Larsen C ice sheet stability” now existed.

In a change from the usual pattern, a northwards-propagating rift from Gipps Ice Rise has recently penetrated through the suture zone and is now more than halfway towards calving off a large section of the ice shelf (Figs. 1 and 2). The rate of propagation of this rift accelerated during 2014. When the next major calving event occurs, the Larsen C Ice Shelf is likely to lose around 10 % of its area to reach a new minimum both in terms of direct observations, and possibly since the last interglacial period (Hodgson et al.2006)

Large ice shelf break-ups have been occurring along the Antarctic Peninsula since the 1970s. As human warming advanced and the heat sink of the southern Ocean increased bottom water temperatures along the Antarctic perimeter, many of the far northern ice shelves and an increasing number of ice bodies closer to the Antarctic interior have lost significant portions of their mass.

Now, Larsen C is at risk of an even worse break-up. For the predicted 10% loss to Larsen C would equate to about 5,000 square kilometers — or an area roughly the size of Connecticut — floating off into the Southern Ocean: 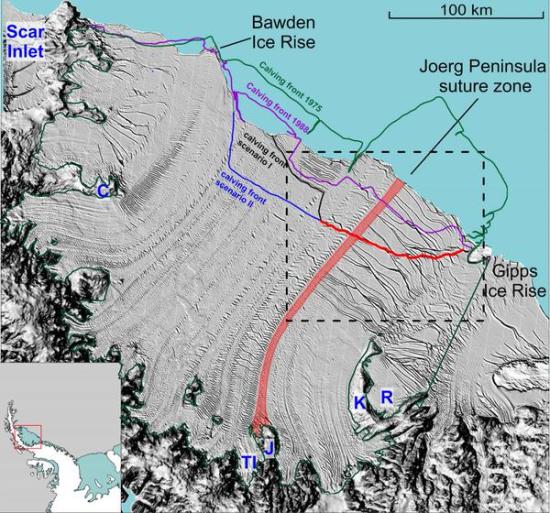 (Larsen C Ice Shelf map with the new rift indicated in red and the potential calving face outlined in blue. Note the previous calving fronts in 1975 and 1988. Image source:Cryosphere Discussions)
It would be yet one more major ice loss for the region, and perhaps a new record loss for an area that has frequently seen Rhode Island sized chunks of ice (around 1,000 square kilometers) break off into the warming world’s seas.
The report goes into further detail about the importance and vulnerability of Larsen C, stating:

As mentioned above, during recent years we have seen numerous ice shelves and ice sheets begin to destabilize. In addition, two ice shelves — Larsen A and Larsen B have already completely disintegrated due to human-caused warming.
Larsen C may be most immediately at risk, but the leading edges of the Ronne-Filchner Ice Shelf, The Pine Island Glacier, The Ross Ice Shelf, and the Amery glacier have all shown rapid seaward acceleration. Further, various studies of these increasingly vulnerable ice shelves have shown substantial basal melt coincident with a floating of the ice sheets off grounding lines, leading to a retreat of the anchor points landward.

Sea-facing ice sheets and ice shelves serve to anchor the great interior glaciers of Antarctica. Loss or destabilization of these anchors would result in more and more rapid flow of land ice into the Southern Ocean. It is for this reason that the destabilization and shattering of ice shelves like Larsen C can have serious implications for the rate of sea level rise over the coming decades.

Overall, nearly 200 feet worth of sea level rise is locked in Antarctica’s glaciers and we are, through a heating of the world’s oceans, ice, and atmosphere, pushing these glaciers to melt and move in an ever-more dramatic and world-altering fashion.