The DPR militias liberated all populated areas which are situated around the so-called “Debaltsevo cauldron”, the representative of the DPR Ministry of Defence stated.

Now the local resididents are no longer in danger and the militias told how they were welcomed in the liberated villages.

The locals told militiamen about binge drinking in the ranks of the punitive batallions,and a boorish attitude towards the population. According to one of the men in the village, Ozervernovoka,near Gorlovka, which was liberated from the Ukrainian army a few months ago the soldiers poured petrol down the wells. Since there is no central water supply the villagers have no supply of water

Ukraine’s Laughter and Horror: A fight for sunflower oil. A fight over TB medication.

Ukrainian patriots staged a battle over sunflower oil for sale. A bottle of oil selling for 15 hryvnya was sufficient reason for cultured “Europeans” to stage a riot. Funny, right? Whatever happened to the heavily advertised “culture” of Galicia?

President Petro Poroshenko spoke at the ceremony to mark those killed in the events of 20 Febraury, 2014, on Maidan. Participants cried out “Gan’ba!” - «Гоньба»-  (“Shame!)

Ukrainian-Polish-Lithuanian Brigade to Become Operational in 2015 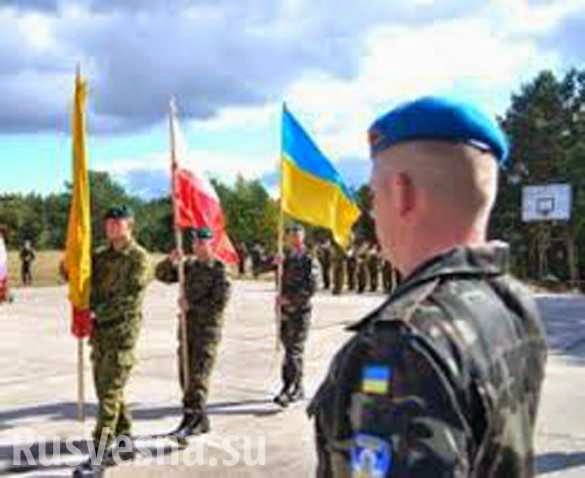 Poroshenko creates the Ukrainian-Polish-Lithuanian militarybrigade. Its command to be located in Poland.

Petro Poroshenko signed the law ratifying the agreement with Lithuania and Poland on the creation of a joint military unit.

“The brigade is being formed in order to participate in international operations on the basis of a UNSC mandate and decisions by the appropriate government agencies of Lithuania, Poland, and Ukraine. The agreement is open to other countries upon their invitation by the three signatories,” the announcement states.

The president’s press service notes that the structure, manning, weapons, and equipment or other aspects of its activities will be regulated by a separate technical agreement between security institutions of the respective countries.

The brigade’s HQ will be located in the Polish city of Lublin. The HQ will operate in accordance with Polish law and relevant components of international law.

Each of the signatories is responsible for the financial support of its units included in the brigade during joint training exercises and operations.

The agreement was signed by Ukraine, Poland, and Lithuania in Warsaw on September 19, 2014 and was ratified by the Verkhovna Rada on February 4, 2015.

Defense Minister Poltorak announced earlier that the brigade should become fully operational in the first half of 2015. He estimates that the first group of Ukrainian military personnel will arrive in Lublin in the second quarter of 2015.

Poltorak also said that the number of Ukrainian soldiers included in the brigade will be determined during the working group meetings, and the troops will be subject to rotation.

It sounds something like “fascists of all countries unite.” They have united before, and have come to Russia before, but we also know how these marches had ended. If someone has a short memory, too bad for them.

J.Hawk’s Comment: This announcement, coming very shortly after Poroshenko's call for peacekeepers, makes one wonder whether this is how he intends to deal with the Donbass problem, namely by handing over the fighting to Poles and Lithuanians. Because once Poles and Lithuanians start dying, the rest of NATO might be drawn into the conflict. This is a rather artful way of overcoming the inevitable French and German objections to a NATO-led peacekeeping force being sent to Ukraine. This is a trilateral agreement that does not involve Germany or France, therefore they have no official say about it. But once this unit is deployed anywhere, it will quickly become a NATO mission simply because these are NATO countries. There can be absolutely no doubt that Poroshenko wants to continue the war until victory or Doomsday.

However, what is the likelihood if the brigade being deployed? There are many obstacles to the implementation of the plan. The brigade is unworkable, period, and it will not be a militarily effective formation. For starters, Lithuania and Poland are NATO countries whose militaries have been under NATO standards for years. Just to illustrate the level of difficulty here, Polish and Lithuanian soldiers use 5.56mm rifles (Kalashnikov clones, to be sure), while Ukraine uses actual 5.45mm AK-74s. Similar problems exist in all areas of interoperability.

But the real problem is political in nature. Poland and Ukraine (though probably not Lithuania, but we’ll never know) both pretend to be the regional leaders. Poland will treat its former colonies as if they were younger brothers in need of tutelage by their world-wise (and Iraq/Afghanistan experienced) older brother, while Ukraine will naturally feel that since it bore the entire burden of defending Civilization from Russian aggression, it should be in the driver’s seat. It’s unlikely that the shared Russophobia of the three partners is sufficient to overcome their mutual suspicions and megalomania. The Poles' hatred of Nazis and Banderites might even prove stronger than Russophobia, for what will happen should one of the units rotating to Lublin be one of the ones which treat Stepan Bandera as their patron saint?

Ukraine, Poland and Lithuania are set to create a joint military brigade to conduct military operations around Europe. 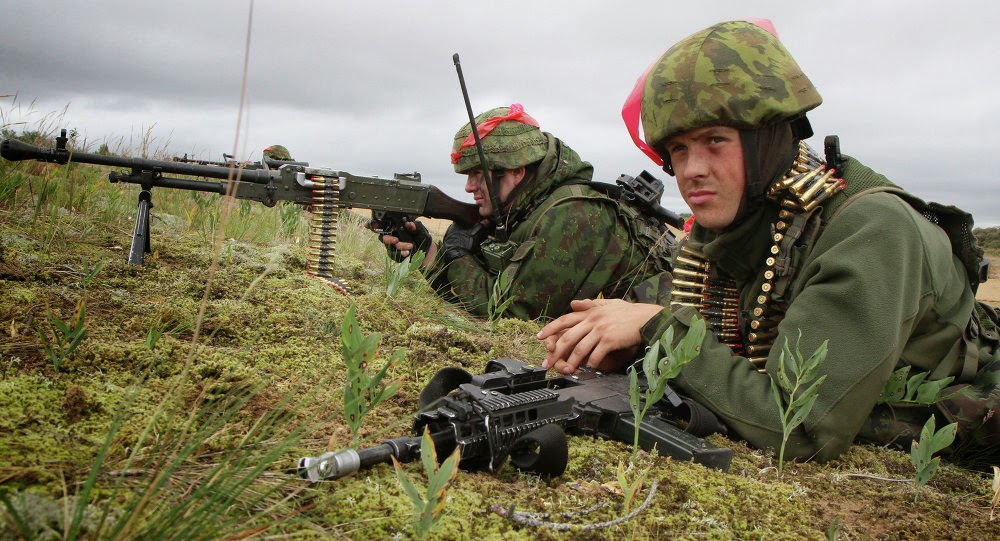 Ukraine Ratifies Agreement on Joint Military Brigade With Poland, Lithuania
“The brigade is created for the purpose of participation in international operations carried out on the basis of the UN Security Council mandate and authorized bodies of Lithuania, Poland and Ukraine. The agreement is open for other countries to join based on the invitation from members of the brigade,” the document says.

The idea to create the international brigade goes back to 2009, when defense ministers of Lithuania, Poland and Ukraine came up with a document outlining the need to create a joint military unit. Last September, the three countries signed an agreement to establish the LITPOLUKRBRIG, the military brigade that would be used in international military operations around Europe to maintain peace and strengthen military cooperation in the region.

Ukraine is expected to provide the joint brigade with 545 soldiers, as stated by Deputy Defense Minister Petro Mekhed. Poland and Lithuania will send 3500 and 350 soldiers, respectively. The brigade's headquarters will be located in Lublin, Poland. 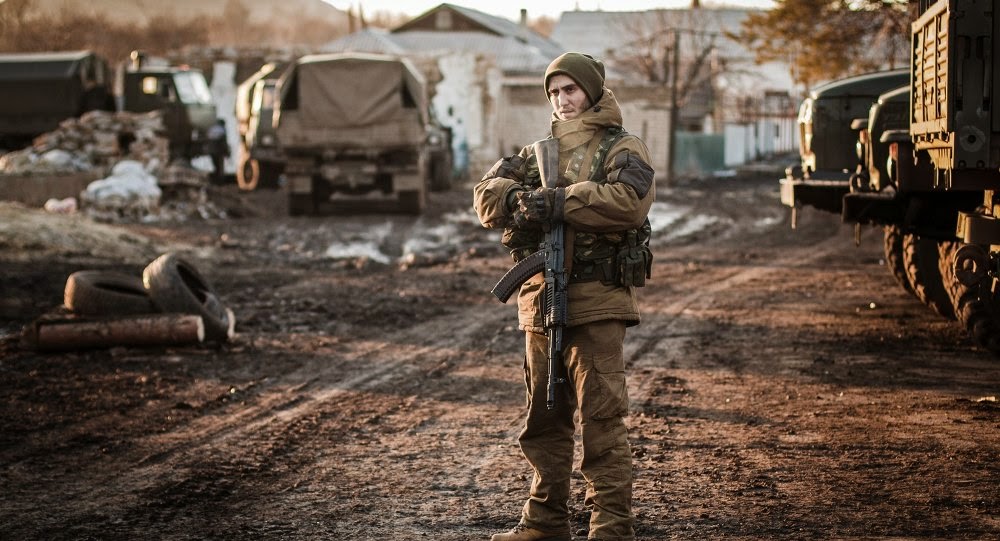 The debacle of the Ukrainian army in Debaltseve is a tragedy obscured by face.

Control of Debaltseve was important to the east Ukrainian militia. As a key railway junction it interfered with communications between the two rebel republics of Donetsk and Luhansk. It was also an obvious launch pad for a new government offensive aimed at cutting the militia controlled areas off from each other.

It is impossible to see how Debalsteve was comparably important to the Ukrainian government. The very things that made Debaltseve important to the militia guaranteed that in the event of renewed fighting the militia would aim to capture it. A glance at the map shows why in that event, given the balance of forces, it was indefensible.

So it proved. By Monday 9th February 2015, even Western journalists were admitting the militia had encircled Debaltseve and the Ukrainian troops there were cut off. The Ukrainian government however denied it.

The denial reached farcical levels during the negotiations in Minsk. Half the 16 hours of negotiations were reportedly taken up with attempts to get Ukraine’s President Poroshenko to admit the obvious, that his troops in Debaltseve were encircled. Ukrainian President Petro Poroshenko refused to do so, refusing to order his troops to retreat and rejecting all offers from others to arrange this.

There is no logic behind this denial of reality. No military objective was achieved by continuing to defend Debaltseve when its capture by the militia was just days away. As commander in chief President Poroshenko owed it to his men to agree the terms of their withdrawal when it was clear their further sacrifice was in van.

At an earlier stage in the war militia commander Strelkov withdrew his men from Slaviansk when it had become clear Slaviansk was undefendable and that no purpose was served sacrificing the lives of his men defending it. That is the basic duty owed by every commander to his men.

President Poroshenko failed in that duty.

The result is scores of Ukrainian soldiers (thousands by some counts) who might be alive are now dead.

Some of the blame must lie with German Chancellor Merkel and French President Hollande. A report published by Der Spiegel confirms that they launched their peace initiative in part in order to save the lives of the Ukrainian soldiers trapped in Debaltseve. Given that this was so, they owed it to these trapped men to make President Poroshenko face reality and see sense.

When he threatened to storm out of the meeting they should have called his bluff by warning him that if he did so they would put the blame for the failure of the talks on him. Had they done so, it is likely he would have come round.

The main responsibility for the debacle must however lie with President Poroshenko. Not only did his refusal to face reality doom many of his soldiers to certain death but ludicrously, following the disaster, he has declared victory, claiming his soldiers’ sacrifice was necessary to “prove” to the Western Powers the Russian military’s involvement in the war.

This is preposterous. Not only does the disaster do no such thing. What Poroshenko was “proving” is no more than what the Western powers have always been saying. He did not need to sacrifice his soldiers to “prove” it to them.

In reality President Poroshenko sacrificed his men because he did not want to incur the wrath of the war party in Kiev by ordering their retreat.

When a commander sacrifices his men for such a reason he has failed in his duty and it is time for him to go.