Canada Considers Sending Troops to Ukraine
As the United States and Britain prepare to send advisors to support the Ukrainian military, Canada seriously considers doing the same. But many Canadian lawmakers are leery of becoming further involved in a conflict half-way around the world. 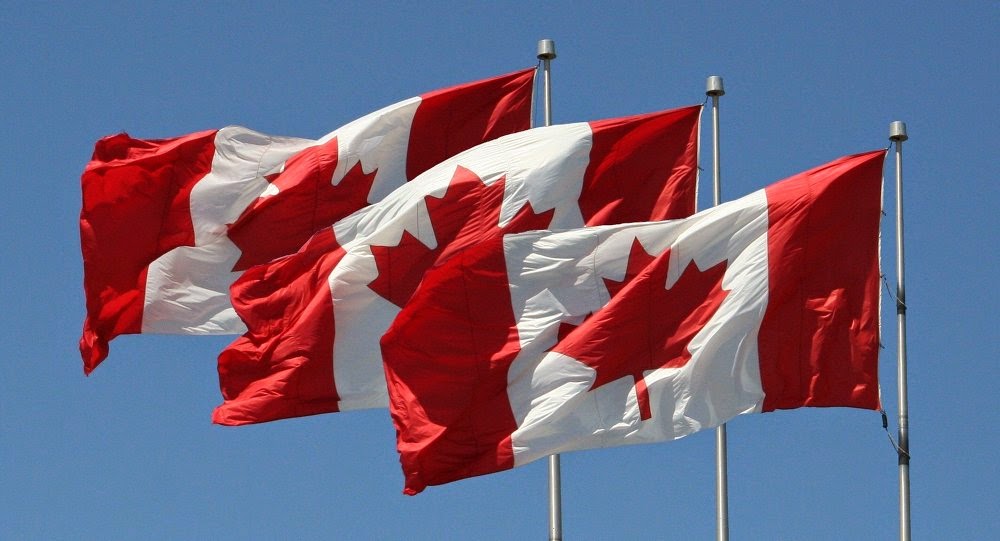 “That’s the kind of technical training that we can offer,” he said, according to the Canadian Press. “We are in discussions and looking at options, and we’re open to – as I’ve been saying for two weeks now – open to participating in training missions.”

He did not rule out the possibility of Canadian advisors also taking part in combat training.

Canada has already provided Ukrainian soldiers with two shipments of non-lethal military gear. They have also provided satellite images which track pro-independence militias’ movement in the east of the country. Any action beyond that must first be approved by the House of Commons.

“If we are going to work towards anything different than what we’re doing now, which is non-kinetic flak jackets…we could send night vision goggles. That’s been agreed to and we’re on board with that,” Kenney said. “Anything beyond that requires two things. One, concerted NATO action. Two, a decision by the Parliament of Canada.”

Kenney insists that the proposal would only be an extension of Canadian NATO commitments.

“We’ll be doing more later this year in NATO exercises, all of which is designed to send a message to Russia that Canada, together with our NATO allies, stands with our eastern European friends against any intimidation or territorial aggression on the part of Vladimir Putin,” he said.

Troops from Poland march during an exercise in Bemowo Piskie near Orzysz, in northeastern Poland. File photo

Russia, of course, categorically denies its involvement in the conflict.
Still, many express concerns with escalating Canadian involvement in the conflict.
“Unless there’s a prospect for years of war, and I don’t think there is, it’s already very late in the game to be reinforcing Kiev’s ragtag forces,” former Canadian ambassador to Russia. Chris Westdal, told CBC News.

Lawmakers may also be hesitant to send advisors after an incident last month, in which Canadian military advisors fired back at self-proclaimed Islamic State militants in northern Iraq.

“I asked the prime minister straight up in September whether this was a combat mission, whether Canadian troops would be involved in combat. I got a categorical answer, and the answer was no,” New Democratic Party leader Tom Mulcair told reporters, accusing Harper of misleading Parliament about his administration’s intentions.

If a similar incident occurred in Ukraine, it could escalate tensions and draw Canada into the conflict even further.

Leader of the Liberal opposition, Justin Trudeau, also wants more details about the government’s plan before signing off on training missions.

On Wednesday, the British government announced it would send 75 military advisors to Ukraine next month. This follows a decision by the US to send 800 troops to train soldiers in western Ukraine

What’s the Catch? Poland Gets ‘Free’ US Armored Military Vehicles

Ukraine military has begun heavy weapons withdrawal – military spokesman
Kiev troops have started the long-promised withdrawal of heavy weapons from eastern Ukraine, a step required by the fragile ceasefire agreement signed earlier this month. The rebels have been criticizing their opponents for stalling the disengagement. 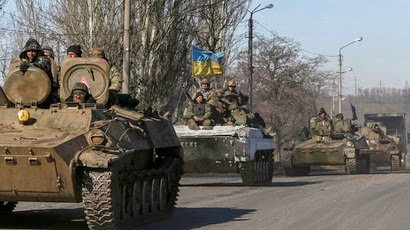 “In accordance with the agreement reached in Minsk on February 12, today Ukraine begins withdrawal of 100mm artillery from the disengagement line. It's the first step towards withdrawal of heavy weapons, which will only be carried out under OSCE monitoring and verification,” the Ukrainian Defense Ministry said in a statement.

The movement of artillery pieces is already underway and should take about a day, a Ukrainian military spokesperson said. The hardware will be pulled back 25km from the disengagement line.

​Kiev's West-backed 'ludicrous demands' may derail ceasefire – Moscow
The order to withdraw heavy weapons was given on Thursday after the Ukrainian military confirmed that they had not been shot at for a day. No combat casualties have been reported for a second day in a row.

“If there are any attempts to launch an offensive, the withdrawal schedule will be changed. The Ukrainian troops are fully prepared to defend the country,” the statement added.

Meanwhile rebel forces are continuing to pull back their heavy weapons, as they have been doing for days.

“Today at 10am, an OSCE-monitored movement of our columns commenced. They recorded this movement,” rebel spokesman Eduard Basurin said.

The self-proclaimed Donetsk People's Republic (DPR) said it wants to withdraw 180 artillery pieces and 17 rocket launchers on Thursday. Previously it withdrew 400 artillery pieces, including some 320 captured from the Ukrainian troops after their retreat from Debaltsevo.

The rebels have already withdrawn 90 percent of heavy weaponry from the disengagement line, their leader, Aleksandr Zakharchenko, said Thursday.

The rebels voiced concerns over lack of similar moves by Kiev, suspecting it of foul play. Kiev insisted that it would keep its weapons in their positions until at least two days are spent without a single shot.

Under the Minsk agreement both sides must pull their heavy weapons back from the disengagement line to form a buffer zone of 50 to 140km, depending on the type of weapon. The process is expected to be complete by March 1. OSCE is tasked with verifying the withdrawal.

Alexander Hug, deputy chief monitor of the OSCE special monitoring mission to Ukraine, told RT on Thursday that both sides of the Ukrainian conflict are finally withdrawing their heavy weaponry from the frontline, stressing the move is “something that they have not done before.”

“We see now mutual actions towards compliance within the Minsk arrangements. The OSCE special monitoring mission knows that both sides have announced that they will be moving hardware away from the frontline,” Hug said. “This afternoon, the government of Ukraine has done that as well. We welcome this mutual step now from both sides to start working towards utterance to their commitments.”

In this brief interview, I speak optimistically about the Ceasefire, explaining that the break-away republics of Donetsk and Lugansk need this peace to rebuild critical infrastructure, and try to bring back some semblance of normalcy back to the lives of the people.

I also express concern that Ukraine will treat this ceasefire as something else, which in violation of international law, would be simply to rearm and resupply. The definition of a ceasefire is those things which are meant to permanently end the hostilities.

Poroshenko has already stated last week that he will use this ceasefire in order to re-arm and re-supply. Naturally part of this is theatrics meant to shore up his dwindling base of support. But it also reflects an expectation upon him which his US handlers have.

Ukraine Prepares for an Attack Against Russia

By: Eric Zuesse
The post-coup leaders of Ukraine have routinely said that Ukraine should destroy Russia; and, now, starting on February 24th, they are placing into position the key prerequisite for doing so, which is the advanced Anti-Ballistic-Missile, or ABM, system, S-300, which is described as follows by wikipedia:
“The S-300 is regarded as one of the most potent anti-aircraft missile systems currently fielded.[3] Its radars have the ability to simultaneously track up to 100 targets while engaging up to 12/24/36 targets. The S-300 deployment time is five minutes.[3] The S-300 missiles are sealed rounds and require no maintenance over their lifetime. An evolved version of the S-300 system is the S-400 (NATO reporting name SA-21 Growler), which entered limited service in 2004.” 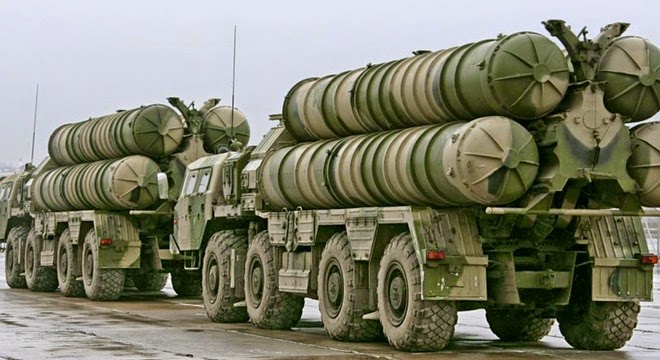 The S-300 (otherwise called “SAM C-300”) is designed to protect against retaliation. The entire purpose of ABMs is to disable retaliation. In that sense, ABMs are the most aggressive weapons of all. They are specifically designed to prevent retaliation from a nation that has been attacked and that is responding by sending in its own bombers to retaliate.
Here is one report, February 24th, of installation of these ABMs, from the region near Odessa, including a photo of these weapons on a truck:
http://trassae95.com/all/news/2015/02/24/ot-chetyreh-do-shesti-kompleksov-raket-s-300-proehali-po-odesse-foto-20927.html

Here is another such report, with videos of the missile-systems being put into place, during the 24th and 25th of February:
http://fortruss.blogspot.com/2015/02/ukrainian-army-deploys-s-300s-in-odessa.html
The likeliest explanation of this would be that the new (ever since the February 2014 coup) anti-Russian Ukrainian Government intends to bring NATO in to invade Russia and to do this by provoking a limited attack from Russia that will then be repelled by these S-300s. After surviving Russia’s response, NATO would then claim Ukraine must be defended from Russia’s aggression; and, then, NATO would take over the task of eliminating Russia — which the present leaders of Ukraine (and their followers) have been very clear that they want to happen.
Other reasons for Ukraine’s positioning these ABMs ready for launch wouldn’t make sense, because the missiles won’t be usable except to block retaliation.
These missiles are purely ‘defensive’ weapons; but the Ukrainian Government isn’t waiting for U.S. President Obama to approve supplying other ‘defensive’ weapons to Ukraine; they’re moving forward with what they’ve already got.
It should also be noted, however, that Russia had set up S-300s in Crimea immediately prior to the 16 March 2014 referendum in Crimea on whether Crimea should return to Russia (of which Crimea had been a part during 1783-1954), or whether it should instead be ruled by the newly installed Ukrainian Government in Kiev. Russia said that this was being done then in order to deter the Ukrainian Air Force from bombing Crimea during the referendum — a referendum that Ukraine was trying to prevent and was threatening to block. Ukraine today might similarly be able to say that their new ABM installations are being done in order to prevent an imminent Russian air invasion into Ukraine.
Whether any ABM-installation can be said to be authentically defensive is thus a judgment that only each individual will make, based on that person’s estimation of the realistic likelihood that the country setting it up is authentically under threat of invasion at that particular moment in time. ABMs are against retaliatory weapons, but when is a threat real, against which are needed ABMs so as to justify the installation of such anti-weapons? If the threat of weapons from the other side is not real, then the threat of the anti-weapons against them is very real: it is then clearly preparation for launching an aggressive attack.
Consequently, whether a ‘defensive weapon’ is actually the most aggressive type of weapon — the preliminary to launching an attack — depends upon whether it is the preliminary to launching an attack, and only each individual observer can judge that question. Ukraine says that the referendum in Crimea was itself an attack against Ukraine. However, Ukraine did not set up ABMs at that time. They now are. Do they really believe that Russia is about to invade Ukraine? They have been saying, since the coup, that Russia is invading. The U.S. Government and its allies have seconded those allegations. But not until now is Ukraine actually preparing for such an invasion from Russia — or else preparing for its allies to launch an invasion of Russia.
—————
Investigative historian Eric Zuesse is the author, most recently, of  They’re Not Even Close: The Democratic vs. Republican Economic Records, 1910-2010,  and of  CHRIST’S VENTRILOQUISTS: The Event that Created Christianity.
A strange logic from the British press. NATO demosntrating its wares 150 km from St Petersburg proves the Russians are about to invade the Baltics, right?

Russian and Nato troops took part in rival exercises on either side of the Estonian border on Wednesday, highlighting fears that the tiny Baltic state could be the next target of the Kremlin’s territorial ambitions.

Nato forces put on a show of strength within yards of Estonia’s Russian border, with armoured personnel carriers, tanks and 1,300 Estonian soldiers forming a military parade. [...]

The parade took place in the snow-bound Estonian frontier town of Narva, where a majority of residents are ethnic Russians. […]

The Kremlin responded with its own military drills, sending 2,000 paratroopers into Russia’s western Pskov region, which borders both Estonia and neighbouring Latvia.
Posted by seemorerocks at 17:24