Guy McPherson identied this and characterised it as a postive feedback AT LEAST 2 years ago.

Amazon rainforest losing ability to regulate climate, scientist warns
Report says logging and burning of Amazon might be connected to worsening droughts – such as the one plaguing São Paulo 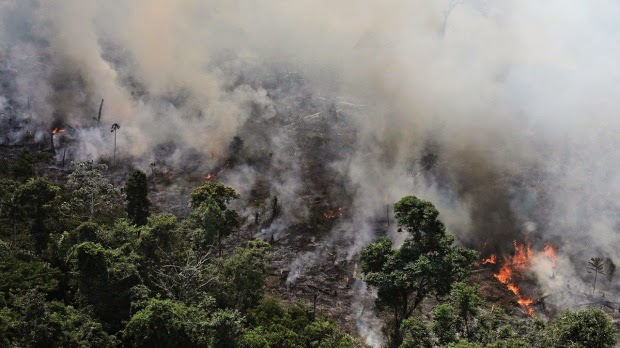 The Amazon rainforest has degraded to the point where it is losing its ability to benignly regulate weather systems, according to a stark new warning from one of Brazil’s leading scientists.

In a new report, Antonio Nobre, researcher in the government’s space institute, Earth System Science Centre, says the logging and burning of the world’s greatest forest might be connected to worsening droughts – such as the one currently plaguing São Paulo – and is likely to lead eventually to more extreme weather events.

The study, which is a summary drawing from more than 200 existing papers on Amazonian climate and forest science, is intended as a wake-up call.

“I realised the problem is much more serious than we realised, even in academia and the reason is that science has become so fragmented. Atmospheric scientists don’t look at forests as much as they should and vice versa,” said Nobre, who wrote the report for a lay audience. “It’s not written in academic language. I don’t need to preach to the converted. Our community is already very alarmed at what is going on.”

A draft seen by the Guardian warns that the “vegetation-climate equilibrium is teetering on the brink of the abyss.” If it tips, the Amazon will start to become a much drier savanna, which calamitous consequences.

The Amazon works as a giant pump, channeling moisture inland via aerial rivers and rainclouds that form over the forest more dramatically than over the sea, the author says. It also provides a buffer against extreme weather events, such as tornados and hurricanes.

In the past 20 years, the author notes that the Amazon has lost 763,000 sq km, an area the size of two Germanys. In addition another 1.2m sq km has been estimated as degraded by cutting below the canopy and fire.

As a result, the report notes, the deterioration of the rainforest – through logging, fires and land clearance – has resulted in a decrease in forest transpiration and a lengthening of dry seasons. This might be one of the factors of the severe drought affecting south-east Brazil. São Paulo – the biggest city in South America – is facing its worst water shortages in almost a century. October, which is usually the start of the rainy season, was drier than at any time since 1930, leaving the volume of the Cantareira reservoir system down to 5% of capacity.

“Studies more than 20 years ago predicted what is happening with lowering rainfall. Amazon deforestation is altering climate. It is no longer about models. It is about observation,” said Nobre. “The connection with the event in São Paulo is important because finally people are paying attention.”

Nobre calls for a “war effort” to reverse the damage and secure the global climate and security of future generations. This would involve a ramped-up effort to immediately halt existing deforestation and a major new project to replant trees.

Whether the government listens, however, is another matter. Forest clearance has accelerated under Brazil’s president, Dilma Rousseff, after efforts to protect the Amazon were weakened. Last month, satellite data indicated a 190% surge in deforestation in August and September. The influence of the “ruralista” agribusiness lobby in Congress has also grown in recent years, making it harder for the authorities to push through new legislation to demarcate reserves.

“They have taken good action in the past,” says Nobre. ““I hope they will listen now”.