A Wellington meeting on the TPPA - Wednesday March 4 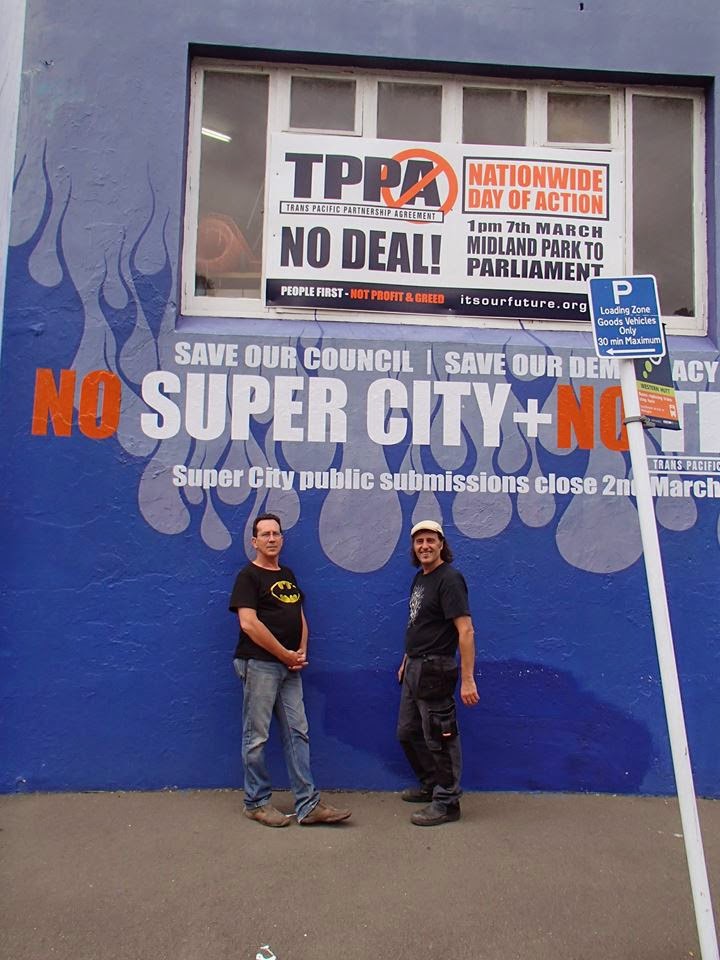 Prof Jane Kelsey - The TPPA End-game -
Wednesday March 4 Connolly Hall Wellington 5:30m
The TPPA is nearing crunch time and Professor Jane Kelsey will provide an update on Wednesday July 4th at 5:30pm at Connolly Hall. All welcome. If you would like to attend, please register here. If you know of anyone else who might like to come, please pass on this invitation.
Cheers
Jane. 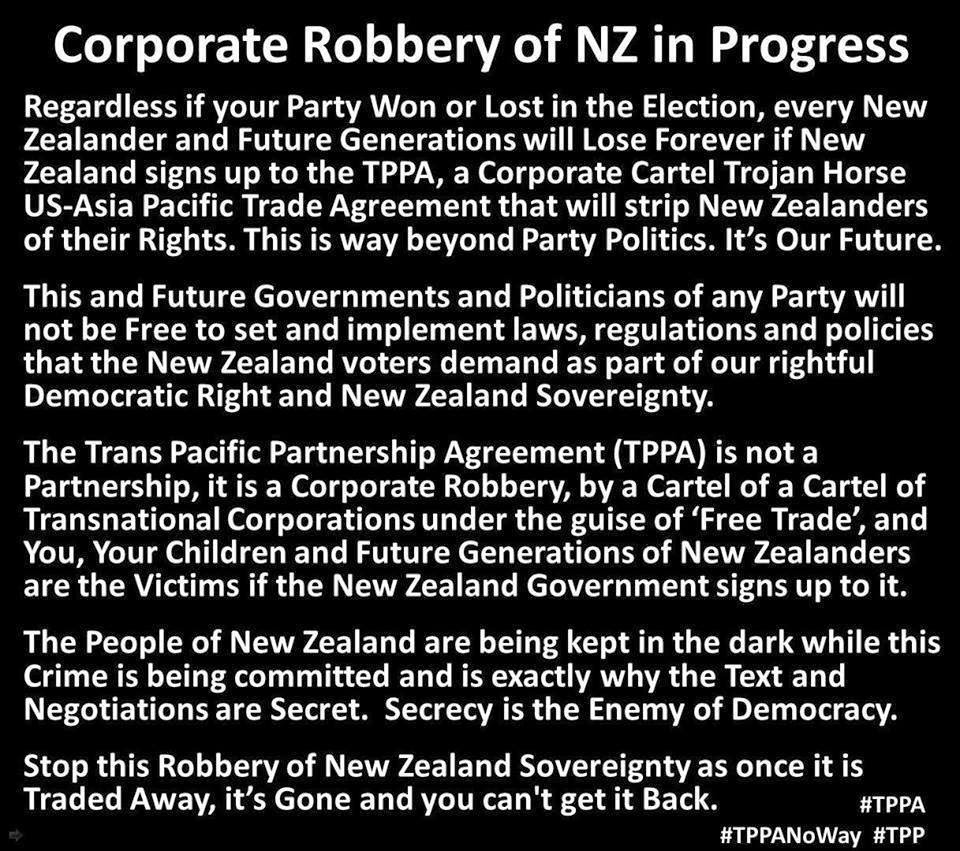 Malaysia may lose RM5bil from trade in the TPPA

http://www.malaysiakini.com/letters/278485
A new paper by a senior economist working in a United Nations agency has shown that Malaysia will not enjoy a net gain in terms of its trade balance as a result of joining the Trans-Pacific Partnership Agreement (TPPA). Instead, Malaysia will suffer a decline in its trade balance with the other 11 TPPA countries by nearly RM5 billion.

This finding provides another major reason why Malaysia should not join the TPPA.

From arguments put forward by the International Trade and Industry Ministry (Miti), Malaysia will gain from the TPPA by being able to sell more exports to the 11 other TPPA countries.

Even if this is true, analysts and critics including the Consumers Association of Penang (CAP) have argued that it is dangerous to join the TPPA because of the economic and social harm to our country and our people caused by other aspects of the TPPA.

These chapters will result in Malaysia having to change many of our policies and laws, causing harm to the public interest including in areas of health, environment, distributional issues and political economy.

Even if the country enjoys a big gain in trade, it is not worthwhile sacrificing our loss of freedom and space to formulate our own policies, and not worthwhile to suffer so much damage to our economy and to our social fabric.

However, the new study shows that Malaysia will not even gain from trade if it signs the TPPA.    Instead, Malaysia will lose by at least RM4.77 billion in trade terms, as our imports will increase by more than our exports.

According to the paper, if  Malaysia joins the TPPA, its exports will increase to the other TPPA countries, but its imports from them will increase by even more, and thus the country will have a net loss in its trade balance.  The trade balance is the difference between the value of export and import of goods.

Therefore the balance of trade for Malaysia with its 11 TPPA partner countries will worsen by US$1.465 billion (or RM4.79 billion).  Its trade surplus will fall from US$19.84 billion to US$18.37 billion.

The meaning of this is that Malaysia will not gain in net terms from the increased trade as a result of the TPPA. As imports will rise faster than exports, Malaysia will suffer a net loss in its trade balance. The loss is significant, i.e. US$1.465 billion or RM4.79 billion (at the exchange rate at Oct 17 of US$1 = RM3.27).

This worsening of Malaysia’s balance of trade may even be more than the paper’s conclusion.  This is because the paper assumes that Malaysia will be able to export more textiles and clothing to the United States, at zero tariffs and without any other impediment.

The new paper, ‘Trans Pacific partnership Agreement (TPPA): Implications for Malaysia’s Domestic Value Added Trade’, is written by Dr Rashmi Banga, a senior economist working in the United Nations Conference on Trade and Development (UNCTAD).    It is published by the Centre for WTO Studies as a Working Paper.

In estimating the effects of the TPPA on Malaysia’s trade in goods, the paper assumes that the TPPA results in zero import duties in the products of the 12 TPPA countries. (This is a reasonable assumption as the aim of the TPPA countries is to eliminate tariffs on all or almost all products.)

The paper can be downloaded from this website link.

Some other interesting findings

The paper also has other interesting findings. These findings, and some implications of these findings are as follows:

The paper shows that imports will increase by more than US$100million (or RM327 million) a year in a number of  products  including  vehicles, iron and steel, plastics, boilers, rubber products, and tobacco. For these products, 36-85 percent of these imports will be new net imports, not just a change of the source of imports from non TPPA countries to TPPA countries.

An example of the higher imports due to the TPPA is an increase in imports of cars and trucks from Japan by US$534 million (or RM 1.75 billion). This may have an adverse effect on the sales of vehicles that are produced in Malaysia.

A large part of the increase in Malaysian exports will be to Vietnam. However, even if Malaysia does not join the TPPA, it would eventually enjoy this increase in exports to Vietnam when the full Asean free trade agreement is implemented. According to the paper, 57 percent of Malaysia’s increased exports resulting from the TPPA are to Vietnam  (US$843 million out of a total US$1,486 million).

- Due to the TPPA, Malaysia’s trade balance with the US will probably decline by at least RM1 billion.  Malaysia’s exports to the USA will increase by only US$378 million but imports from the USA will rise by US$679 million. Thus in terms of trade balance there will be a loss of US$301 million (RM984 million).

In fact the gain for exports for Malaysia will be less, because of the ‘yarn forward rule’ which will reduce the increase in Malaysian textiles exports because that rule will increase the cost of production. Thus the trade surplus that Malaysia enjoys with the USA may decline by more than RM1 billion due to the TPPA.

- Although Malaysia’s gross export earnings will rise by US$1.5 billion, in fact there will not be gains in net terms or value added terms. This is because the TPPA will also increase the imports of components that are used as inputs into the exports, and these imports will displace some of the locally produced inputs. In terms of ‘value added’ (what is produced and earned in Malaysia),  the TPPA will result in less value added of Malaysian export earnings.

The loss in value added of Malaysia’s exports to TPPA countries can be as much as US$17.6 billion, according to the paper. Value added of exports is more important to the economy, as compared to gross exports, as it is a much better measure of the income (and also local employment) of the country.

The previous study was on estimates based on Computable General Equilibrium (CGE) models.  The new paper by Dr Rashmi Banga gives a critique of the assumptions of these CGE models which overstate the gains because of unrealistic assumptions, including that there is full employment that is maintained (and  thus no effect  of the TPPA on employment) and that there would be a constant trade balance before and after the trade agreement.

The models are thus designed in a manner that the liberalisation resulting from the FTA will always lead to an overall gain.

The new paper has several conclusions which are very significant.  One of these is that Malaysia will not enjoy net gains but will instead suffer net losses in trade in goods as a result of joining the TPPA.

This is a very disturbing result, with major implications.

It is clear that Malaysia will suffer very significant losses in other areas of the TPPA, including intellectual property, investment, government procurement, state-owned enterprises and ban or restrictions on export taxes.

It is the assumption that all these losses and damage to the Malaysian economy and society and to our system of political economy may be worthwhile because of the assumed enormous benefits for Malaysia from expanded trade in goods.

However, if there is also a net loss to the country’s trade balance due to the TPPA, then there is really no rationale at all to want to join the TPPA.

Given the new information, CAP urges the government not to join the TPPA and instead to exit from the negotiations.  There is no reason to continue using the country’s scarce resources in taking part in negotiations that are expensive and that carries the high risk that the country will sign on to an agreement that is very damaging to the country’s interests.

Posted by seemorerocks at 19:36