Saudi harebrained scheme to grow wheat in the desert

Saudi Arabia Stakes a Claim on the Nile
After draining four-fifths of its massive underground aquifer for unsustainable agriculture, the Saudi Kingdom turns to verdant Ethiopia. 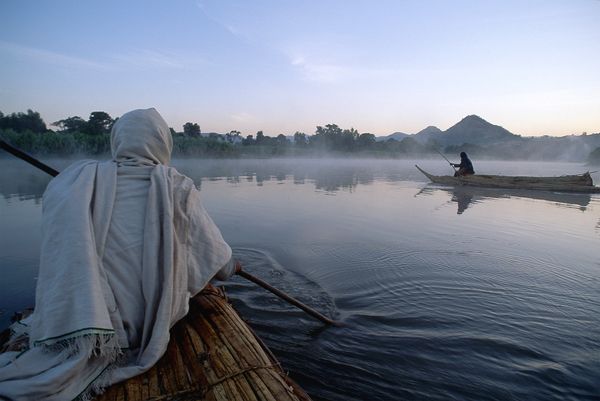 The cows appear on the horizon like a mirage. Drive about a hundred miles (160 kilometers) through the Arabian Desert southeast from Riyadh, and you will come across one of the world's largest herds of dairy cattle. Some 40,000 Friesian cows survive in one of the driest places on the planet, with temperatures regularly reaching 110°F (43°C).

The cows live in six giant air-conditioned sheds, shrouded in a mist that keeps them cool. They churn out 53 million gallons (200 million liters) of milk a year, which heads off down the highway in a constant stream of tankers.

Welcome to Al Safi, one of the world's largest and most improbable dairy farms, the creation of the late prince, Abdullah al Faisal, eldest son of Faisal, the Saudi king from 1964 to 1975. It is not alone in one of the largest bodies of sand in the world, more than three times the size of Texas. Down the road is the Almarai dairy farm, almost as big, the creation of a racehorse-breeding Saudi prince and his Irish chum, dairy magnate Alastair McGuickan.

Anyone flying over Saudi Arabia today will see the desert dotted with cow sheds and huge circles of green, where crops to feed both the cows and Saudis are grown. The water to irrigate those fields, and cool those cows, does not come from rivers. There are no rivers. It comes from what was once one of the world's largest reserves of underground water. More than a mile beneath the sand, the water was laid down tens of thousands of years ago during the last ice age, when Arabia was wet.

The sheikhs of Saudi Arabia have been farming the desert in this way for 30 years, spending hundreds of billions of dollars of oil revenues to pursue their dream of self-sufficiency in food. The Saudi government has been paying farmers five times the international price for wheat, while charging nothing for the water, and providing virtually free electricity to pump that water to the surface. Fortunes have been made as the giant pivots green the desert, and cows graze in their mist-filled sheds.

But now many of the pumps are being silenced and the spigots turned off. The Saudi government says wheat-growing must cease by 2016, and the water-cooled cow sheds may be abandoned soon after.

The water is running out.

The mirage of water in the desert, and of food self-sufficiency for a desert nation, is fading. (See "Kingdom on Edge: Saudi Arabia" in National Geographic magazine.)

Forty years ago, when the farming started, there was a staggering 120 cubic miles (500 cubic kilometers) of water beneath the Saudi desert, enough to fill Lake Erie. But in recent years, up to five cubic miles (20 cubic kilometers) has been pumped to the surface annually for use on the farms. Virtually none of it is replaced by rainwater, because there is no appreciable rain.

Based on extraction rates detailed in a 2004 paper from the University of London, the Saudis were on track to use up at least 400 cubic kilometers of their aquifers by 2008. And so experts estimate that four-fifths of the Saudis' "fossil" water is now gone. One of the planet's greatest and oldest freshwater resources, in one of its hottest and most parched places, has been all but emptied in little more than a generation.

Parallel to the groundwater pumping for agriculture, Saudi Arabia has long used desalination of seawater to provide drinking water. But, even for the cash-rich Saudis, at about a dollar per 35 cubic feet (one cubic meter), the energy-intensive process is too expensive to be used for irrigation water.

But the Saudis have not abandoned their dream of growing their own food. If they no longer have water of their own, they are looking to someone else's. They are scouring the world for well-watered lands where their desert farmers can move to grow wheat, rice, and other crops that can be shipped home. But will their actions bring another tragedy, this time a human one as much as a hydrological one?

Grabbing the Headwaters of the Nile?

To find out, in mid-2011 I traveled some 1,500 miles (2,400 kilometers) south of Riyadh, across the Red Sea, to meet some poor Africans who say they are paying the price for the Saudi dream. They live in Gambela, the most impoverished corner of Ethiopia, at the headwaters of the Nile River, the world's longest. One of Ethiopia's nine kililoch (divisions), Gambela is a horn-shaped region that protrudes into South Sudan. (See a map of the region.)

Here, amid the wet pastures and forests, unrest is brewing. Locals say the Saudis want their water.

I met Omot Ochan, a tall, dark-skinned member of the Anuak tribe, wearing combat shorts and sitting on an old waterbuck skin in a forest clearing. He was angry. He said the lush forests and marshlands where he and his ancestors have hunted for generations were being taken by Saudi Star, a company owned by one of Saudi Arabia's richest men, Sheikh Mohammed Hussein Ali al Amoudi.

Yards from his hut, the company was digging a canal that Ochan said would drain the nearby wetland, where he fished. And nearby, al Amoudi's 24,711-acre (10,000-hectare) farm had taken over a reservoir built by Soviet engineers in the 1980s.

Government officials had told Ochan and hundreds of others that they had to move out of the forest and into government villages. Ostensibly the purpose was to provide better services, but Ochan believed the real reason was to clear the land for al Amoudi, a friend and sometime campaign financier of Ethiopia's prime minister at the time, Menes Zenawi.

Half an hour later, I drank tea in the shade of a huge mango tree with one tribal elder who spoke to me quietly about how he and his fellows had been forcibly moved from their fields. But he told me: "We have decided, each of us, that in the rainy season we will go back and cultivate our ancestral land. If they try and stop us, conflict will start."

And they were as good as their word. Months after my visit, in April this year, unnamed local gunmen invaded Saudi Star's company camp near the town of Abobo. They killed at least five workers. In an effort to root out the culprits, government soldiers allegedly went on a rampage in local villages, rounding up and torturing men and raping women.

The group Human Rights Watch interviewed some of those who fled to neighboring South Sudan afterward. The people said that their original raid was in retaliation for the company grabbing their land and water. A local churchman told me: "My son has gone but wants to come back and fight."

Wildlife at Risk?
This may be a wildlife tragedy, too. The waters of Gambela are vital to millions of white-eared kob, antelopes that cross from South Sudan in the dry season in search of the open water and wetlands at the head of the Nile. These animals—along with a scattering of elephants, an endangered antelope called the Nile Lechwe, and the giant shoebill stork—were the main reason for the creation back in the 1970s of the Gambela National Park. But the park has not been fully secured and much of its land has been given to Saudi Star. The migrating animals now face tractors, canals, and fenced pastures.

All this for water? The Saudis are determined that they will continue to feed their own people. They have plenty of land, but no water. They fear that, without water, even their oil will not save them from a perilous future of food insecurity. As one senior Saudi official told me: "We cannot eat oil." So they are determined to buy foreign land that has access to plentiful water.

Asked about the Saudi Star water grab in Gambela earlier this year, the Saudi minister for agriculture, Fahd bin Abdulrahman Balghunaim, said: "I honestly never heard any complaint coming out of Africa. What I read were some articles written by foreign correspondents about things happening in Africa, which we did not see happening."

The King Abdullah Initiative for Saudi Agricultural Investment Abroad, launched in 2008, is providing government credit and diplomatic support for Saudi companies buying up foreign land and water to feed Saudis. Schemes are under way from the banks of the Senegal River in West Africa to the rain forests of Indonesian New Guinea. In most deals, Saudi investors have generous access to water and the right to export at least 50 percent of the harvest back to Saudi Arabia.

Some host governments are happy with these terms. Ethiopia's Zenawi, who died in August, had an instant answer to those who criticized his largesse toward his Saudi friend. "We want to develop our land to feed ourselves, rather than admire the beauty of fallow fields while we starve," he said.

Fair enough. But a 2012 report from one of Africa's biggest banks, Standard Bank in South Africa, suggests he was wrong and that Saudi investments may be bad value for the continent. "For African countries courted by Saudi agribusiness firms, a clear appreciation of the value of the asset on which they rest is necessary," it said. "Under-selling of agricultural assets (both land and, perhaps more critically, water) remains a profound threat."

Ochan and his fellows in the forest say they agree with that.

Fred Pearce is a journalist and author on environmental science. His books include When the Rivers Run Dry and The Land Grabbers, both for Beacon Press, Boston. He writes regularly for New Scientist magazine, Yale Environment 360, and The Guardian, and has been published by Nature and The Washington Post.