Housing shortage forces many to camp
A severe housing shortage is forcing many vulnerable people to live permanently in campgrounds, a Massey University researcher has found. 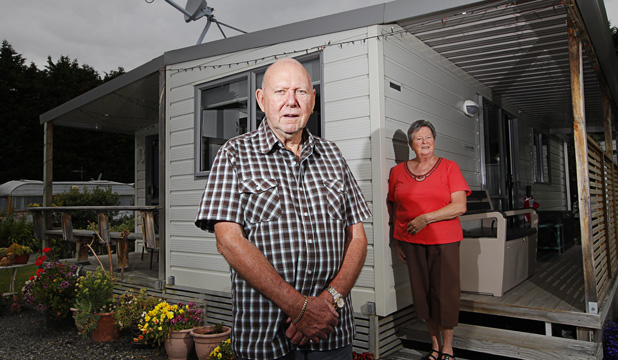 Health and social services lecturer Chrissy Severinsen canvassed traditional holiday spots in the North Island to delve into the lives of their more permanent residents, and unearthed tales of prison, unemployment, poor mental health and deprivation.

The 2006 census counted 3480 people living in New Zealand's 600 camping grounds but Dr Severinsen believed there to be far more.

Many were unable to access or afford mainstream rental homes and had moved from other camping grounds, prison or mental health units. A high number were divorced, single men, who were not considered a priority for Housing New Zealand.

As campground residents, they had no protection under the Residential Tenancies Act.

"A common story is of a couple on benefits with young children who couldn't find a house to rent, so moved to camping ground, only to find they had to move out a month later to make room for Christmas season tourists," she said.

"Rents can be put up with no warning."

However, there are also long-term campground residents by their own volition and who doubted Dr Severinsen's findings.

"You don't have to be known as trailer trash," Wendy Avery, 69, of Lindale Motor Park, Paraparaumu, said.

"As life is going on now, money is getting a bit harder, and I think you will find a lot of people going the trailer home way."

Her views were echoed by caravan owner Wayne Curragh, of Pineacres Holiday Park near Kaiapoi, north of Christchurch, who said: "The idea was I was going to move around but I love it here.

"It's peaceful and quiet, and everything you want is here."

Dr Severinsen, acknowledged there was also a smaller group of retired people who made a lifestyle choice to travel and live in mobile homes.

"These residents generally have a higher standard of living and do not face the severe housing deprivation experienced by the majority of residents."

She said informal social ties in campgrounds could prevent isolation and loneliness but she questioned whether that outweighed the detrimental effects of inadequate, mouldy and wet dwellings, and an insecurity of tenure.

But Mrs Avery and husband Warwick, 76, said their new lifestyle appealed. They sold their Waikanae townhouse about 10 years ago and planned a life on the road in their caravan.

But when a leaky van forced them to forgo those plans, they found the rising property market had forced them out of a return to a house.

They owned their $72,000, 49-square-metre trailer home, the rent was cheap, and the lifestyle was good, Mr Avery said.

"You would be hard pushed just living on a pension to run a house properly. Money goes a bit further living like this.

"This is our house, this is it, this is where we live."

Lindale Motor Park owner Mick Orr said about two-thirds of his campground was filled with long-term residents, who paid about $140 a week for rent, power, use of facilities and water.

"I wanted to be on the road, no other reason," he said.

"I think the concept of trailer homes in the past has been trailer trash. That is not the case here any more."

And it was a good community at Lindale.

"Here you have no damn choice, you have to talk to people. And I like that."

Mr Curragh, who moved into the Pineacres Holiday Park four years ago and now manages it, loves his new lifestyle so much he will never go back to living in a house. Life was simpler, with fewer problems to deal with, such as burglaries, unwanted visitors and pesky neighbours.

"We don't have a lot of problems. All you hear of is things like the other day when someone cooked a chicken in the kitchen and they came back and the chicken was there, minus one drumstick."