Germany prepares for austerity
Recommendations by the German Finance Ministry point to a drastic increase in taxes and a cut in social services, an analysis says. Although the government and the opposition in 2013's elections are pledging higher benefits for pensioners, families and the long-term unemployed, Finance Minister Wolfgang Schauble is planning cutbacks to prepare for a weakening economy, the German magazine Der Spiegel reported Tuesday.

The European debt crisis is prompting the planning of an austerity budget, and finance officials are scrutinizing subsidies, entitlements and other welfare benefits worth tens of billions of euros, the magazine said.

Schauble's team envisions encouraging Germans to work past the official retirement age of 67 to counter a labor shortage, and intends making retirement less attractive by removing "inappropriate incentives" -- the advisers wrote in a position paper -- by reducing pension payments 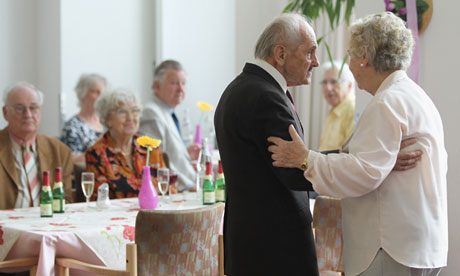 Growing numbers of elderly and sick Germans are being sent overseas for long-term care in retirement and rehabilitation centres because of rising costs and falling standards in Germany.

The move, which has seen thousands of retired Germans rehoused in homes in eastern Europe and Asia, has been severely criticised by social welfare organisations who have called it "inhumane deportation".

But with increasing numbers of Germans unable to afford the growing costs of retirement homes, and an ageing and shrinking population, the number expected to be sent abroad in the next few years is only likely to rise. Experts describe it as a "time bomb".

Germany's chronic care crisis – the care industry suffers from lack of workers and soaring costs – has for years been mitigated by eastern Europeans migrating to Germany in growing numbers to care for the country's elderly.

But the transfer of old people to eastern Europe is being seen as a new and desperate departure, indicating that even with imported, cheaper workers, the system is unworkable.

Germany has one of the fastest-ageing populations in the world, and the movement here has implications for other western countries, including Britain, particularly amid fears that austerity measures and rising care costs are potentially undermining standards of residential care.

The Sozialverband Deutschland (VdK), a German socio-political advisory group, said the fact that growing numbers of Germans were unable to afford the costs of a retirement home in their own country sent a huge "alarm signal". It has called for political intervention.

"We simply cannot let those people who built Germany up to be what it is, who put their backbones into it all their lives, be deported," said VdK's president, Ulrike Mascher. "It is inhumane."

Researchers found an estimated 7,146 German pensioners living in retirement homes in Hungary in 2011. More than 3,000 had been sent to homes in the Czech Republic, and there were more than 600 in Slovakia. There are also unknown numbers in Spain, Greece and Ukraine. Thailand and the Philippines are also attracting increasing numbers.

The Guardian spoke to retired Germans and people needing long-term care living in homes in Hungary, Thailand and Greece, some of whom said that they were there out of choice, because the costs were lower – on average between a third and two-thirds of the price in Germany – and because of what they perceived as better standards of care.

But others were evidently there reluctantly.

The Guardian also found a variety of healthcare providers were in the process of building or just about to open homes overseas dedicated to the care of elderly Germans in what is clearly perceived in the industry to be a growing and highly profitable market.

According to Germany's federal bureau of statistics, more than 400,000 senior citizens are currently unable to afford a German retirement home, a figure that is growing by around 5% a year.

The reasons are rising care home costs – which average between €2,900 and €3,400 (£2,700) a month, stagnating pensions, and the fact that people are more likely to need care as they get older.

As a result, the Krankenkassen or statutory insurers that make up Germany's state insurance system are openly discussing how to make care in foreign retirement homes into a long-term workable financial model.

In Asia, and eastern and southern Europe, care workers' pay and other expenses such as laundry, maintenance and not least land and building costs, are often much lower.

Today, European Union law prevents state insurers from signing contracts directly with overseas homes, but that is likely to change as legislators are forced to find ways to respond to Europe's ageing population.

The lack of legislation has not stopped retired people or their families from opting for foreign homes if their pensions could cover the costs.

But critics of the move have voiced particular worries about patients with dementia, amid concern that they are being sent abroad on the basis that they will not know the difference.

Sabine Jansen, head of Germany's Alzheimer Society, said that surroundings and language were often of paramount importance to those with dementia looking to cling to their identity.

"In particular, people with dementia can find it difficult to orientate themselves in a wholly other culture with a completely different language, because they're very much living in an old world consisting of their earlier memories," she said.

With Germany's population expected to shrink from almost 82 million to about 69 million by 2050, one in every 15 – about 4.7 million people – are expected to be in need of care, meaning the problem of provision is only likely to worsen.

Willi Zylajew, an MP with the conservative Christian Democrats and a care service specialist, said it would be increasingly necessary to consider foreign care.

"Considering the imminent crisis, it would be judicious to at least start thinking about alternative forms of care for the elderly," he said.

Christel Bienstein, a nursing scientist from the University of Witten/Herdecke, said many German care homes had reached breaking point due to lack of staff, and that care standards had dropped as a result.

"On average each patient is given only around 53 minutes of individual care every day, including feeding them," she said. "Often there are 40 to 60 residents being looked after by just one carer."

Artur Frank, the owner of Senior Palace, which finds care homes for Germans in Slovakia, said that was why it was wrong to suggest senior citizens were being "deported" abroad, as the VdK described it.

"They are not being deported or expelled," he said. "Many are here of their own free will, and these are the results of sensible decisions by their families who know they will be better off."

He said he had seen "plenty of examples of bad care" in German homes among the 50 pensioners for whom he had already found homes in Slovakia.

"There was one woman who had hardly been given anything to eat or drink, and in Slovakia they had to teach her how to swallow again," he said.

German politicians have shied away from dealing with the subject, largely due to fears of a voter backlash if Germany's state insurers are seen to be financing care workers abroad to the detriment of the domestic care industry.

Posted by seemorerocks at 21:15