Inquiring minds are noting the expected (at least in this corner) collapse in European retail sales as measured by PMI indices in Italy, France, and Germany, the three largest Eurozone economies.

This article will look at Germany and Italy, the first and third biggest eurozone economies.
Italy 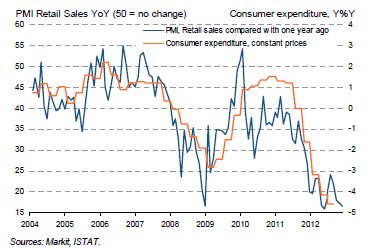 
Italy’s retail sector remained in a steep downturn in December, with sales dropping sharply according to both monthly and yearly measures. Gross margins decreased amid a further rise in average wholesale prices, while firms cut employment and purchasing activity in line with lower sales. The month also saw business sentiment hit a record low.

December data pointed to another sharp month-on-month drop in Italian retail sales. This was signalled by Italian Retail PMI® registering 36.8, up from November’s seven-month low of 35.5 but slightly below its average over the year as a whole of 37.2. The latest decrease in high street spending was the twenty-second in consecutive months, and attributed by panellists to greater tax burdens, weak consumer sentiment and media scaremongering.

When measured on a year-on-year basis, the decline in retail sales was one of the most marked since data collection began in January 2004. In fact, only in December 2008 and May 2012 have faster annual rates of decline been recorded.


Phil Smith, economist at Markit and author of the Italian Retail PMI®, said: “2012 surpassed 2008 as the worst year in the survey’s history, with the PMI showing sharp monthly contractions in high street spending throughout and never once climbing above its pre-2012 historic average. The series measuring year-on-year changes in sales hit a record low back in May and came close to that mark in the latest survey period as consumer spending power was weakened further amid added tax pressure. Firms persistent attempts to boost sales through discounts have proved largely fruitless over the past 12 months, such has been the extent of the downturn in demand among Italy’s households.” 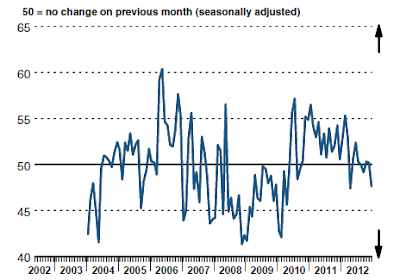 The seasonally adjusted Germany Retail PMI dropped to 47.6 during December, from 50.2 in November, signalling a moderate month-on-month contraction in like-for-like sales. December’s index reading was below the long-run series average (49.8) and pointed to the sharpest pace of contraction for eight months. Reports from retailers in Germany suggested that strong competition, unfavourable weather conditions and unexpectedly low consumer footfall had all contributed to lower sales.

German retailers signalled that actual sales at their stores fell short of prior expectations in December, continuing the trend of weaker than expected sales for the ninth month running. Moreover, the degree to which sales failed to reach initial targets was the most marked for any December since that recorded in 2009. Meanwhile, expectations for sales in the month ahead were the weakest since December 2009, with some retailers suggesting that earlier than planned promotional discounting will have a negative influence on like-for-like sales in January.

Operating margins in the German retail sector declined again in December, thereby extending the current period of contraction to 25 months. Anecdotal evidence suggested that lower margins reflected strong competition and a sharp rise in average cost burdens during the month.


Note that high street spending is in its twenty-second consecutive month of contraction.

Also note (and laugh at) the blame placed on "media scaremongering".

Germany Back in Contraction


German retail spending is back in contraction and this time I expect it to stay there, while laughing at the blame placed on "unfavourable weather conditions and unexpectedly low consumer footfall".

Signs point to a full-blown eurozone recession that is worsening nearly every month.

Germany cannot possibly be immune from this and indeed I blasted the IMF for proposing just that on January 9, 2012 in Dimwit Comment of the Day: Christine Lagarde, IMF Director says "Europe May Avoid a Recession This Year"


Inquiring minds are noting the expected (at least in this corner) collapse in European retail sales as measured by PMI indices.

The spotlight for this post is France, the second largest Eurozone economy following Germany. 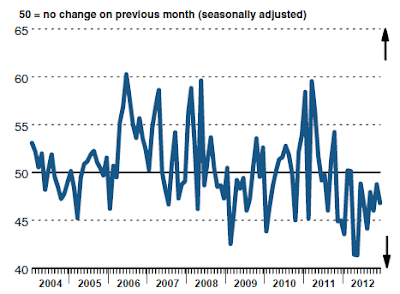 
French retailers reported another month-on-month decline in sales during December – the ninth in succession which is a survey record. Sales were also down on an annual basis, and fell well short of retailers’ plans. Gross margins remained under considerable pressure, partly reflecting a strong and accelerated rise in purchasing costs.

The headline Retail PMI® slipped to 46.8 in December, from 48.8 in November. The latest reading was indicative of a solid rate of contraction. Anecdotal evidence suggested that a difficult economic climate and low customer footfall had contributed to the drop in sales.

Actual sales at French retailers once again disappointed relative to previously set plans in December. The degree of undershoot was the greatest since August. Survey respondents are also pessimistic regarding the one-month outlook for sales.


Factors expected by retailers to boost sales over the coming three months include cold weather, new product launches and promotions. Those factors expected to depress sales include a weak economy, depressed consumer confidence and increased taxes.

Latest data indicated that French retailers’ gross margins remained under strong pressure in December. Margins have declined in every month since February 2008.

Wholesale prices faced by French retailers continued to increase in December. The rate of inflation accelerated to the sharpest since February. Panellists reported that suppliers had generally raised prices in order to pass on higher raw material costs.


Retail sales in France fell for the 9th consecutive month, a new record. Deterioration is marked as well as expected.


Because of the sharp rise in inflation, things are even worse than they look at first glance of the PMI numbers.


The horrendous policies from president Francois Hollande and his socialist cronies including ridiculous tax hikes and inane rules on firing workers are going to cause massive heartburn (to put things mildly).


I have to laugh at the comment by Markit that "low customer footfall had contributed to the drop in sales". Nearly as amusing, note that retailers expect "increased sales because of cold weather."


For further reading, please consider economically insane proposal by French president Francois Hollande "Make Layoffs So Expensive For Companies That It's Not Worth It"


Given that any clear-thinking person should quickly realize that if companies cannot fire workers they will be extremely reluctant to hire them in the first place , it should be no surprise to discover French Unemployment Highest in 14 Years (And It's Going to Get Much Worse).


In France, Government spending amounts to 55% of total domestic output. For discussion, please see Hollande's Honeymoon is Over; 54% of Voters Unhappy; Unions Promise "War" in September.


Looking ahead to 2013, I Expect things in France to get worse at an accelerated pace.