Storms in the Northern Hemisphere 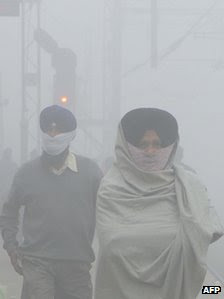 
At least 25 people have died in a cold snap sweeping across northern India, state-run broadcaster All India Radio has said.

The majority of deaths were in the state of Uttar Pradesh. Rajasthan, Punjab and Haryana are among the other northern states badly hit.

Most deaths were among homeless and elderly people.

Heavy fog has disrupted flights and train services out of the capital, Delhi, and neighbouring states.

The capital Delhi is also affected by the cold spell, with temperatures dipping to 7C and fog disrupting flight schedules.

Dense fog has also affected train services and flights in Rajasthan, where temperatures fell to 3.8C.