The US will continue to make its own contribution to killing Yemeni children with its drone attacks.

Food shortage threatens to kill thousands of Yemeni children
For decades Yemen has suffered critical food shortage affecting nearly half the country’s population of 25 million, including hundreds of thousands of children. 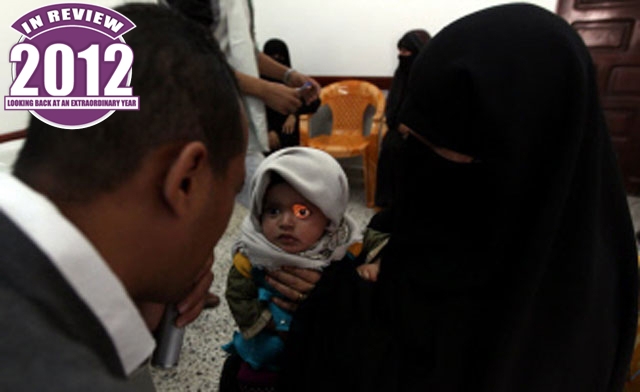 
A popular uprising against a decades-old dictatorship and the consequent instability further damaged the country’s already poor infrastructure and weakened the government’s ability to provide basic services to the poor.

About 60 percent of Yemeni children were chronically malnourished and about 15 percent – 257 thousand children under the age of five – suffer from acute malnourishment, according to a report by UNICEF Yemen. At least 700,000 are reportedly suffering from Moderate Acute Malnutrition (MAM).

Chronic malnutrition is “a huge challenge for Yemen ever since we have been able to collect data on it,” he added.

Hopkins said there are critical long-term outcomes to children diagnosed with chronicle malnourished.

“A child who is chronically malnourished will suffer lifelong problems and physical challenges. He or she will not reach full development.”

In June 2012, UNICEF in Yemen reported that approximately 10 million people throughout the country lack access to food security, with nearly a million children suffering from acute malnutrition.

He explained that a child with acute malnutrition would be “extremely thin, frail, and likely to die if no interventions” were to take place.

Lack of food and sanitary water

According to data gathered by UNICEF, half of the severely acutely malnourished children suffer from diarrhea as a result of “not washing [their] hands after going to the toilet” accompanied by other unhealthy hygiene practices.

Poor food products may also lead a child to become vulnerable to acute or chronicle malnourishment.

This may happen if a mother doesn’t feed her child for the first six months following birth as "the child is highly likely to suffer,” said Hopkins.

A child who suffers from acute malnutrition requires “rapid intervention” clinically and needs food supplements which are provided by UNICEF through the government.

Government and NGO partners are working together to insure raising the awareness to families on the seriousness and leading causes of malnutrition and how to prevent it.

In May, Gulf Arab states and the West have pledged more than $4 billion in aid to the impoverished state. More than $3.25 billion was provided by Saudi Arabia alone.

UNICEF along with other humanitarian partners continue to advocate for the government to assume full responsibility in the implementation of the action plans associated with the recently approved national food security, nutrition, and several other nutrition-related development and humanitarian strategies.