Thousands still homeless after Evan
More than 8000 people remain homeless over a week after Cyclone Evan ripped across Samoa, Wallis and Futuna and Fiji, the United Nations said today. 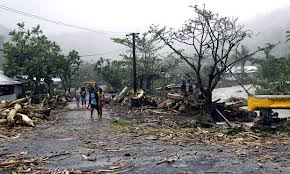 Their Humanitarian Affairs unit said in its latest situation report there were 2714 people in evacuation centres in Fiji one week on.

In the French islands of Wallis and Futuna 290 homes have been damaged.

The death toll in Samoa is 15 with people still missing at sea. Fiji said it had no deaths from the cyclone but the UN said one man was missing at sea.

It also said that as a result of Evan, 18 people had typhoid in Ba, in Viti Levu.

The UN said Samoa's economy would be as hard hit by Evan, coming on top of the 2009 tsunami that destroyed 20 villages and killed 143 people.

As a result of Evan, the tourism industry said repairs to its infrastructure were likely to be more than NZ$80 million.

The UN said that while conditions in the Apia evacuation centres were relatively good, there was a shortage of water and storage, food in some centres, lack of power, and a shortage of sanitation facilities.

On Fiji the UN said there had been US$2 million in damages to schools. Preliminary surveys indicated that early planted sugar cane and ratoon cane from the first harvest of the season have been "significantly damaged".

"Preliminary agricultural damage assessment, with around 60 per cent assessed, is approximately US$30 million."

On Wallis and Futuna electricity has been restored to about 45 per cent of the Wallis Island. All fresh food was destroyed by the cyclone, which represents about 30 per cent of the consumable food available. Assessments found 290 houses were damaged, as well as 15 public buildings.

An airport and a hospital were damaged, but both remain functional.