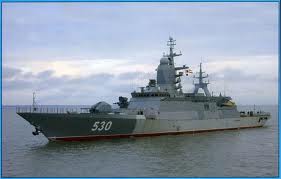 About a dozen Russian warships are conducting a large-scale strategic exercise in the Mediterranean Sea and the Gulf of Aden, a Russian military leader said.

"This part of the world's oceans is very important from the point of view of Russia's geopolitical interests, including the fact that the Russian Navy has a logistical base" in Syria, the representative of the General Staff of Russia's Armed Forces -- whose name was not reported -- said Tuesday. 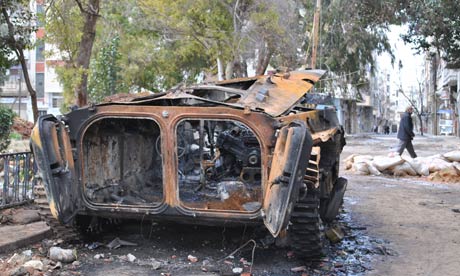 Russian military advisers are manning some of Syria's more sophisticated air defences – something that would complicate any future US-led intervention, the Guardian has learned.

The advisers have been deployed with new surface-to-air systems and upgrades of old systems, which Moscow has supplied to the Assad regime since the Syrian revolution broke out 21 months ago.

The depth and complexity of Syria's anti-aircraft defences mean that any direct western campaign, in support of a no-fly zone or in the form of punitive air strikes against the leadership, would be costly, protracted and risky. The possibility of Russian military casualties in such a campaign could have unpredictable geopolitical consequences.

Meanwhile, near-daily atrocities have kept western governments under pressure to act. A Syrian government air strike on a town near the central city of Hama on Sunday killed dozens of civilians queueing for bread, according to human rights activists.

Amateur footage from Halfaya showed mangled human remains strewn along a street where people had been blown off scooters and out of cars. One video showed a boy with his feet blown off. Piles of corpses could be seen beneath rubble outside a two-storey building the cameraman described as a bakery. It was unclear how many bodies were in the smoking ruins.

Human Rights Watch has previously accused the regime of targeting bakeries. The group warned the Assad regime that such targeted bombing of civilians represented war crimes. However, in the face of a Russian veto at the UN security council, the international criminal court has not had a mandate to investigate the atrocities committed by either side. The UN has put the death toll at more than 40,000 as the war continues to escalate.

Turkish officials, who accurately predicted the Syrian regime would use Scud missiles after several warplanes were shot down by rebels, also believe President Bashar al-Assad has twice come close to using chemical weapons including sarin, the nerve gas. First, after the bombing of the regime's Damascus security headquarters in July, which killed the president's brother in law, Assef Shawkat, and then last month, after opposition forces made significant gains.

The Turks and western officials say there are signs Assad sees chemical weapons as another step in the escalation of force, rather than a Rubicon-crossing gamble that could end his regime. The US, UK, France and Turkey have warned Syria that its use of such weapons would trigger military retribution. But any such a response would be fraught with difficulties.

Air strikes against chemical weapon depots would potentially disperse lethal gases over a vast area, triggering a humanitarian disaster. US and allied special forces have been trained to seize the air bases where the warheads are kept, but it is unclear what the next step would be. It would be physically impossible to fly the hundreds of warheads out of the country, while it would take thousands of troops to guard the arsenal for what could be many months. In the interim, those western troops could easily become the target of Islamist groups fighting the government in Damascus.

Any air strikes against regime targets, in response to chemical weapon use, or any attempt to create a no-fly zone to stop further bombing of refugee camps, would require the suppression of Syria's formidable defences. Those have been bolstered significantly since Israeli strikes on an alleged nuclear reactor site at al-Kibar in 2007 exposed holes, and again since the outbreak of the Syrian uprising in March 2011.

The upgrades were supplied by Moscow, which sees them as a bulwark against western-imposed regime change and protection of a longstanding investment in Syria. The country includes Russia's biggest electronic eavesdropping post outside its territory, in Latakia, and its toehold on the Mediterranean, a small naval base at Tartus.

Russian security and defence officials, who are notoriously loth to publicly comment on their operations abroad, have repeatedly denied providing explicit support for the Assad regime.

Over the weekend, the head of Russia's ground forces air defence, Major General Alexander Leonov, told the Ekho Moskvy radio station: "Syria's air-defence system is a no-nonsense force. As a result, no one has ever used serious air combat power against it."

That "no-nonsense" force, the air defence command, comprises two divisions and an estimated 50,000 troops – twice the size of Muammar Gaddafi's force – with thousands of anti-aircraft guns and more than 130 anti-aircraft missile batteries.

According to Jeremy Binnie, the editor of Jane's Terrorism and Security Monitor, recent Russian deliveries include Buk-M2 and Pantsyr-S1 (known to Nato as SA-22) mobile missile launch and radar systems. Reports of the shipment of the modern long-range S-300 have not been confirmed, and the Syrian armed forces did not show off any S-300 missiles in a military display this year. It is possible they have been delivered but are not yet operational.

Guy Ben-Ari, a senior fellow at the Washington-based Centre for Strategic and International Studies, said: "They don't just sell the equipment. They also help man the crews and train the crews. Sometimes there is just no domestic capacity to run these systems, and that is the case in Syria where Syrian crews are not capable of using the equipment to its full capacity."

Sources familiar with the Moscow-Damascus defence relationship confirmed the presence of Russian air-defence crews inside Syria. Their deployment would be a consideration when western contingency plans for Syria were being considered, they said.

Such a dense, layered and overlapping air-defence system would require a huge air campaign, heavily reliant on thousands of precision-guided missiles. The UK, France and other American allies in Europe used up their stocks of such weapons in Libya and although details are classified there have been reports that they have not yet returned to pre-Libya levels.

"We know they pretty much ran out of them at the end of Libya. Given the budgetary constraints the Europeans are operating with, and in an era where every euro spent on defence is very heavily scrutinised, it is a hard sell to restock on this stuff," Ben-Ari said. "And it would not be enough to be at Libya levels. You would need far more for Syria."

A Syrian air campaign would also require stealth aircraft and a great amount of signals intelligence, satellite imagery and aerial reconnaissance, all of which are US specialities. For all those reasons, Washington would not be able to "lead from behind" as it did in Libya.

The Obama administration has so far been extremely wary of getting enmeshed in another Middle East war, particularly with the knowledge that the long-running Iranian nuclear crisis could trigger a conflict in the Gulf at any time. With the resignation of CIA director David Petraeus last month, the administration arguably lost its most powerful advocate of Syrian intervention.

John Kerry, the nominee for secretary of state, has advocated greater support for the rebels, but stopped short of calling for direct US or Nato involvement. With no new secretary of defence yet nominated, it could take several months for the new team to recalibrate its approach.

The robust Syrian defences, combined with Damascus's hand-in-glove relationship with Moscow, and the fragmented nature of the opposition, help explain why a US-led intervention – predicted as imminent for more than a year by advocates and opponents alike – has so far failed to materialise, and why there is little appetite for such a move in Washington and most other western capitals, barring a major, verifiable use of chemical weapons by the Assad regime.