3 kg gold for the ambassador's head


Al-Qaida offers bounty for US ambassador in Yemen 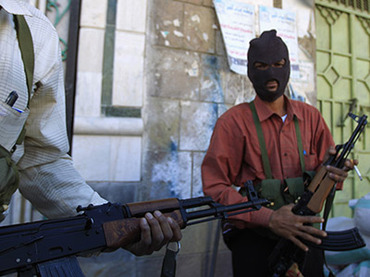 Al-Qaeda’s Yemen branch has announced it will pay thousands of dollars in gold to anyone who kills the US ambassador in Sanaa, the capital, or any American soldier in the country.

An audio message produced by the al-Malahem Foundation, Al-Qaeda’s media arm, and posted on militant Islamist websites on Saturday, said the group is offering 3kg of gold, worth $160,000, for the ambassador’s head.

It is also offering 5 million Yemeni Riyal (US$23,000) to anyone who kills an American soldier in Yemen.

The message continued that the offer is valid for six months and the bounties were to “inspire and encourage our Muslim nation for Jihad”. However, it did not say how the money could be collected.

The US considers the Yemeni branch of Al-Qaeda to be the most dangerous in the world.

The audio message comes a day after three Al-Qaeda militants were killed by a US drone strike in Yemen’s southwestern al-Bayda province.

Yemini officials said one of the men killed was Saleh Mohammed al-Ameri, a senior Al-Qaeda operative.

The men were hit as they traveled in a car in the village of el-Manaseh on the outskirts of the town Radda. A local tribesmen at the scene said the car has been totally destroyed by the attack, the bodies merely charred carcasses.

There has been a spate of US drone attacks on Al-Qaeda militants recently. While the US does not normally confirm drone strikes, this was the fourth suspected strike in a week. On Friday, two suspected militants were killed in eastern Hadramount province, while at least five were killed in two strikes on December 24.

It was reported in the US press in June this year that President Obama for the first time admitted in a letter to congress that American forces were engaged in “a limited number” of operations against members of Al-Qaeda operatives in Yemen, saying that they posed a terrorist threat to “the United States and our interests.”

But the letter didn’t reveal anything that wasn’t already in news accounts and the US government continues to fight efforts to have it reveal more about its operations overseas, the Washington Post reports.

The bounty in Yemen comes just three-and-a-half months after the attack on the American consulate in Benghazi in September, where US Ambassador to Libya Christopher Stevens was killed, and which was believed to be carried out by Al-Qaeda.

In an interview with NBC’s Meet the Press on Sunday, Obama said that the investigation into the Benghazi attack was ongoing and that the FBI had some important leads into who carried it out.

An investigation by the Accountability Review Board blamed the US State Department for inadequate security measures at the consulate and highlighted systematic mismanagement that left the building vulnerable to attack. In the NBC interview Obama admitted that there was sloppiness in regard to security at the consulate, but that the mistakes were not intentional.