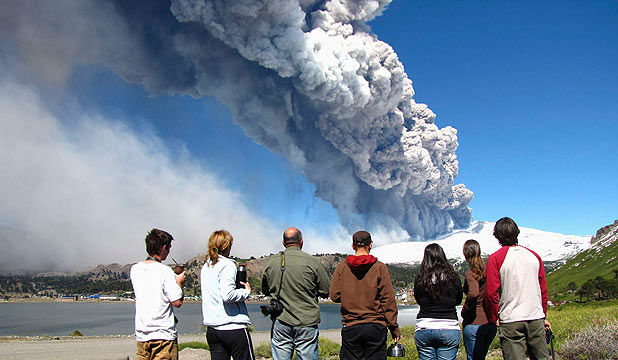 Chilean authorities on Sunday issued a red alert -- the most severe in their warning system -- that the Copahue Volcano, high in the Andes mountains on the border with Argentina, might be poised for a significant eruption.

In a statement, Chile's Geological and Mining Service stressed that no mandatory evacuations have been ordered around the remote volcano, which lies about 280 kilometers southeast (175 miles) of Concepcion, though the closest roads to it are in Argentina.

Even though the seismic activity suggests a minor eruption, the agency decided to raise the alert level because it could not rule out a major eruption. The service warned specifically about potentially dangerous mudslides within a 15-kilometer (9.3-mile) radius of the crater.

Alto Biobio, a community about 60 kilometers (37 miles) east of Copahue, is under the heightened alert. The governor and emergency officials in Biobio province met Sunday afternoon to discuss possible scenarios, including establishing a plan in case a mass evacuation is deemed necessary.

Seismic stations first detected increased activity Saturday, according to the Volcano Observatory of the Southern Andes, which is part of Chile's Geological and Mining Service.

In addition, more gas than normal has been detected coming from the volcano. The black, ash-filled gas has soared as 1.5 kilometers (almost 1 mile) above Copahue and extended 13 kilometers (8 miles) out from it, toward the southeast.

Known in South America as Volcan Copahue, this volcano formed about 500,000 years ago and contains a string of nine craters in this stretch of the Andes, according to the Smithsonian's Global Volcanism Program. Its summit is just less than 3000 meters, or 9,830 feet, above sea level.

Mild to moderate eruptions have been recorded here since the 18th century, and some in the 20th century spewed volcanic rocks and chilled liquid sulfur fragments from its 300-meter wide crater lake, the Global Volcanism Program reports.

After at least three eruptions during the 1990s, Copahue's last significant eruption occurred from July to October 2000. That incident caused damage, mudslides and spurred evacuations.

Posted by seemorerocks at 21:38