Professor: Don't Be Surprised If There's A War Between Japan And China In The Next Year

Caught in a bind that threatens an Asian war nobody wants
Creative diplomacy is urgently needed for a face-saving solution. 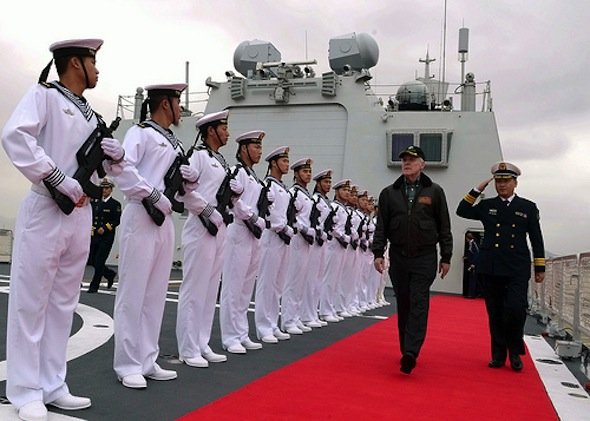 THIS is how wars usually start: with a steadily escalating stand-off over something intrinsically worthless. So don't be too surprised if the US and Japan go to war with China next year over the uninhabited rocks that Japan calls the Senkakus and China calls the Diaoyu islands. And don't assume the war would be contained and short.

Of course we should all hope that common sense prevails.

It seems almost laughably unthinkable that the world's three richest countries - two of them nuclear-armed - would go to war over something so trivial. But that is to confuse what starts a war with what causes it. The Greek historian Thucydides first explained the difference almost 2500 years ago. He wrote that the catastrophic Peloponnesian War started from a spat between Athens and one of Sparta's allies over a relatively insignificant dispute. But what caused the war was something much graver: the growing wealth and power of Athens, and the fear this caused in Sparta.

The analogy with Asia today is uncomfortably close and not at all reassuring. No one in 431BC really wanted a war, but when Athens threatened one of Sparta's allies over a disputed colony, the Spartans felt they had to intervene. They feared that to step back in the face of Athens' growing power would fatally compromise Sparta's position in the Greek world, and concede supremacy to Athens.

Advertisement
The Senkakus issue is likewise a symptom of tensions whose cause lies elsewhere, in China's growing challenge to America's long-standing leadership in Asia, and America's response. In the past few years China has become both markedly stronger and notably more assertive. America has countered with the strategic pivot to Asia. Now, China is pushing back against President Barack Obama's pivot by targeting Japan in the Senkakus.

The Japanese themselves genuinely fear that China will become even more overbearing as its strength grows, and they depend on America to protect them. But they also worry whether they can rely on Washington as China becomes more formidable. China's ratcheting pressure over the Senkakus strikes at both these anxieties.

The push and shove over the islands has been escalating for months. Just before Japan's recent election, China flew surveillance aircraft over the islands for the first time, and since the election both sides have reiterated their tough talk.

Where will it end? The risk is that, without a clear circuit-breaker, the escalation will continue until at some point shots are exchanged, and a spiral to war begins that no one can stop. Neither side could win such a war, and it would be devastating not just for them but for the rest of us.

No one wants this, but the crisis will not stop by itself. One side or other, or both, will have to take positive steps to break the cycle of action and reaction. This will be difficult, because any concession by either side would so easily be seen as a backdown, with huge domestic political costs and international implications.

It would therefore need real political strength and skill, which is in short supply all round - especially in Tokyo and Beijing, which both have new and untested leaders. And each side apparently hopes that they will not have to face this test, because they expect the other side will back down first.

Beijing apparently believes that if it keeps pushing, Washington will persuade Tokyo to make concessions over the disputed islands in order to avoid being dragged into a war with China, which would be a big win for them. Tokyo on the other hand fervently hopes that, faced with firm US support for Japan, China will have no choice but to back down.

And in Washington, too, most people seem to think China will back off. They argue that China needs America more than America needs China, and that Beijing will back down rather than risk a break with the US which would devastate China's economy.

Unfortunately, the Chinese seem to see things differently. They believe America will not risk a break with China because America's economy would suffer so much.

These mutual misconceptions carry the seeds of a terrible miscalculation, as each side underestimates how much is at stake for the other. For Japan, bowing to Chinese pressure would feel like acknowledging China's right to push them around, and accepting that America can't help them. For Washington, not supporting Tokyo would not only fatally damage the alliance with Japan, it would amount to an acknowledgment America is no longer Asia's leading power, and that the ''pivot'' is just posturing. And for Beijing, a backdown would mean that instead of proving its growing power, its foray into the Senkakus would simply have demonstrated America's continued primacy. So for all of them, the largest issues of power and status are at stake. These are exactly the kind of issues that great powers have often gone to war over.

So how do we all get out of this bind? Perhaps creative diplomacy can find a face-saving formula that defuses the situation by allowing each side to claim that it has given way less than the other. That would be wonderful. But it would still leave the deeper causes of the problem - China's growing power and the need to find a peaceful way to accommodate it - unresolved. That remains the greatest challenge.


Hugh White is professor of strategic studies at ANU and a visiting fellow at the Lowy Institute.