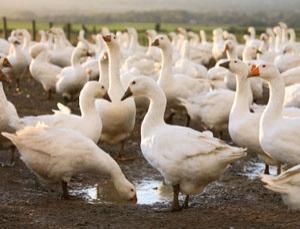 He says it's well known that the virus that causes foot and mouth disease in cattle and pigs travels many kilometres on the wind, but it's lighter than avian flu and is produced in huge amounts by infected animals. McCauley says the most likely scenario for bird flu is that the virus hitches a ride on airborne particles from farms, especially particles of infected faeces from poultry farms.
Posted by seemorerocks at 15:09