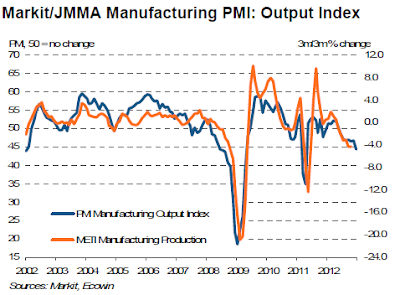 Latest data from Markit/JMMA indicated that the performance of the Japanese manufacturing sector continued to deteriorate in December. Output, new orders and employment all fell compared to one month ago while margins remained under pressure as output charges declined amid ongoing price competition.

After adjusting for seasonal factors, the headline Markit/JMMA Purchasing Managers’ Index™ (PMI™) registered a level of 45.0 in December. Down from 46.5, the PMI subsequently posted a 44-month low.

Output continued to decline markedly, with the sharpest contraction again seen in the capital goods producing sector. Total manufacturing production has now fallen for seven months in a row, with the latest reduction the sharpest seen since April 2011.

Falling volumes of incoming new business was the primary factor driving manufacturing output lower in December. As was the case with output, the fall in new order volumes was the steepest since April 2011, although the rate of decline was considerably sharper than seen for production.

New export order volumes also continued to fall in December, with companies reporting that demand from Chinese and European markets remained sluggish. The fall in orders from abroad was the steepest since July, with investment goods producers recording the steepest reduction.

Nearly every day someone sends me an email stating Japan's manufacturing and export machine will pick up with a falling yen.

Japan is in an economic war with China over disputed islands so that part of Japan's export business is dead, and will remain dead.

In isolation, a falling Yen will help Japanese exports to Europe. However, Europe is in a severe, as well as worsening recession, so a falling Yen alone will not revive sales.

In the US, car buyers are not as in love with Japanese cars as they once were, and the US has its own share of problems in a weakening if not outright recessionary economy.

Finally, a falling Yen will exacerbate Japan's energy problems as Japan is totally dependent on imports to meet its energy needs.

Japan wants inflation, but this is a strong case of "be careful of what you ask,
because you may get it". Inflation is likely to destroy Japan, the real question is "when".

For more on Japan, please see