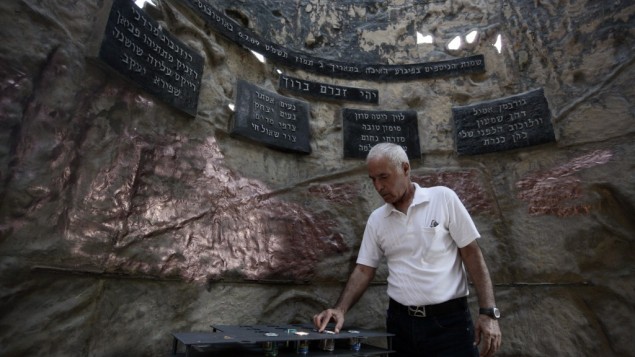 Piece by piece, thieves have made off with a large monument near Jerusalem dedicated to 16 people killed in a terror attack over 20 years ago.

Police say the monument to the victims of the Bus 405 attack was likely dismantled by metal thieves, lured by the 20 tons of iron and copper inside the 10-meter tall memorial.

Though likely carried out several days ago, the theft was only discovered on Wednesday.

In 1989, a Palestinian terrorist grabbed the steering wheel of a public bus traveling between Jerusalem and Tel Aviv, plunging it into a ravine outside the capital and killing 16 people on board. Twenty-seven more were injured, and the terrorist survived.

The monument was located at the site where the bus fell, between Neveh Ilan and Kiryat Ye’arim.

Uzi Zerafi, whose wife Miriam was killed in the attack, said there should be a national outcry over the theft.

“It took me right back to the tragedy,” he told Israel Hayom. “I don’t understand how somebody could do something so immoral.”

Posted by seemorerocks at 21:40