You have probably been thinking, since you are probably a reasonable person, that Hurricane Sandy served as a wake-up call to governments, as well as individuals and businesses, about the benefits of taking precautions against such events in the future which had until now been considered "Black Swans."

Your reasonable assumption, however, would be wrong in at least one critical arena: the utilities. Turns out that Con Ed and Co. have little incentive to invest in preventive measures; it's far cheaper - a hundred times, to be exact - to clean up after the fact.

For Con Ed after Hurricane Sandy, that means the difference between a 3% rate raise for three years and a 300% rate raise for ten years. (That's actually more than 100% but these figures come from the New York Times article on the topic.)

Not only that but also, the absurd fact remains that Congress has traditionally been willing to act only after a given disaster has taken place.

The Precautionary Principle prevails in parts of Europe but here, all assaults on the environment are innocent until proven guilty. 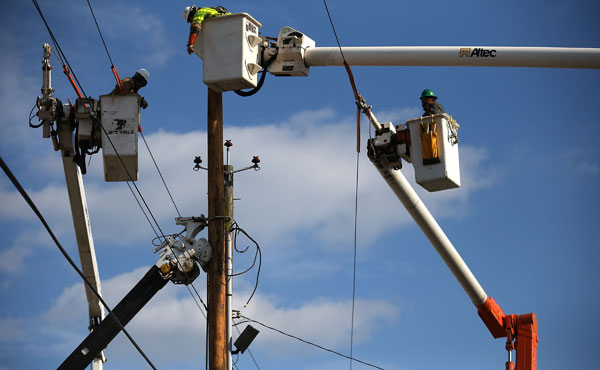 After Hurricane Sandy wreaked havoc with power systems in the Northeast, many consumers and public officials complained that the electric utilities had done far too little to protect their equipment from violent storms, which forecasters have warned could strike with increasing frequency.


But from a utility’s perspective, the cold hard math is this: it is typically far cheaper for the company, and its customers, to skip the prevention measures and just clean up the mess afterward.

Consolidated Edison, for example, expects to spend as much as $450 million to repair damages to its electric grid in and around New York City. Since utilities are generally allowed to recover their costs through electric rates, customer bills in the region, which typically run about $90 a month for residential customers, would have to rise by almost 3 percent for three years to cover those expenses alone.

Fully stormproofing the system — sinking power lines, elevating substations and otherwise hardening equipment against damage from torrential winds and widespread flooding — could easily cost 100 times as much. For Con Ed, carrying out just one measure — putting all of its electric lines underground — would cost around $40 billion, the company estimates. To recover those costs, electric rates would probably have to triple for a decade or more, according to Kevin Burke, Con Ed’s chief executive.

Avoiding such large investments is also appealing for another reason: the federal government has sometimes helped bail out utilities after catastrophes, like the Sept. 11 terror attacks and Hurricane Katrina. It may do so again this time in response to pleas from the governors of New York and New Jersey.

Still, there are signs that the devastation caused by Hurricane Sandy is upending the traditional cost-benefit calculations.

The Northeast has been hit by three big storms in just over a year, and forecasters say that so-called 100-year storms are likely to occur more frequently.

Utilities and policy makers can see that ocean surge poses a previously unexpected threat to the power grid.

And there is growing recognition that the true cost of disruptions, in terms of gasoline lines, lost workdays and business sales, and shivering homeowners, is far higher than the simple dollars and cents spent to protect the power system. A recent report from the National Academy of Sciences about the vast 2003 blackout in the Eastern United States determined that the economic cost of that disruption was about 50 times higher than the price of the actual electricity lost, and that didn’t take into account deaths or other human consequences.

“We need to think now of not just restoring the grid, but how to make it more survivable,” said Philip B. Jones, president of the National Association of Regulatory Utility Commissioners, a trade association of state officials. “I think most commissioners are coming around to that.”

After Gov. Chris Christie of New Jersey and Gov. Andrew M. Cuomo of New York traveled to Washington to lobby for aid, the Obama administration proposed a broad $60 billion recovery package, including several billion dollars that could be used to protect the utility infrastructure from storms.

“The governor decides if the utilities are deserving and eligible for getting some of that assistance,” said Kevin Lanahan, director of governmental relations at Con Ed. “But we’ve never had discussions on this scale, at least in the Northeast. So we’re not certain how that might go.”

Political leaders, who have traditionally pressed to keep consumer rates low, are also talking in New York, New Jersey, Connecticut and other states about raising rates — perhaps gradually over many years — to pay for improvements.

This year, after Maryland was hit by several storms, the state’s governor, Martin O’Malley, even took the unusual step of asking regulators to raise electric rates by a dollar or two a month to allow utilities to do more preventive work. Abigail R. Hopper, his chief energy adviser, compared the process to losing weight. “It might take you a while to get to your goal, but you start feeling better and better,” she said.

Ralph A. LaRossa, president and chief operating officer of the Public Service Electric & Gas Company, New Jersey’s largest utility with 2.2 million customers, said during hearings in Trenton that what the governor, legislators, utility regulators and the utilities “need to do is price out what the optimum solution would cost and do a cost-risk analysis — how much are we willing to pay for minimum risk, how much risk are we willing to live with? — and then come up with the best solution for the customers.”

He said that the utility’s costs for restoring service after Hurricane Sandy could run to $300 million. But utilities in the state are now considering whether to move some 32 electrical substations — critical relay points where power voltages are reduced for distribution to many homes and businesses — that sit in 100-year flood zones.

Another solution, he said, could be to build greater redundancy into the network. For example, P.S.E.& G. has bought land inland from Newark, where most residents lost power from storm surges during the hurricane, to build a new station that could continue to serve the city if older substations flooded.

Such public discussions of more prevention reflect a major change in thinking. Traditionally, utilities have focused largely on tree-trimming and sandbags to ease storm damage, and politicians and regulatory commissions have discouraged spending to protect against what seemed to be the long odds for catastrophic storms.

“It was pretty widely understood that things like subway tunnels and underground facilities, including substations and junction boxes, were all very vulnerable,” said M. Granger Morgan, director of the Center for Climate and Energy Decision Making at Carnegie Mellon University in Pittsburgh. “The difficulty is it’s a low-probability event, and they’re operating with pretty limited budgets.”

After a series of storms, including Hurricane Irene, hit New Jersey in 2011, public anger and regulatory oversight in that state focused mainly on poor communication by the utilities and their sluggish efforts to restore power.

Even if many consumers now agree that more prevention is needed, they will undoubtedly differ over how much they can afford to pay for it, and state rate commissions plan to hold hearings to weigh their views.

Paula M. Carmody, the Maryland state official who represents consumers before the public service commission, said the high costs of preventive measures raised fairness questions that until now have been mostly unexamined.

If the electric system’s reliability is judged to be “a societal issue,” she said, then the political system should consider using tax dollars. High-income people might be happy to pay extra on their bills to reduce the chance of blackouts, or might buy backyard generators, but poorer people may not be able to afford higher bills, she said; if the improvements are paid for through income taxes, the poor are not so burdened and universal access to electricity is maintained.

Under President Obama’s proposal to Congress, $2 billion would specifically be devoted to utility projects, while the governors in New Jersey, New York and Connecticut would also be able to apportion parts of more than $15 billion in other grants for that task.

Referring to that aid, which Congress must still approve, Jeanne M. Fox, a Democrat on the New Jersey Board of Public Utilities, said, “We’ll work with what we’ve got.”

“The more we can get from the federal government, the less our ratepayers will have to pay,” she said.