The Florida shooting - another false flag


Every time one of the shootings happens I am determined to not give it coverage on this blog but circumstances force me to rethink when there are so many strange things connected with the event – such as why, ONCE AGAIN, there was a drill at the school coinciding with the event. Why did some of the students talk about a second gunman. Once again the FBI was well acquainted with the alleged perpertrator. Were they too busy with “Russian collusion” to bother with a real crime? Were they involved

These are questions. I have no fixed posiion. All I can say is that it fits into a deteriorating political, economic and security situation in the US. 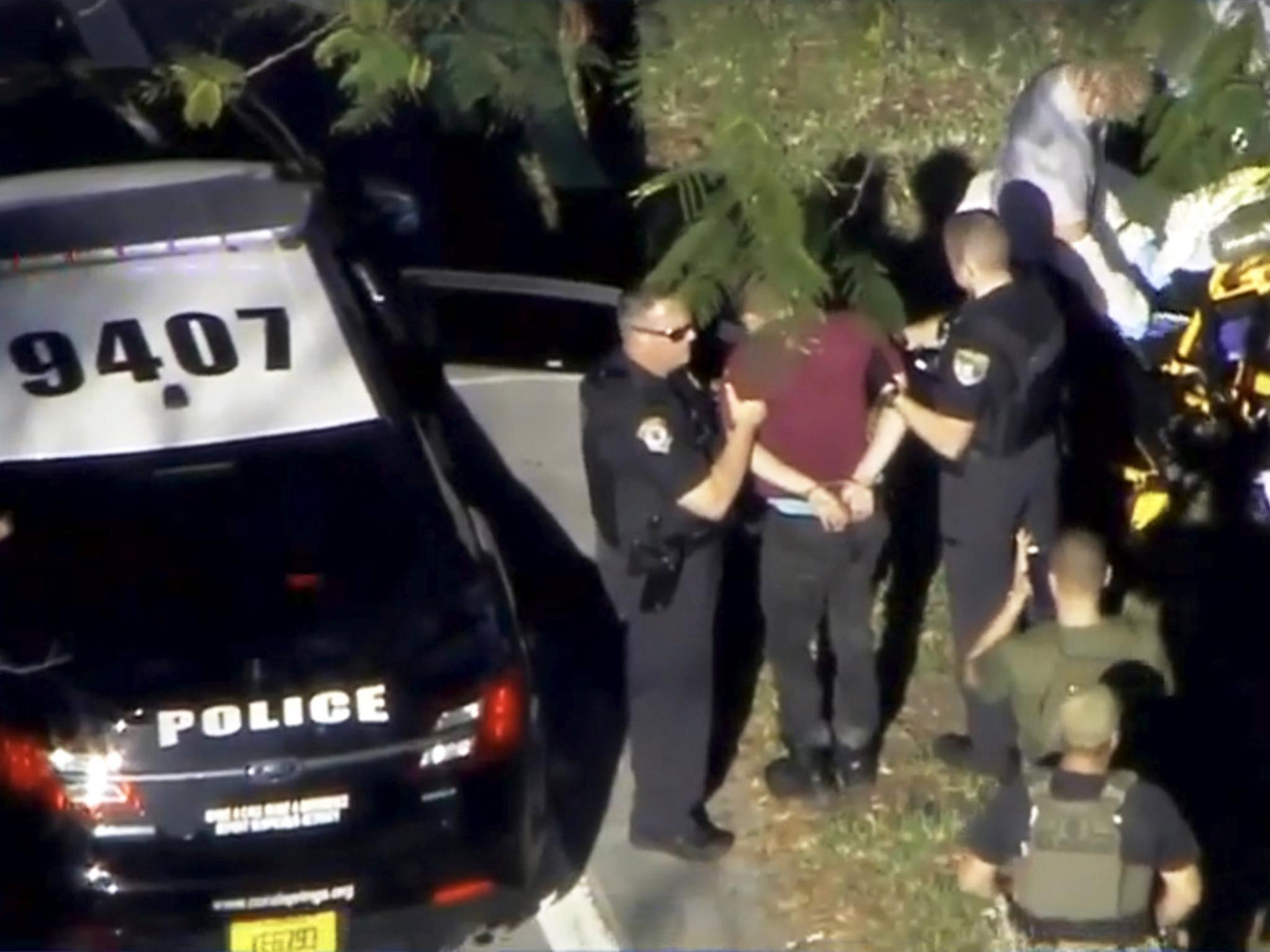 State of the Nation,

All the usual Democrats, who have attempted to gut the Second Amendment over many years, were tweeting the urgency to strip Americans of their right to bear arms while the crime scene was in the early stages of investigation.

State of the Nation PARKLAND, FL – FEBRUARY 14: People are brought out of the Marjory Stoneman Douglas High School after a shooting at the school that reportedly killed and injured multiple people on February 14, 2018 in Parkland, Florida. Numerous law enforcement officials continue to investigate the scene. (Photo by Joe Raedle/Getty Images)

FALSE FLAG PROOF:  The following MSM video indicates the accused shooter — Nikolas Cruz —  was talking to a female student in the hallway soon after shots rang out.  Right after they parted ways, she heard more shots.  Was he hiding his AR-15 in his back pocket?

VIDEO: Second Shooter Confirmed at Florida High School
Update: EYEWITNESS: At Least 3 Shooters at Florida High School Massacre, Army on Site During Shooting (Video)
Question: Why did the Palm Beach Post remove the reference to the Code Red active shooter drills performed last week?
Really, how suspicious is that?!  Calls for draconian G U N  C O N T R O L measures before all the shots are fired?
The Democrats are always looking to distract from their naked criminality associated with Russiagate, FISAgate, Dossiergate, Intelgate, Emailgate, Weinergate, etc.  The list of their treasonous scandals really does go on and on…and they know it.
What better way to divert the attention of the American people than to shoot up yet another high school…deep in dark blue country.
The Deep State criminal cabal responsible for all of these school shootings knows just when and where to carry them out to quickly change the national conversation.  And especially to change the subject from their most explosive and unparalleled crime spree known as FISAgate.[1]
RED ALERT: FISAgate Proves Deep State Will Do ANYTHING To Remove Trump
Of course, the whole fake Russiagate conspiracy will eventually be pinned on the entire Democratic leadership.  Bad actors in Congress (read: traitors to the American Republic) like Adam Schiff, Chuck Schumer, Nancy Pelosi, Maxine Waters, Diane Feinstein, Richard Blumenthal, Mark Warner, et al. all colluded in order to remove Trump from office based on an outrageous series of malicious lies.  Each of them knew that it was the Democratic Party that committed crimes of treason, not Trump.  And that it was not Russia, but the United Kingdom that fabricated the fake intel and false dossier. See: It wasn’t Russia that tried to fix the 2016 U.S. presidential election; it was the British. KEY POINT: That a high school was selected in President Trump’s own back yard in South Florida makes it very difficult for him to avoid the highly politicized parental backlash that is sure to manifest.  The Marjory Stoneman Douglas High School in Parkland, Florida is less than 40 miles south of Trump’s Mar-a-Lago luxury resort that functions as Trump’s Camp David.  How convenient for the perps to have shot up a school located in Broward County, perhaps the most ultra-liberal county south of the border.  Clearly, every single detail of this [SHOCKING] mass shooting was well thought out in advance in order to have maximum impact.  And so it has!  But not without serious blowback on the Deep State decision-makers.

The timing of the Florida high school shooting is too perfect not to be a false flag operation executed to deflect attention away from the Democrat’s unprecedented spate of serious scandals.  It was also designed to take away the guns — THIS YEAR — which the DEMs cannot do fast enough.  They know that at least half of the U.S. citizenry is onto their stealthy and surreptitious Purple Revolution.  And they can see the “torches and pitchforks” (and guns) slowly approaching their sanctuary cities.
BEWARE: The Purple Revolution Comes To America
As long as the patriots and conservative side of the body politic (i.e. the Right) are fully armed as many are, the Democrats really do have a LOT to worry about.  Hence, their concerns are not unfounded.  The serial lawbreakers — from the Obamas and Clintons on down — really do face existential threats.  The truth movement not only wants to “lock her up”, they want gallows for the whole lot of them.

Gun Control via Shock and Awe

Ever since Obama first took office there has been a steady stream of mass shootings right up to this very day.  In this manner, the behind-the-scenes perpetrators are constantly applying the “Chinese water torture” to the American consciousness.  With each successive school shooting, more parents are fearful about the plight of their children.  After all, you never know when and where the government’s next mind-controlled terrorist(s) will strike.
The globalists believe that it’s only a matter of WHEN a critical mass of citizens will rise up and demand the outlawing, and subsequent confiscation, of guns.  Any populace, no matter how aware they are of the true back story, would likely give into this tactic.  However, with the Internet running at full tilt 24/7, the ruling elites greatly underestimate the resolve of the patriot movement.
Yes, it’s quite evident that the liberal side of the political equation can be quite easily manipulated by this incessant fear-mongering.  As a matter of historical fact, the liberal, progressive, and left-wing members of the Democratic Party have been [FASTIDIOUSLY] socially engineered to give up their guns and take them away from everyone else.  These hard-core Cultural Marxists will not rest until this objective is accomplished for their Bolshevik masters.
However, the faithful Christians and conservatives, freedom-loving Libertarians and Tea partiers, no-nonsense Republicans and constitutionalists, etc. are an altogether different matter.  The NRA members, veterans, hunters, militiamen, police and other gun owners are particularly determined not to be disarmed.  And their numbers are growing by the day.  Therefore, the more TPTB resort to “shock and awe” via domestic terrorism, the more these horrific shootings will come back to bite the CIA-directed and FBI-protected co-conspirators. See: FBI WAS WARNED, FAILED TO ACT
KEY POINT: Everything Point To Nikolas Cruz Being Painstakingly Set Up By The Government…And Especially By The FBI

Screaming for gun control while the crime scene was still hot

How obvious was this false flag operation that so many Democrats all tweeted in unison the need for immediate gun control?
The following link contains a partial list of those Democratic politicians who were on Twitter while shots were practically still being fired.
RIGHT ON CUE: LIBERALS DEMAND GUN CONTROL AFTER FLORIDA SCHOOL SHOOTING
KEY POINT: That’s not to say that no one was shot and/or killed during this mass shooting.  Because of how scripted these false flag operations can be, it’s almost impossible to discern between what is real and what is hoax.  Because whether any part of this shooting was staged drama or as real as can be, it still serves to traumatize those involved…as well as the entire nation.  In this fashion the perps are creating a national epidemic of PTSD which can be triggered at will by the power elite.

That the alleged  gunman opted to use an “AR-15-style semiautomatic rifle and had multiple magazines” is a dead giveaway, as it is in virtually all of these school shootings.
If the Left, but especially the Washington establishment and international banking cartel, are afraid of any type of weapon on the street, it’s this type of assault rifle.  The NWO globalist cabal knows that any country, whose citizens are so armed, can never be effectively ruled by the dictatorship they strive to impose on the American Republic.

It’s of paramount importance for every U.S. citizen to understand that it was Obama who signed the latest version of the NDAA.  That unconstitutional and wholly illegitimate legislation conferred the illicit power upon the Executive Branch to stage false flag operations against We the People in order to address matters of heightened national security.  ‘Legalizing’ black ops like yesterday’s Parkland, FL massacre permits them to be utilized as psyops, which are key to the globalist’s fear-mongering NWO agenda.
“FALSE FLAGS” are LEGAL PROPAGANDA PRODUCED by the Department of Defense

The U.S. Federal Government does not possess the lawful authority to arrogate power unto itself to indiscriminately injure, wound, maim, paralyze, incapacitate or kill American citizens.  Case closed!
Ergo, the government has irreparably broken the social contract and violated the public trust that once existed.  Likewise, the sacred covenant between the governed and the government — unequivocally established by the U.S. Constitution and Bill of Rights — has been irreversibly voided.
Donald Trump sailed into office on the aspirations of the patriot movement.  The patriots demanded that he take back the country from those who stole it.  The US government has been held hostage since 1913, but now the hostages are being killed Right and Left.

There is now ONE response, above all others, that is necessary to short-circuit this rapidly deteriorating state of affairs.  The good news is that Deep State is totally defenseless against the Higher Power.  Time for the American people to bring it on.