More lies from the Guardian

"The western mainstream media now appears to be backing up their own stories using their own previous stories as evidence. They also seem to be prepared to alter those stories in one way or another to fit the new narrative"
https://bryanhemming.wordpress.com/2014/11/13/shaun-walker-is-caught-invading-ukraine-by-his-own-camera/

Last week the Guardian published an article, Russia shelled Ukrainians from within its own territory, says study, quoting the work of Shaun Walker, published in Bellingcat (which prove to be one and the same. This has been dissected by an article  by Eric Draitser of stopimperialism.com.

Bryan Hemming writes about this in his blog HERE

The Guardian manipulates its 'evidence'

Here is the text of a VERY interesting email I received in response to my recent article "There Goes the Guardian, Lying About Ukraine...Again!". I am reproducing the email in its entirety with the consent of the author Bryan Hemming whose blog can be found at bryanhemming.wordpress.com.

Having read your latest article in counterpunch, I thought you might be interested to read my own little piece of armchair research into Bellingcat, published on my blog last September 10th, where I did a bit of digging into its funding: 'MH17 - Brazen censorship by The Independent.' 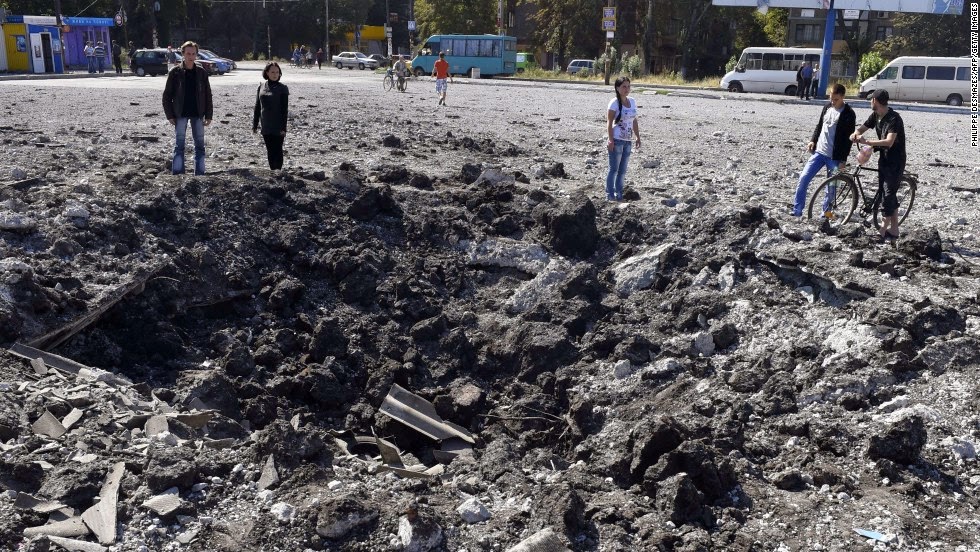 As for Shaun Walker, The Guardian archives appear to have been tampered with since you last looked. In There's Goes The Guardian Lying AboutUkraine...Again! you mention a Guardian article Russian military vehicles crossing the border into Ukraine by Shaun Walker published on August 15th 2014 where he claims to have witnessed a Russian armoured convoy crossing the border into Ukraine.

You say: “There is only the word of The Guardian’s reporter Shaun Walker, who conveniently could not get a photograph or video of the alleged military vehicles crossing into Ukraine.” As you correctly point out, the original article did not contain a photo of the convoy Walker claims to have seen. Yet, magically now it does. And Shaun Walker is given the credit for having snapped it. There is something a little disturbing about that claim, as to judge from the photo he would've had to have been driving one of the armoured vehicles in the convoy, or riding in it. Yet according to Roland Oliphant of The Telegraph, he and Walker had spotted a Russian armoured convoy driving through a hole in the fence, which separates Russia from Ukraine, at the dead of night.

I know very well the original didn’t include the photo because I happen to have posted an article dealing with that very point on my blog. Shaun 'wish I'd brought my camera' Walker was published on August 17th 2014, the date can be verified from wordpress site records. Not only has the Walker article been tampered with but so has the headline. Now posted as Aid convoy stops short of border asRussian military vehicles enter Ukraine (the link is exactly the same as it is in my original article) it does contain a photo of a convoy, credited to Shaun Walker. Yet that photo did not appear in a Guardian article until November 12th 2014, when it accompanied a different article by Shaun Walker under the headline Russian tanks and troopscrossing into Ukraine, says Nato commander. The photo of the convoy Walker claims to have witnessed, and was previously in the article, has been replaced by a video.

By removing the photo from the November 12th article to insert it into the August 15th article The Guardian brazenly attempts to give the August article credibilty it didn’t formerly possess, as Walker didn’t produce one shred of evidence to back his claim at the time. I know the photo wasn’t there because I wrote another article about it called Shaun Walker is caught invading Ukraine by his own camera, which I posted on November 13th 2014.

This manipulation of the article by the placing of a photo which was not there previously is an exercise in deception. It demonstrates that The Guardian is content to alter evidence on extremely serious matters that threaten world peace and security. 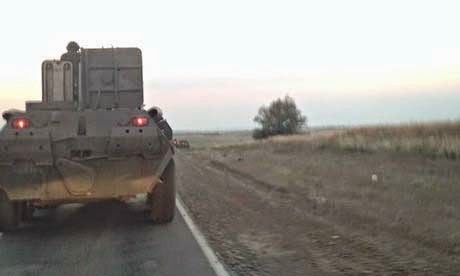 Oliphant and Walker spot a Russian convoy at the ‘dead of night’? Photo: Shaun Walker
Were they part of the convoy?

Meanwhile, while the rest of the media (including the BBC) is just publishing the facts, the Guardian knows whodunnit – or quotes the Ukrainian SBU uncritically.

Imagine them quoting the FSB?

"Markian Lubkivskyi, an aide to the head of Ukraine’s SBU security service, said four suspects had been arrested.

“They are Ukrainian citizens, who underwent instruction and received weapons in the Russian Federation, in Belgorod,” he told Ukraine’s 112 Television. Belgorod is a Russian city just across the border from Kharkiv.