The thieves make common cause 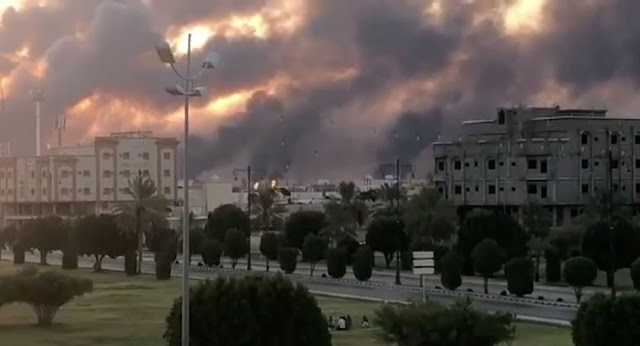 On 14 September, two drones attacked Saudi Aramco oil facilities, leading to a major fire and partially disrupting oil production. The attack was claimed by Yemen's Houthi faction, but Washington has put the blame on Iran.

"The time has come for Iran to accept a long term negotiation framework for its nuclear program, as well as regional security issues, which include its missile programs", the three governments said in a joint statement.
"We condemn with the utmost firmness the attacks that targeted oil sites on Saudi territory, on September 14, 2019 in Abqaiq and Khurais, and reaffirm our full solidarity with the Kingdom of Saudi Arabia and its people [...] It is clear to us that Iran is responsible for this attack. There is no other plausible explanation. We support the ongoing investigations for full details", the joint statement, released by France on Monday, reads.
French Foreign Minister Jean-Yves Le Drian said earlier that France, the UK and Germany will also discuss the situation around the Iranian JCPOA nuclear deal at the upcoming UN General Assembly in New York.
Last week, the Saudi Defence Ministry held a press conference to present what it described as evidence of Iran's involvement in the attacks. Tehran has refuted the accusations.
According to recent reports, the full restoration of Saudi Aramco's oil operations after the attacks may take months. The attack resulted in more than a twofold drop in Saudi Arabia's daily oil output and caused a surge of oil prices.

Iranian President Hassan Rouhani said Monday that Washington seeks to use the recent drone attack on Saudi Aramco oil facilities to its advantage by striking billion-dollar deals and attaining a permanent presence in the Middle East.

On Friday, the Saudi-led coalition launched an operation against military facilities said to belong to Shia Houthi rebels in the northern part of the Yemeni province of Al Hudaydah, less than a week after the drone attack. 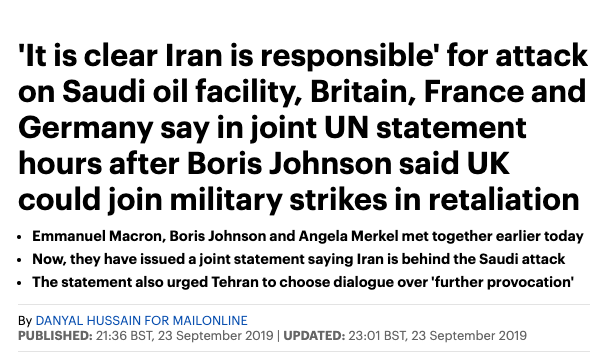 
"Locked and loaded". Will
MBS order US to go to war
with Iran? 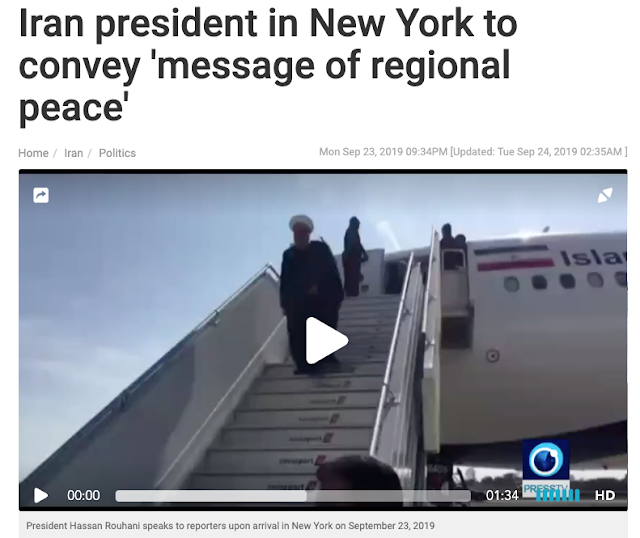 Iranian President Hassan Rouhani has arrived in New York to attend the 74th meeting of the UN General Assembly, where he plans to convey the message of Middle East peace to the world.

"We hope in the very sensitive situation of the region today we would be able to convey the message of our regional nations, which is the message of regional peace and end of any interference in the sensitive regions of Persian Gulf and the Middle East," Rouhani said upon arrival in New York on Monday.

He said he is also carrying the "message of the great nation of Iran, which is under the pressure of a cruel economic war."

"Our nation is a nation of resistance, perseverance, and wants all sides to return to their commitments and to the law," he noted, expressing the hope that he would be able to convey the Iranian nation's message to the international community at the UN General Assembly.


Before leaving for New York, Rouhani told reporters at Tehran's Mehrabad Airport that the peace initiative that he will soon unveil at the United Nations General Assembly is aimed at establishing long-term peace in the Persian Gulf, something he said is simply not achievable as long as outsiders are present.
https://www.presstv.com/Detail/2019/09/23/606960/Rouhani-newyork-hope-initiative-hormuz-peace
Posted by seemorerocks at 14:23