Greta Thunberg at the United Nations

There are NO good players amongst political leaders

I reject totally and utterly this headline. 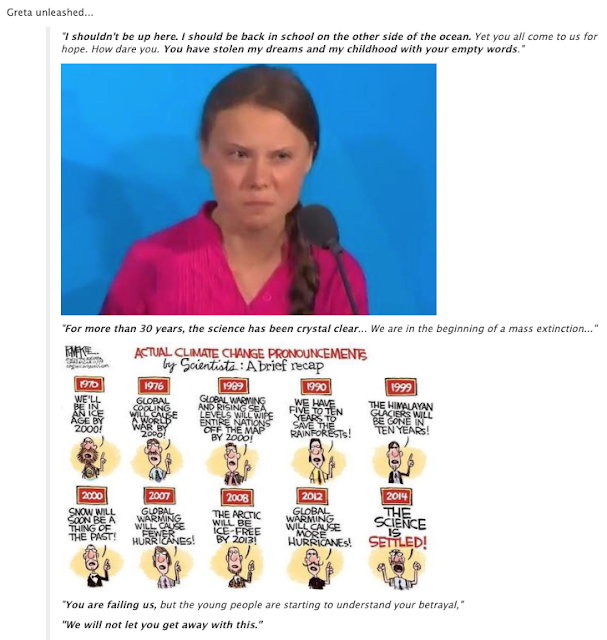 This is actually what she said

Greta Thunberg: ‘The People in Power Refuse to Listen… We Will Make Them Hear Us’

A dispatch from New York, where young climate strikers are planning a revolution they say world leaders can’t ignore. 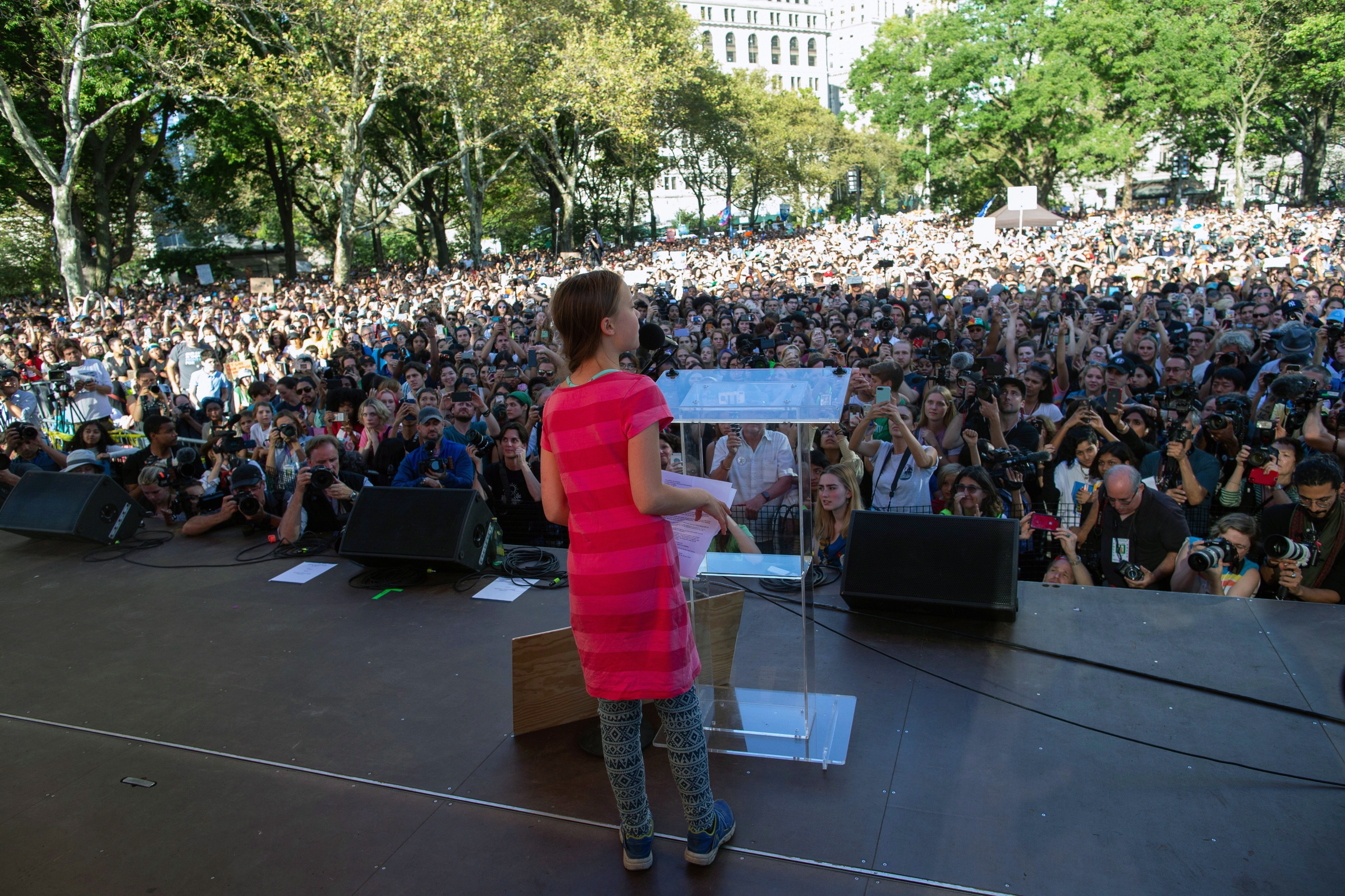 The millions of young people who skipped school on Friday to protest the failure of world leaders to fix the climate emergency had a message for politicians like Justin Trudeau — prove that you actually care about an entire generation’s future or else suffer the consequences.

“What’s the point in educating ourselves and learning the facts when the people in power refuse to listen, to be educated, and pay attention to the facts,” I heard Greta Thunberg tell a crowd in New York’s Battery Park that organizers of the Global Climate Strikes at one point estimated at250,000 people. “Everywhere I have been the situation is more or less the same, the people in power who write beautiful words are the same, the number of politicians and celebrities who want to take selfies are the same, and the promises are the same and the lies are the same.”
Thunberg earlier this month travelled to New York on a zero-emissions boat. Several days earlier she told U.S. congressmembers that “this is the time to wake-up.” The 16-year-old climate change icon from Sweden said the leaders gathering next Monday for a UN emergency meeting on climate change ignore young people at their peril.
“Do you think they will hear us?” she asked the crowd of schoolchildren, teens and their adult allies. “We will make them hear us.”
Trudeau could easily fit the cynical description of politicians offered by Thunberg. In June, the Liberal government passed a motion declaring that we are in a climate emergency, deeming the warming that’s affecting Canada two times as fast as the rest of the world a “real and urgent crisis.” It then approved the Kinder Morgan Trans Mountain oil sands pipeline the very next day.

Join us and grow independent media in Canada
Conservative leader Andrew Scheer would likely also qualify for putting forward a climate plan that includes no actual commitments or targets for reducing emissions. Then again, so might NDP leader Jagmeet Singh and Green party leader Elizabeth May, some observers argue, for failing to call out the fossil fuel industry with the forcefulness required.
The hundreds of thousands of youth who marched in New York, as well as the millions more in 150 cities around the world (including hundreds of people in Vancouver), are sick of politicians lying to them.
The homemade signs in New York offered a glimpse into the anxiety young people feel about the climate emergency, as well as their desire for radical change to avert it: “Don’t let Gen Z be the end”, “The Earth is on fucking fire”, “Will there be a happy ending?”, “Stop the burning”, “We have every reason to worry.”
At one point I saw a young girl carrying a sign that said, “What if we held billionaires accountable for the massive amount of pollution they cause.” Climate strikers are fed up with those in power publicly telling them soothing tales about innovation and progress while making deals with corporations behind closed doors to maintain the status quo. “Stop sugar-coating global warming,” read one teenager’s sign. Nearby, a girl who couldn’t have been older than 10 marched solemnly with a sign that read: “We are all literally going to fucking die.”


Varshini Prakash told an earlier gathering in Manhattan’s Foley Square it’s no coincidence that young people around the world are feeling panic-stricken and isolated about an emergency that threatens the natural systems upon which human civilization depends.
“We’ve grown up seeing the political establishment fail us, and for twice as long as I have been alive on this planet we have known about the crisis,” said the co-founder and executive director of the Sunrise Movement, which has worked with Canadian author Naomi Klein, progressive superstar Alexandria Ocasio-Cortez and others to push for an economy-transforming Green New Deal. “The wealthy and the powerful have profited off of pollution, have lied to millions of people about the science, have choked our democracy with their big oil dollars and stolen our futures.”
Prakash’s voice became angrier and more intense. She clenched the mic. “Today, this generation is taking over,” she declared. “Our days of waiting for action, our days of waiting to be heard are over.”
She acknowledged that though the climate strikes were a good start, there is a long road ahead: “We’ve got to be honest with each-other, if we want to survive, if we want to win, there are not enough of us here yet… we have to bring society and our economy to a standstill, politicians are going to have to know that they are going to win or lose based on where they stand on this issue.” 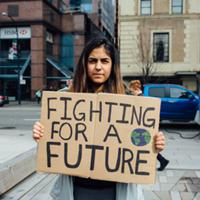 ‘We Know We Are at a Crossroads’: Youth on Strike for the Climate

READ MORE
Canada provided a case study of that in 2015, when young voters fed up with Stephen Harper running the country like a petro-state turned up in above-average numbers and elected Trudeau as prime minister. Though Gen Z and millennials are now the largest voting bloc in the country, it’s unclear if they’ll show similar enthusiasm for Trudeau in the October election, especially given that polling suggests two-thirds of 18-29 year-olds think the current federal government is doing too little to fight climate change, the highest of any age group.
“We deserve a safe future, we demand a safe future, is that really too much to ask?” Thunberg said. “If no one else will take action, then we will. It should not be that way, we should not be the ones who are fighting for the future, and yet here we are.”
She had a clear warning for political leaders who stand in the way: “We are not just some young people skipping school or some adults who are not going to work, we are a wave of change. We are unstoppable.”


The crowd raptly listened to every word. “We will rise to the challenge,” Thunberg said. “We will hold those responsible for this crisis accountable and will make the world leaders act. We can and we will.” The teens around me roared with approval.

I reject the liberal media and the way in which they have exploited this for an agenda that has little to do with Greta and young people like her. 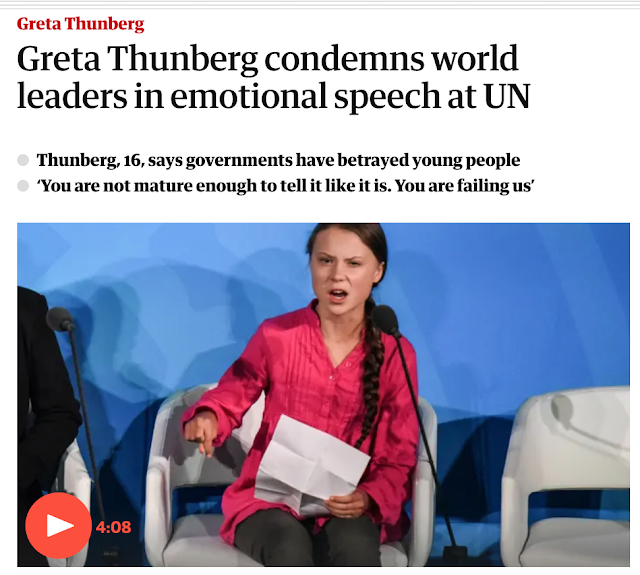 https://www.theguardian.com/environment/2019/sep/23/greta-thunberg-speech-un-2019-address?fbclid=IwAR2U0xLBlp7JG3gUtzoj0_4qgr4k-mSSZaxLP-Q8GlDoJFwnqB09u2OOJXo
Posted by seemorerocks at 14:01