Trump: US 'locked and loaded depending on verification'


Trump: US 'locked and
loaded depending on
verification' of attack on
Saudi oil field 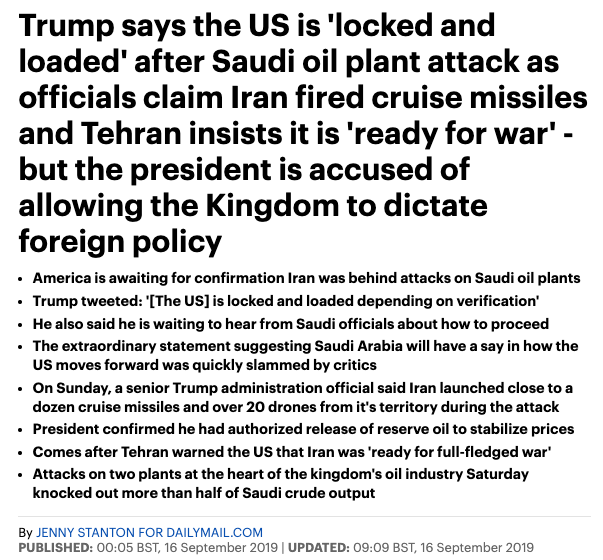 Donald Trump says America is 'locked and loaded' as it waits for confirmation Iran was behind drone attacks on Saudi oil plants on Saturday, after Tehran warned America it was 'ready for full-fledged war'.

The President tweeted on Sunday night: 'Saudi Arabia oil supply was attacked. There is reason to believe that we know the culprit, are locked and loaded depending on verification, but are waiting to hear from the Kingdom as to who they believe was the cause of this attack, and under what terms we would proceed!'

The extraordinary statement suggesting Saudi Arabia will have a say in how the US moves forward was quickly slammed by critics, including presidential hopeful Beto O'Rourke, who tweeted: 'As President I will not go to war for Saudi Arabia, nor will I let Saudi Arabia dictate our foreign policy.'


And on Sunday night a senior Trump administration official told ABC News Iran actually launched close to a dozen cruise missiles and more than 20 drones from its territory during the attack on Saturday.