This is what is being said - for the market, I suspect. 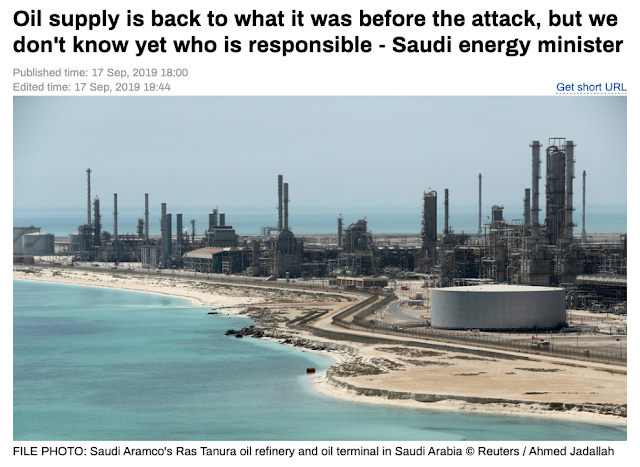 Saudi Arabia’s energy minister said that its oil supplies had resumed and that its oil market would be “fully back online” by the end of September following attacks which Washington blames on Iran while Riyadh is still probing.

Minister Prince Abdulaziz bin Salman told the media that oil production in October would reach 9.89 million barrels per day and 12 million bpd by the end of November.

"We are asking the world to help us to help secure oil," he said, adding that Riyadh expect no decline in oil exports and "no oil cargoes were canceled."

He also said Riyadh did not yet know who was responsible for the attacks, though Washington has pointed the finger at Tehran.

Iran has denied involvement in the attacks and Houthi rebels in Yemen have taken responsibility, warning that more could be forthcoming.
https://www.rt.com/news/469019-saudi-oil-back-attack/?fbclid=IwAR0MNtDetiLnU1lbUe2aulpc_yJKt5lyXeTZvpFkwRk-1Xznr3Tvvbl64Zg

But (more accurately) this is what Russian media is saying

Accidents like the drone attack on the oil infrastructure of Saudi Arabia don't contribute to the stability of the energy market, Vladimir Putin's press secretary told the newspaper Vedomosti.

According to Dmitry Peskov, the Russian president is aware of the attacks, but Riyadh didn't turn to our country for help.

WASHINGTON/RIYADH – The “sole” superpower’s entire global strategy has just been sent to the dustbin of history. And it was done in the most trivial way possible. Relatively simple ultra-low-speed drones soundly defeated America’s premier air defense system. Billions of dollars Saudi Arabia spent on US air defense systems have been turned into a heap of worthless scrap metal. And it was done by people who have been bombed and starved to death in the last half a decade. Saudi Arabia, with its $82.9 billion military budget, surpassed only by that of US and China, and ahead of such giants like Russia and India, has been getting pounded by Houthis.


Of course, Iran was the first to be blamed for the attack. The Russian MFA urged Saudis and Americans not to make premature conclusions without a thorough investigation, not to hold anyone responsible in advance, and especially not to use any “adverse news” from the Middle East to put pressure on Tehran. Presidential Press Secretary Dmitry Peskov shares this point of view. At the same time, there’s fresh news from American media referring to some sources in the Pentagon. They say that the lack of facts didn’t prevent the U.S. from planning a full-fledged military operation against the Islamic republic