The Curse Of Cassandra. 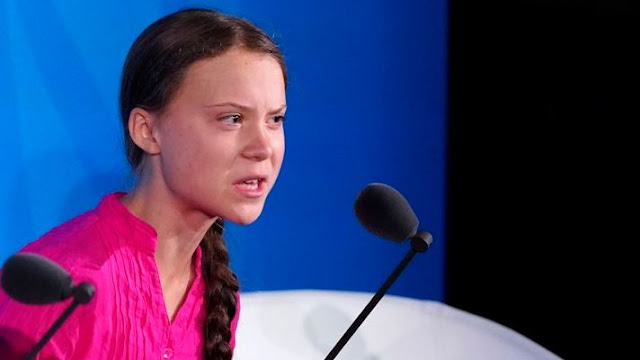 Unheeded: What god has Greta Thunberg offended, I wonder, to be afforded so many opportunities to deliver so many chilling warnings of climate catastrophe to so many world leaders – to so little effect? Like the Trojan seeress, Cassandra, she looks into the future and sees the ruin that awaits her generation, bears witness fearlessly to the truth, and is viciously derided for her trouble.


IT WAS CASSANDRA’S divinely administered curse: to see the future – but not to be believed. To secure the daughter of the King of Troy’s affections, the god Apollo bestowed upon her the gift of prophecy. When Cassandra, unsecured, refused his amorous advances, the angry god spat into her mouth: corrupting his own gift and sealing the princess’s fate.

Poor Cassandra, when the people of Troy, delirious at their “victory” over the Greeks, hauled within the city walls the mighty wooden horse left behind by their erstwhile besiegers as a “gift”, the seeress ran at it with axe and fire. The angry Trojans restrained Cassandra – calling her mad. The Greek warriors hidden in the horse’s belly, fated to kindle the proud towers of Ilium, were spared.

What god has Greta Thunberg offended, I wonder, to be afforded so many opportunities to deliver so many chilling warnings of climate catastrophe to so many world leaders – to so little effect? Like the Trojan seeress, she looks into the future and sees the ruin that awaits her generation – and bears witness fearlessly to the truth.

Oh how she speaks! Sometimes with the cold detachment of the judge who looks down upon the convicted killer in the dock, conscious only of her duty to pass the sentence mandated by Mother Nature’s, immutable laws.

On other occasions, such as her speech to the Climate Summit in New York on Tuesday morning, Greta’s ice is mixed with fire. The pig-tailed 16-year-old’s voice trembles with emotions that threaten to overthrow her at any moment. Somehow, she regains control of herself, of her voice. Enough to pronounce her crushing judgement upon the generation who, by their obdurate inaction, have stolen their children’s future.

“We will never forgive you!”

Greta Thunberg is not the only player in the Climate Change tragedy upon whom has been laid the dreadful burden of Cassandra. Apollo has also spat into the mouths of the scientists.

All over the world they have laboured to collect the data. New Zealand scientist, Dave Lowe, started recording the slow but steady rise in atmospheric carbon dioxide as far back as 1973. For more than forty years these men and women of Science have watched the evidence accumulate. Knowing that the possibility of their being in error was getting smaller and smaller with every paper that was presented, every report that was published.

They have peered into the future. They know what lies ahead. The melting ice caps; the rising seas; the deadly storms. The Four Horsemen of the Apocalypse: Famine, Pestilence, War and Death have all acknowledged their foresight with a studied nod of their terrifying heads. The scientists, too, have cried out a warning but, like Cassandra – and Greta – they have not been heeded.

Poor Greta. On Tuesday morning she told the assembled leaders of the world’s nations:

“You say you hear us and that you understand the urgency. But no matter how sad and angry I am, I do not want to believe that, because if you really understood the situation and still kept on failing to act, then you would be evil and that I refuse to believe.”

No, not evil, Greta. Say rather that we are enchanted. We can hear you but we cannot act. In the fairy tales you invoked so angrily in your speech, characters rendered so unaccountably immobile would be said to be “spellbound”.

What sort of spell could possibly be powerful enough to bind the whole of humanity: commoners as well as kings? To that question Greta’s speech also contained an answer:

“People are suffering. People are dying and dying ecosystems are collapsing. We are in the beginning of a mass extinction, and all you can talk about is the money and fairy tales of eternal economic growth”.

Ah, yes – the money. And more than the money. The dream of wealth without consequences; power without restraint. That is the spell, Greta. That has always been the spell. And we cannot break it.

The Pulitzer Prize-winning American poet, Edward Arlington Robinson (1869-1935) was also captivated by the legend of Cassandra. In his eponymous poem he writes:

The power is yours, but not the sight;
You see not upon what you tread;
You have the ages for your guide,
But not the wisdom to be led.

Certainly not by a 16-year-old schoolgirl.

THE GRETA THUNBERG
PROBLEM, so many men
freaking out about the tiny
Swedish climate demon


First Dog on the Moon 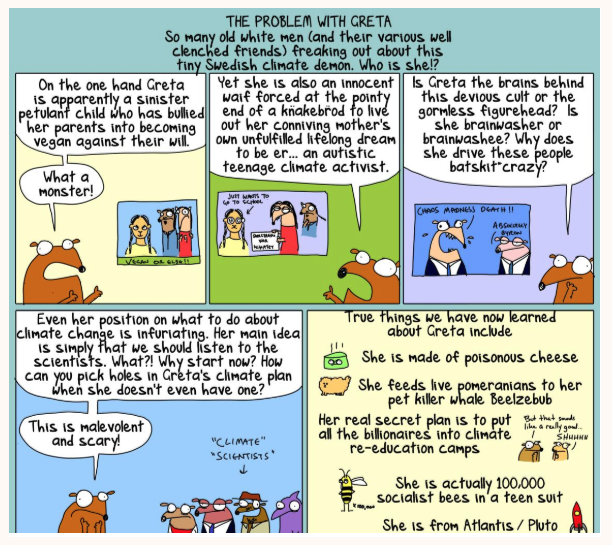