The effect of sudden stratospheric warming on Australia

Australia ‘on brink’ of The Arctic is on fire. Now, Antarctica is suddenly experiencing a heatwave. And that means a looming rainfall apocalypse for Australia.

According to a recent report by senior researchers from the Australian Bureau of Meteorology, we're in for higher than normal spring temperatures. And less rain.

It's all because of record warm temperatures in the air swirling above Antarctica.

It's producing a domino effect.
The stratospheric "polar vortex" has been disrupted. It could even reverse direction.
It's pushing stormy Southern Ocean wind streams over Tasmania, New Zealand's South Island and South America's Patagonia. This is away from its regular route over the Australian mainland.
And that means NSW and southern Queensland - already in parts devastated by bushfires so early in the season - are set to face worsening conditions and an even more catastrophic bushfire season. 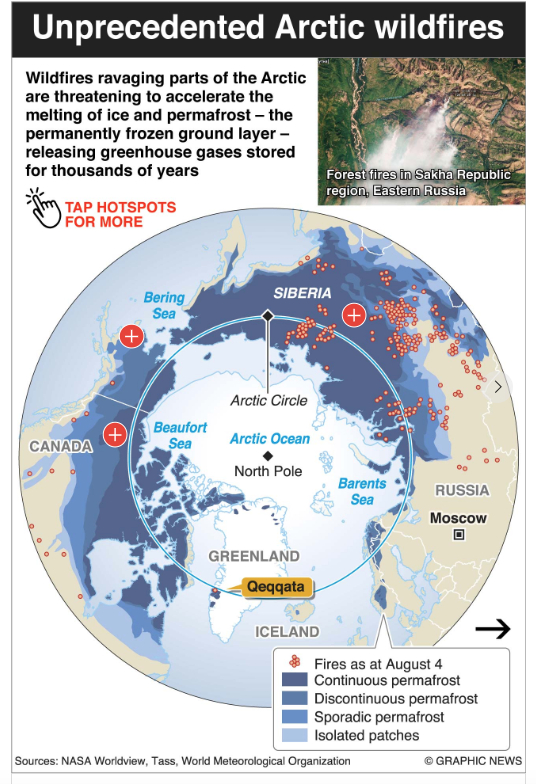 SUDDEN STRATOSPHERIC WARMING
"The warming began in the last week of August when temperatures in the stratosphere high above the South Pole began rapidly heating," the article published in The Conversation reads. Four senior Bureau of Meteorology forecasters compiled it.
"Thanks to improvements in modelling and the Bureau's new supercomputer, these types of events can be forecast better than ever before."
It foresees a looming stronger-than-usual melt of sea ice.
It foresees a shift in the typical wind temperatures and patterns coming off the Antarctic continent.
"In the coming weeks the warming is forecast to intensify, and its effects will extend downward to earth's surface, affecting much of eastern Australia over the coming months," the forecasters warn.
It is likely to be the most severe Antarctic warming event on record.
The previous highest Antarctic air temperatures were in September 2002. These resulted in Australia's fourth driest winter on record, with spring-autumn mean-maximum temperatures the highest "by considerable margins". 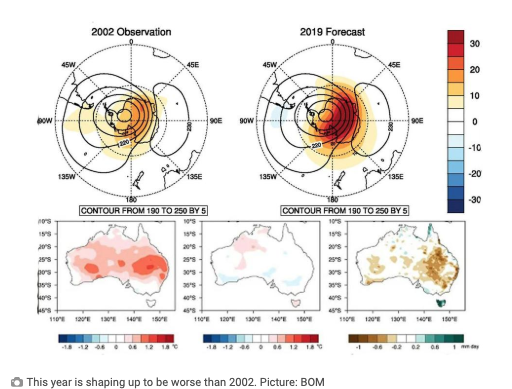 This year is shaping up to be worse than 2002. Picture: BOM

This year has been unprecedented in the northern hemisphere.
Wildfires have swept through the Arctic, burning large swathes of Canada, Norway, Sweden and Siberian Russia.
These are regions packed full of fuel - from dense forests through to ancient peat bogs.
Usually, it doesn't burn because it's frozen or wet.
But year after year of warming temperatures have dried out growing patches.
"The north is a big tinderbox, but it's been limited from burning by the climate," Merritt Turetsky at the University of Guelph in Canada told New Scientist. "If you remove those climatic constraints, all those fuels are ready to go."
And it's adding to a warming feedback loop. Fires are killing the vegetation. That exposes the permafrost below to the sun's heat. And that releases the carbon dioxide and methane within.
Both gases then serve to trap even more heat in the atmosphere, further accelerating the feedback loop.

Antarctica has no such forests. But the extent of its sea ice determines the temperature and course of ocean currents and winds. As the ice retreats, those long-establish flows weaken and shift.
"It is abundantly clear that climate disruption is happening now and everywhere," UN Secretary-General Antonio Guterres warned earlier this month. "Every week brings us news of more climate-related devastation. And climate impacts are only going to increase in severity and frequency."

The Antarctic is the engine room of the southern hemisphere's climate.
Every winter, westerly winds begin to swirl at speeds of up to 200km/h high above the South Pole.
The mechanics are relatively simple.
It's cold above the pole, which is experiencing months of darkness. But the Southern Ocean is still being warmed by the sun.
And, as the sun begins its southward march with the onset of spring, the polar vortex is gradually weakened.
"However, in some years this breakdown can happen faster than usual," the meteorologists write.
In such instances, unusually hot air intrudes over Antarctica - disrupting the temperature mix producing the high-speed westerly winds.
"Very rarely, if the waves are strong enough they can rapidly break down the polar vortex, actually reversing the direction of the winds so they become easterly," the article continues.

The only time this has been seen to happen was September 2002.
It's on the brink of happening again.
"Impacts from this stratospheric warming are likely to reach earth's surface in the next month and possibly extend through to January," the meteorologists warn.
And that means even less rainfall for much of southern and Central Australia.
With it will come clearer skies and higher temperatures.
"Past stratospheric warming events and associated wind changes have had their strongest effects in NSW and southern Queensland, where springtime temperatures increased, rainfall decreased, and heatwaves and fire risk rose," they say.
This compounds an already disastrous winter for New South Wales and much of Queensland. There, soil moisture levels actually decreased over what should have been their wet season.
So spring - and summer - will be starting from an already devastatingly dry low.
Jamie Seidel is a freelance writer. Continue the conversation @JamieSeidel 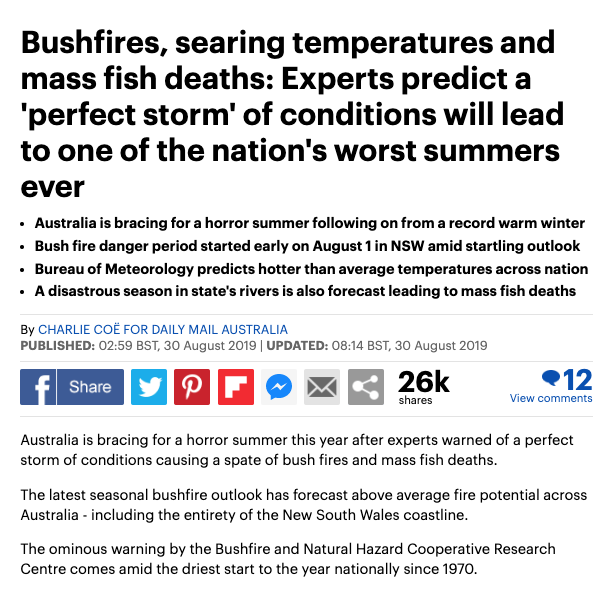 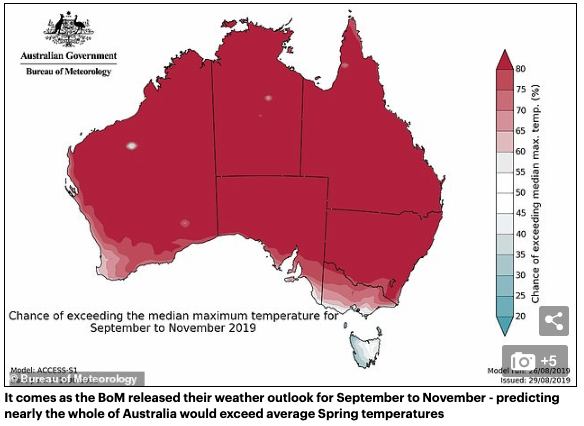 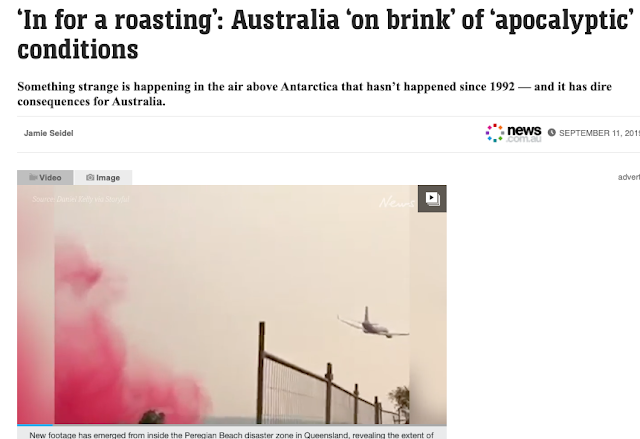 https://www.news.com.au/technology/environment/climate-change/in-for-a-roasting-australia-on-brink-of-apocalyptic-conditions/news-story/73d731e4a07f6b9c39b18897faa0e085?fbclid=IwAR1dpJ31Xmj_wClXJ3h5Fz0tOcpBQgmhjj9ruKGfD204iMD4JHRvew1dxcE
Posted by seemorerocks at 13:52