Bibi on the way out? The Israeli elections


Crazy Sara: Is Trump Distancing Himself From Netanyahu at Behest of Sheldon Adelson?

TruNews
Today on TruNews we discuss the Sheldon-Netanyahu schism which may have ended King Bibi’s reign, including the accusations of blood sucking over dinner and crazed calls by deposed Israeli First Lady Sara Netanyahu to billionaire heiress Miriam Adelson. We also detail the latest in the country’s elections including who may show up to represent zion at this year’s U.N. General Assembly. Rick Wiles, Doc Burkhart, Edward Szall. Airdate 9/19/1 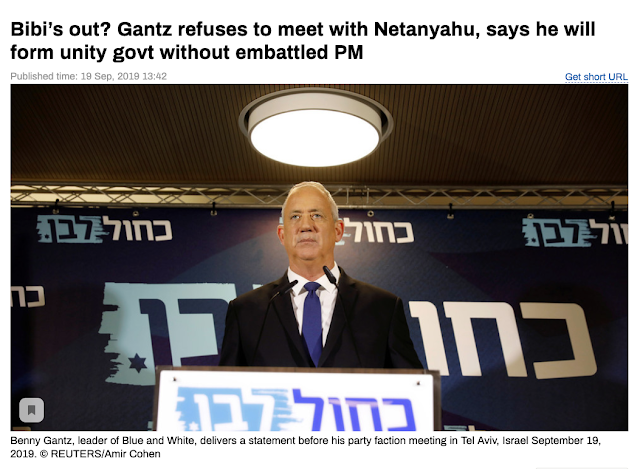 Benny Gantz, whose centrist bloc narrowly defeated Benjamin Netanyahu’s Likud party in a snap election, says he is forming a government that will exclude the current prime minister – signaling the end of Bibi’s era may be near.

The ex-IDF chief said on Thursday that he would not accept Netanyahu’s offer to discuss a unity government, keeping good on his campaign pledge to create a ruling coalition that does not include Bibi.


“I am interested and intend to form a broad and liberal unity government led by me,” he wrote in a tweet.

Speaking with reports, Gantz stressed that his Blue and White alliance “will listen to everyone, but we will not accept mandates imposed on us” – an apparent swipe at Netanyahu’s insistence that the pair should meet.

Blue and White won 33 seats in the Knesset in Tuesday’s snap election, while Likud only secured 31. Gantz said that the results pave the way for him to become prime minister, assuming that a coalition, minus Bibi, can be formed.

If Gantz fails to secure 61 seats in the Knesset, Israel’s political deadlock could continue, forcing the third election this year.
https://www.rt.com/news/469168-gantz-netanyahu-unity-government-refused/ 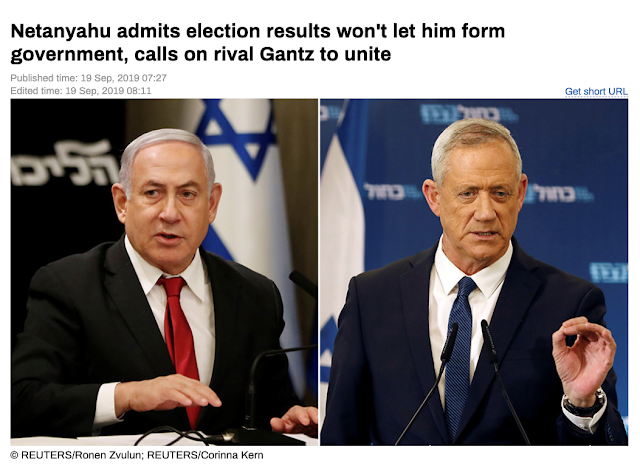