The election in Israel

Exit poll numbers show Israeli Prime Minister Benjamin Netanyahu and his Likud party look to come up short in Tuesday's major and historic snap election on which Netanyahu personally has a lot riding — not just cinching a record 5th term as prime minister, but his grand vision to annex key swathes of the West Bank and then the even closer to home reality that he could go to jail in that he needs to win to gain immunity from various corruption charges.
Exit polls conducted by the country's three main TV channels suggest he could be facing a disastrous defeat, based on his right wing coalition not gaining 61 seats needed for a majority. The exit numbers per Axios:


The Knesset has 120 members, with blocs needing 61 votes to keep a simple majority.
The Wall Street Journal reports it remains too close to call, given also the three major television polls have been wrong in the past when the official votes were tallied.
However, the last round of polls published Friday had showed Likud tied with Netanyahu opponent Benny Gantz's Blue and White party, with 32 seats each — suggesting Tuesday's elections look to swing in Gantz's favor.

If this holds, Netanyahu is likely going to jail. He needed to win the election to get immunity from various corruption charges. https://twitter.com/BarakRavid/status/1174035448483778561 …

Though the exit polling shows Netanyahu's Likud has failed to produce a decisive victory, it's still fluid enough to be uncertain whether Gantz definitively won.

Because he's headed for jail 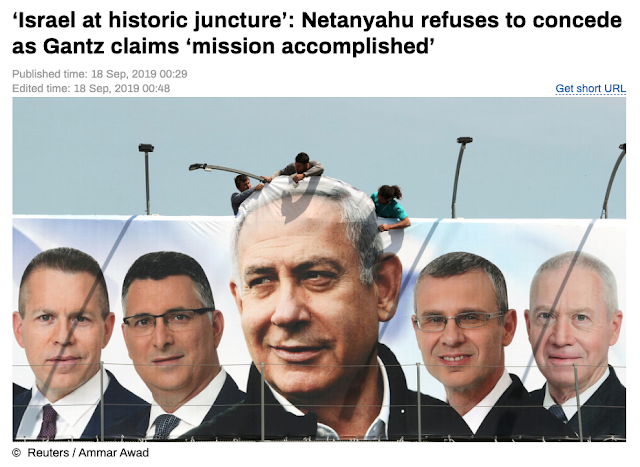 Israeli Prime Minister Benjamin Netanyahu vowed to fight on even as exit polls showed him tied or lagging behind his main opposition rival, with a slim chance of assembling the coalition needed for a fifth term.

“We won’t have and can’t have a government dependent on anti-Zionist Arab parties,” Netanyahu proclaimed as the crowd of his supporters booed and chanted 'we don't want unity.'


The embattled PM stopped short of claiming a victory – or conceding his defeat – saying instead “we are waiting for the real results. One thing is clear: Israel is at a historic juncture.”
https://www.rt.com/news/469039-netanyahu-gantz-israel-elections/
Posted by seemorerocks at 12:55