Turkish newspaper declares:"US is the enemy for Turkey"

From the pro-government newspaper in Turkey

US is the enemy for Turkey. One day, thousands of people will siege İncirlik as well 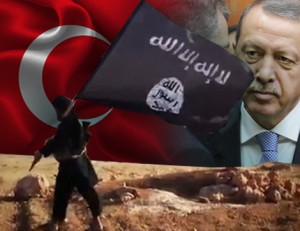 The U.S. is no longer a trustworthy country for Turkey. It is no partner, nor ally – it cannot be and will not be. Nothing it says, no guarantee it makes, no offer it presents has any response in this country – it cannot and will not.

What’s more, the U.S. is now the closest, greatest and most open threat for Turkey. It is an enemy country. It is a serious threat to our country’s existence, its unity, integrity, present and the future. It is carrying out an open attack, and an undeclared war against Turkey.

The U.S. is fighting us through the PKK and Daesh

The U.S. administration is implementing a plan camouflaged by NATO and outcries of “strategic partnership.” The plan is to divide and destroy Turkey, just like in Iraq and Syria. It is a map operation. It is carrying out a project to close off all of our country’s southern gates from the Mediterranean to the Iranian border, siege us and confine us into Anatolia, suffocate us there and shrink Turkey.

These are preparations for the “Turkey front”

The Syria war was sparked to open the “Turkey front.” That map operation surrounding our southern border is being built as the “Turkey front.” The thousands of truckloads of weapons provided to the PKK and the unknown military buildups have nothing to do with Daesh and are entirely part of preparations to be used against Turkey.

This plan is identical to the map operations the Crusaders applied in our region. The entire region spanning the Mediterranean and the Iranian border are being dehumanized, and cleared of Arabs and Turkmens; demographic deportation is being applied. This zone that is being vacated is going to be turned into a foreign garrison and filled with U.S.-Israeli military bases. All attacks on Turkey and the region will be made from this zone.

Turkey is showing and is required to show the same resistance that was shown toward the invasion of Anatolia after World War I. Now, the national struggle, a new war of independence, and homeland defense are all being carried out against the U.S. and its close allies.

Therefore, NATO alliance relations have no significance left for us. Friendship ties with the U.S. have no meaning left. For a country they could sacrifice to a terrorist organization, the U.S. and its close allies have become the primary threat.

This land has a very strong resistance gene

But they should remember, this country has a deep political gene starting from the Seljuks, to the Ottomans and to the Republic of Turkey. Just as it has been host to the great rise after the Mongolian invasion following the Crusades, Turkey will lead the great rise after World War I for the third time. These attacks are being conducted because it started this great march and rise.

This is the reason behind the July 15, 2016 coup attempt. They were going to strike from within with the Fetullah Terrorist Organization (FETÖ) and start attacking from the south using the PKK and Daesh. They were stopped in one night. This time, the second wave of attacks are being carried out. Again, from the south, but this time not only through organizations - the U.S. is also deploying its soldiers on our borders.

İncirlik must be shut down, other bases must be brought to the table

Thousands of people will march to İncirlik Base

The threat is not only in Syrian territory; there is a domestic threat and the danger must be eliminated immediately. If this is not done, cannot be done, there will come a time when thousands of people surround and siege the İncirlik Base. When that time comes, nobody can stop this nation from intervening in foreign military units, because that anger cannot be stopped or controlled.

Our entire southern border, from the Mediterranean to the Iranian border, will be cleared of threats. This is a defense of Anatolia. This land is witness to a defense, a resistance that has no other example in any other region. Those that liken Turkey to Syria and Iraq and make plans accordingly will be greatly disappointed. History has turned and even the U.S. cannot prevent this turn anymore.

No force should dare try to test our nation

Our people are displaying an example of great solidarity, like in the War of Independence. As soon as the operation in Afrin started, as soon as U.S. threats became revealed, this solidarity became activated. Nobody should dare test how much our people can sacrifice, because they will be mistaken.

As the U.S. continues to struggle with the power wars within, it is not in a position to put us in our place. With its power structure divided into a thousand pieces, it is not in a position to make adjustments to this region. That era is over, it lost in Iraq and Syria. The era of dividing countries with two terrorist organizations and frightening Turkey is long over.

This is not war, it is a fight to protect our house

Turkey is determined. It is going to make all decisions, evaluations, take all measures, make all future plans not with the U.S.’s prompting, but with its own identity, its historic stance, and its millennium-old political experience in the region. The operation that started in Afrin is going to expand to Manbij; once the Mediterranean gate of the terror corridor is closed, the necessary fight will be fought in the east of the Euphrates.

This is not war, it is a defense. This is not a foreign intervention, it is the fight to protect our borders, our home. If we do not fight this now, they are going to carry the war inside Anatolia and hunt us down in our home.

As a nation, as a state tradition, we have activated the same codes and example of solidarity as that which has kept us alive and standing in this region for centuries with the same identity and foresight. This is fate, it is a historic responsibility, a way out for the region.

This is “relentless resistance.” Afrin is only the beginning

Turkey must never hesitate, never question its decisions through others’ deceitful suggestions and should never be anxious. Turkey should build islands of resistance not only along its border, but within the depths of the region, everywhere it can reach. It should remember what it experienced in the entire region a century ago, it should see well who is in which front, use memories today and determine its defense line accordingly.

This is “relentless resistance.” It is a resistance that will tear up their draft maps.

You will see, this is what will happen. Afrin is only the beginning. There is nowhere else we can set foot outside the “Turkey axis.”
Posted by seemorerocks at 10:59