McCabe Lashed Out at Colleagues Who Demanded He Resign

As I signalled in the weekend I intend to use Turner’s material selectively. He seems to have contacts on the inside that few others have.

*** FURY *** McCabe Threatens to "Torch the FBI" may "spill the beans" on everything they've done! 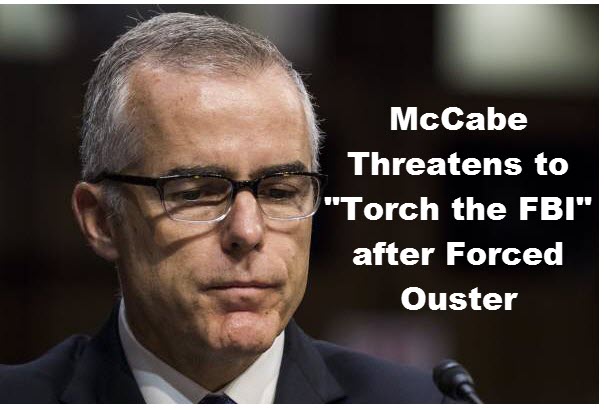 FBI Deputy Director Andrew McCabe in the days leading up to his forced resignation Monday threatened to “torch” the FBI if he was expelled from his job without full retirement benefits, according to sources with direct knowledge of private conversations McCabe shared with agents.

“He was unglued,” one FBI source said.

“Someone should keep an eye on him.”

But McCabe may also have been reacting, in part, to another growing problem beyond the corruption scandals enveloping McCabe’s leadership at the embattled FBI.

An FBI insider with Intel inside the embattled Bureau who has vigilantly worked to uncover systemic corruption inside the FBI, is rumored to be penning a tell-all book that promises to blow the roof off the inner-workings of the FBI’s controversial 7th-Floor.

This could spell trouble for more people than McCabe.
The vote was announced to reporters by California Rep. Adam Schiff, the top Democrat on the committee, who called it a “very sad day, I think, in the history of this committee.”

President Trump now has five days to decide whether he has any objections before the memo can be publicly released.

Last week, a top Justice Department official urged House Intelligence Chairman Devin Nunes not to release the memo, saying it would be “extraordinarily reckless” and could harm national security and ongoing investigations.

The four-page memo is being described by GOP lawmakers as “shocking,” “troubling” and “alarming,” with one congressman likening the details to KGB activity in Russia.

Those who have seen the document suggest it reveals what role the unverified anti-Trump "dossier" played in the application for a surveillance warrant on at least one Trump associate.

The vote came the same day that it was reported that FBI official Andrew McCabe has left his post as deputy director.

The White House seems to favor the memo's release, but wouldn’t explicitly say whether the president will back the effort.

“We want full transparency,” White House press secretary Sarah Sanders said Monday. “That's what we have said all along.”

Sanders said they were letting the process play out before officially weighing in.

According to one source, Wray was asked to point out inaccuracies or other issues with the wording -- and said he would need “his people to take a look at it.” The source said the review is ongoing.

He also suggested the memo indeed addresses whether the FBI relied at least in part on the dossier -- paid for partially by Democrats and the Clinton campaign during the 2016 presidential election -- to apply to a secret federal court to get a surveillance warrant, purportedly on then-Trump adviser Carter Page.

“If you … want to know whether or not the dossier was used in court proceedings, whether or not it was vetted before it was used. … If you are interested in who paid for the dossier … then, yes, you'll want the memo to come out,” Gowdy told “Fox News Sunday.”

The dossier was compiled by former British intelligence officer Christopher Steele and contained opposition research on Trump during the 2016 presidential campaign. Steele was hired by the U.S. firm Fusion GPS, which commissioned the research with funding from the Democratic National Committee and the campaign of Democratic presidential nominee Hillary Clinton. At the same time, the firm was allegedly doing work to help the Russian government fight sanctions.

Requests for surveillance warrants are made through the U.S. Foreign Intelligence Surveillance Court, also known as the FISA court, and target suspected foreign spies inside the United States.

Trump ***NOT*** Releasing His State-of-the-Union Speech in Advance

The White House will **NOT** release the text of President Trump's State of the Union Speech before he delivers it to a Joint Session of Congress Tuesday night. (Hal Turner Note: In my 55 years on this planet, no President has -- E V E R -- done that.)

Speculation is now running wild as to **WHY** the President is doing this. What does he plan to say that he doesn't want anyone to know in advance? What news is he going to deliver to the American People?

Guesses are a dime a dozen, but several theories seem to be rising above the crowd. Here are the "trending" possibilities - and this is ALL SPECULATION:

1) The President may have decided to read aloud, the FISA Abuse memo declassified by the House Intel Committee

2) The President may announce that there are now more than TEN THOUSAND sealed federal criminal Indictments in the 94 federal districts throughout the US, and that arrests of very prominent and powerful people are about to commence.

3) The President may announce that peaceful efforts to deal with North Korea are failing and we should prepare ourselves for actual war.

Again, each one of these possibilities is complete, total SPECULATION. There is no specific source for any of this, but several sources for each -- and they have all prefaced their remarks as being SPECULATION.

In any case, the fact that the President is not releasing the text of his speech before he delivers it, is historic. TO my knowledge, no other American President has ever done this.

The State of the Union Address will be delivered Tuesday, January 30, 208 at 9:00 PM eastern US Time (GMT -0500) and will be carried live by most major TV networks.