From ‘Q’: Is there a plot to assasinate Trump?

What would happen if texts originating from a FBI agent to several [internals] discussed the assassination (possibility) of the POTUS or member of his family?
What if the texts suggest foreign allies were involved?
Forget the Russia set up [1 of 22].
This is only the beginning.
Be careful what you wish for.
AS THE WORLD TURNS.
Could messages such as those be publicly disclosed?
What happens to the FBI?
What happens to the DOJ?
What happens to special counsel?
What happens in general?
Every FBI/DOJ prev case could be challenged.
Lawless.
Think logically.
We haven’t started the drops re: human trafficking / sacrifices [yet][worst].
Those [good] who know cannot sleep.
Those [good] who know cannot find peace.
Those [good] who know will not rest until those responsible are held accountable.
Nobody can possibly imagine the pure evil and corruption out there.
Those you trust are the most guilty of sin.
Who are we taught to trust?
If you are religious, PRAY.
60% must remain private [at least] - for humanity.
These people should be hanging.
Q

More than 130 congressional members have viewed the classified four-page memo detailing what senior government officials describe as “disturbing and explosive” surveillance abuse by employees of the FBI and Department of Justice under the Obama administration against President Trump and members of his campaign.

But almost all of them were Republicans.
Since the document was released Thursday to House members “only Democrats on the House Intelligence Committee have seen it,” a congressional source with knowledge of the memo said.
The classified memo was described by senior government officials as a detailed account of the House Intelligence Committee’s investigation into the FBI and apparent FISA abuse associated with the controversial dossier that alleged President Trump colluded with Russia during the 2016 presidential election. As recently reported, some congressional members who reviewed the memo said the revelations may end in the removal or criminal prosecution of senior officials in the FBI and Department of Justice.
Congressional officials expect the classified memo to be made available to the public before the end of the month. In order to make the classified memo public, the House Intelligence Committee, chaired by California Republican Devin Nunes, must first have another vote, a congressional source stated.
The vote is expected to happen and then the classified memo will be given to “POTUS for five days” so he can review it, the source stated. If POTUS objects to releasing the memo it will then go to the full House for a vote, they added.
President Trump is expected to approve the release of the memo.
Members who viewed the document say it is especially significant since the DOJ’s Inspector General Michale E. Horowitz will be issuing a report into how the FBI and DOJ handled the investigation into former presidential candidate Hillary Clinton and her use of an unsecured private server to send classified information.
Rep. Jim Jordan, R-Ohio, and Rep. Matt Gaetz, R-FL, who viewed the memo Thursday said they are demanding it be made public but could not discuss the details of the memo due to its classified nature.
Rep. Adam Schiff, D- CA, said in a statement the memo is “profoundly misleading set of talking points drafted by Republican staff attacking the FBI and its handling of the investigation,” he said in a statement to CNN.
The classified memo, however, is expected to expose severe abuse of the Foreign Intelligence Surveillance Act, which allows the intelligence community to gather communications on foreign subjects. Americans, however, are swept up in the collection of telephone, email and various other communications. The secret court chided the Obama administration in declassified documents when it discovered that  one out of every 20 searches seeking upstream Internet data on Americans inside the NSA’s so-called Section 702 database violated the safeguards Obama and his intelligence chiefs vowed to follow in 2011. The Obama administration self disclosed these violations just days before the 2016 presidential election.

The failure of the Obama administration to disclose the extent of the violations earlier amounted to an “institutional lack of candor” and that the improper searches constituted a “very serious Fourth Amendment issue,” according to the court documents that were unsealed April 26, 2017.
The Senate voted 65-34 on Thursday to reauthorize a FISA provision for another six years, allowing the U.S. intelligence community to conduct surveillance on foreign targets.
Correction: Due to an editorial error Rep. Adam Schiff , D-CA, was mislabeled. He is a California Democrat.

BREAKING: TRUMP GIVEN FISA MEMO TO REVIEW ABUSES SOON. BEFORE FBI AND DOJ 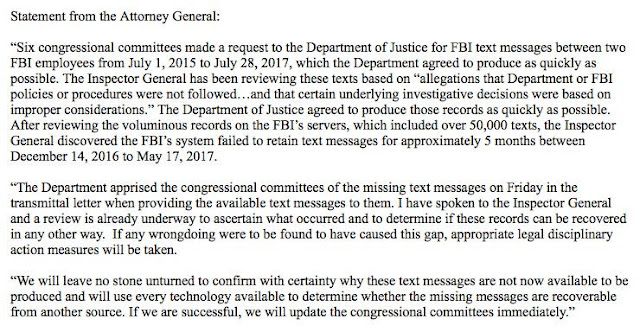