Ring of Fire: 6 extremely active volcanoes in the last 7 days 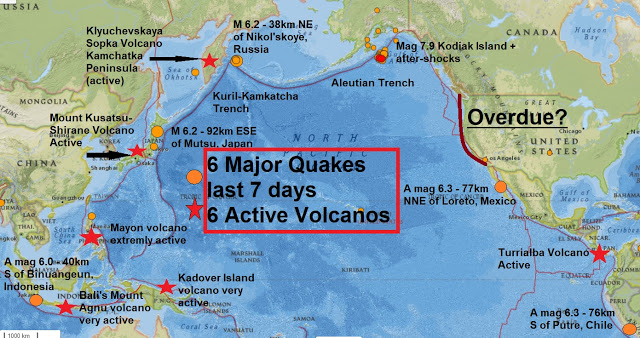 
The mag 6.2 - 38km NE of Nikol'skoye, Russia this morning is yet another major quake on the Pacific rim, the 6th in the last 8 days, see above, add to it the 6 most active volcanoes and it's easy to see the Pacific ring of fire is bursting at the moment.

With the Mayon volcano in Indonesia and the Kadova Island volcano Papua New Guinea expecting imminent explosions and three major quakes in 24 hours including the powerful Alaskan quake something big could be in the offing.

The whole Pacific Ring is rumbling, from Alaska to Papua New Guinea and Chile to Russia and Philippines to Mexico with one exception, once again the US West coast has come away unscathed but for how long?

With nearly 200,000 people evacuated or affected by Pacific Ring volcano activity and the fact that millions got lucky along US and Canada coast once again yesterday when a massive 7.9 quake rocked Alaska, we must surely be asking ourselves when not if will the big one strike!.

Today's major quake is the 9th major quake to strike our planet this month and of course 2018.

And with the Earth still exiting a stream of fast-moving solar wind from the recent Coronal hole, today's and yesterdays quake has recorded an impressive 9 from 9 major earthquakes this year to have occurred during solar wind and or a coronal hole influencing the Earth's magnetosphere.


It is a Big Wobble project this year to document just how many major quakes occur during a coronal hole facing Earth, so far so good, it's 9 from 9, 100 %.
Posted by seemorerocks at 14:45