Outside of the train bearing down on us I cannot think of a single issue that threatens the future of humanity than the American neo-conservative Deep State taking us into a nuclear war with Russia.

Previous generations were aware of the unacceptable risk and so both powers tried to cool things down with periods of detente.

This time round we have insane psychopaths in charge who are willing to take the world to war, essentially because Hillary Clinton can’t accept she lost the last election.

I have never heard Stephen Cohen, who I hold in the highest regard, being so angry and worried. He even throws a line about when they come to arrest him and John Batchelor. He places all his hope on the moderate Putin not over-reacting and on Trump as he was before the election.

Peeple don’t seem to be able to hold more than one thought in their head. There are people who are (more-or-less) realistic about climate change but support Hillary and (possibly unconsciously) the very policies that could (WILL) take us to Armageddon.

This is the Deep State and the Democrats (and less so, the Republicans) not Trump.

If you are short of time listen to Part 4

The American Bipartisan Policy Establishment Declares Its ‘Second Cold War’ vs. Russia After Years of Denying It

The most influential US foreign-policy membership society has issued a report affirming the new Cold War and its eagerness to fight it.


Stephen F. Cohen, professor emeritus of Russian studies and politics at NYU and Princeton, and John Batchelor continue their (usually) weekly discussions of the new US-Russian Cold War. (Previous installments, now in their fourth year, are at TheNation.com.)

Cohen points out that he has been warning against a new Cold War since the early 2000s, as reflected in the subtitle of his 2009 book Soviet Fates and Lost Alternatives: From Stalinism to the New Cold War and in his earlier publications. He and Batchelor have been discussing the new Cold War almost weekly since 2014. For years, leading US policy-makers, media commentators, and scholars have denied its existence, even its possibility, citing Russia’s purported weakness; the absence of “ideological conflict”; the non-global nature of conflicts that had unfolded since the end of the Soviet Union in 1991; the benign nature of US policy toward Russia; etc. In truth, these Cold War deniers were either uninformed, myopic, or unwilling to acknowledge their own complicity in the squandered opportunity for a post-Soviet peace, even an American-Russian strategic partnership. Now the deniers’ most prestigious and influential foreign policy organization, the Council on Foreign Relations (CFR), has issued an official report fully acknowledging, even eagerly declaring, that “The United States is currently in a second Cold War with Russia.”

The importance of the CFR, Cohen emphasizes, is not easily exaggerated. As its activities, history, self-proclamations, and Wikipedia entry make clear, it is not an ordinary “think tank.” Founded nearly a century ago, headquartered lavishly in New York City with a branch in Washington, with almost 5,000 current carefully selected members and considerable annual revenue, its aura, exceedingly influential journal Foreign Affairs, and elite members have long made the CFR America’s single most important non-governmental foreign-policy organization—certainly for politicians, business executives, media leaders, academics, and others involved in the shaping of US foreign policy. Almost all of them aspire to CFR membership or its imprimatur in one way or another. (Joseph Biden, for example, already bidding for the 2020 Democratic presidential nomination, recently published an article in Foreign Affairs, as do many presidential candidates.) For decades, the CFR’s primary functional role has been, through its journal, website, featured events, and multiple weekly membership sessions, to define the accepted, legitimate, orthodox parameters of discussion about US foreign policy and related issues. Regarding Russia, even the Soviet Union, the CFR, as a professed bipartisan, independent, centrist organization, generally adhered to this role for many years, though not badly. (Cohen himself became a member in the 1970s.) It featured varying, even conflicting, expertise and opinions about the 40-year Cold War and thereby fostered genuine intellectual and policy debate. This more ecumenical, pluralist orientation largely ended, however, more than a decade ago, when opinions incompatible with Washington’s growing “group think” about Russia were increasingly excluded, with very few exceptions. The CFR—much like Congress and the mainstream media—became a bastion of the new Cold War, though without acknowledging it.

Now it has done so. The CFR’s new report, “Containing Russia,” by two “bipartisan” veterans of the genre, both CFR fellows, Robert D. Blackwill and Philip H. Gordon, could have been published during the hyperventilated early stage of the preceding Cold War, before it was tempered by the 1962 Cuban missile crisis, as reflected in its title. The best that can be said about the report is its banality—its some 50 pages and 72 endnotes offering little more than a superficial, though devout, digest of the mainstream media malpractice of recent years that includes unbalanced narratives of contemporary events, questionable “facts,” elliptical history (if any at all), opinion and ideology passing as reporting and analysis, and not a little Russophobia.

Still worse, but equally typical and not surprisingly, the still unproven allegations of “Russiagate” are the pretext and pivot of the CFR report. (Indeed, the authors inflate the allegations’ already inflammatory rhetoric: “Moscow’s ultimate objective was regime change in the United States.”) Thus the first sentence of the introduction by CFR president Richard Haass: “Russia’s interference in the 2016 US presidential election constituted an attack on American democracy.” (Thereby echoing, Cohen recalls, a tacky Hollywood video produced a few months ago. The authors also repeat hyperbolic assertions equating “the attack” with Pearl Harbor and 9/11.) From this, the report goes on to refer, directly and allusively, to the alleged Kremlin-Trump “collusion,” and then to project the “threat” represented by Russian President Putin, who is presented as having no legitimate Russian national interests, only “paranoia,” to “worldwide” status. Again, every piece of alternative—or conflicting—reporting, analysis, and sourcing is omitted, as is any mention of the many retracted and “corrected” mainstream media articles and broadcasts. Nowhere is there any serious concern about the graver dangers inherent in this “second Cold War,” as Cohen has often noted: its political epicenter is not in faraway Berlin but directly on Russia’s borders; its development has generated a new nuclear arms race with talk of “usable” nuclear warheads; the Kremlin leader has been so demonized he is considered unfit for any of the kinds of détente that eased previous Cold War conflicts; there are no significant organized anti–Cold War, pro-détente forces in the US political-media establishment; and more aspects to cause grave alarm. And in this perilous context, the CFR “recommendations” are of the back-to-the-future kind— back to the initial, unbridled, pre-1962 crisis threats and escalations.

Considering how this shabby—some may say shameful—report should reflect on the CFR’s reputation, what, Cohen asks, was the motivation behind its publication? Recalling that it comes on the heels of similar Cold War exhortations—Biden’s article mentioned earlier, Senator Ben Cardin’s similar “report” not long ago, leading newspaper editorials demanding a stronger reaction to “ “Russia’s war on the West,” and the Trump administration’s own preposterous but ramifying doctrinal declaration last week that Russia and China are now a greater threat than is international terrorism—the CFR report’s motivation seems to be threefold: to mobilize the bipartisan US policy establishment behind a radical escalation of the new Cold War (tellingly, it also criticizes former President Obama for not having done enough to counter Moscow’s “growing geopolitical challenge”); to preclude any critical mainstream discussion of past or current US policy in order to blame only Russia; and thereby to prevent the possibility of any kind of détente.

And indeed the CFR report may slam the door, already nearly shut, on such discussions and policies. If so, Cohen asks, where is any hope, any way out of this unprecedentedly perilous state of US-Russian relations? He suggests three possibilities, though with little conviction.

§ Recent opinion surveys suggest that a majority of Americans have no appetite for such reckless policies. Conceivably, they could vote to change Washington’s approach to Russia. But for this they would need such candidates and time, and there are currently neither.

§ As during the 40-year Cold War, the CFR Report seeks to mobilize European allies behind escalating the “second Cold War.” In several major European countries and parties, there also appears to be little appetite for this. Americans may have to look to Europe for alternative leadership, while hoping that Moscow does not overreact.

§ But, Cohen concludes, the only immediate possibility is that Kremlingate allegations do not prevent President Trump from becoming—presented in the CFR Report as implicit evidence of criminality—the candidate who seemed to want to be a pro-détente president “cooperating with Russia.” Even so, would the Council on Foreign Relations’ like-minded praetorians in Washington permit it?

How to Respond to Moscow’s Intervention in U.S. Democracy and Growing Geopolitical Challenge 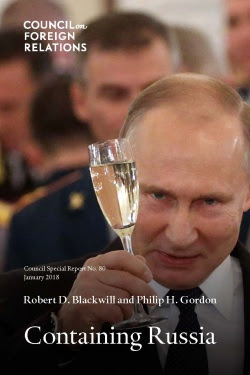 Read the report HERE
Posted by seemorerocks at 11:05