A controversial Democratic operative considered a Clinton "hatchet man" wrote a second anti-Trump memo, which was presented to the FBI in October 2016 by former UK spy Christopher Steele, according to reporting by  theGuardian, one day after the House Intel Committee voted to release the confidential and "shocking" FISA memo to the public.


This “second dossier” was authored by Cody Shearer, a former journalist and political activist for the Clinton White House in the 1990s. According to the Guardian, it confirms Steele’s claim that Trump was “compromised” by the Russian intelligence in 2013, during a trip to Moscow that involved “lewd acts” at a five-star hotel.

Cody Shearer cites an unnamed source within Russia's Security Service (FSB) for his claims, meaning that both anti-Trump dossiers tied to Hillary Clinton used Russian disinformation to discredit and undermine a candidate for U.S. President. 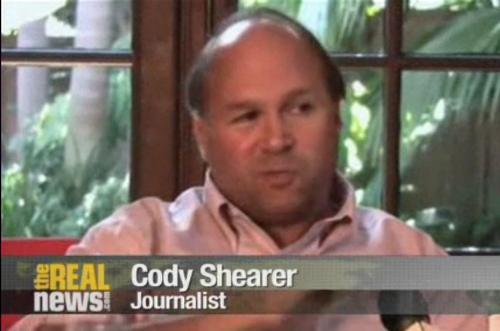 Citing a "source with knowledge of the inquiry," the Guardian reported that the FBI was “still working on” the Shearer dossier, suggesting the bureau was taking at least some of it seriously. "It raises the possibility that parts of the Steele dossier, which has been derided by Trump’s supporters, may have been corroborated by Shearer’s research, or could still be,” wrote the Guardian's Stephanie Kirchgaessner and Nick Hopkins.
Shearer's name recently appeared in a January 25 letter from the Senate Judiciary Committee to six individuals or entities thought to be involved in the funding, creation or distribution of the original salacious and unverified "Trump-Russia Dossier." Recipients of the letter - including John Podesta, Hillary Clinton and Debbie Wasserman Schultz - are asked to submit all communications between a list of 40 individuals or entities, one of whom is Cody Shearer.

Sean Davis ✔@seanmdav
And now we know why Grassley/Graham asked the DNC to turn over all communications they had with Cody Shearer and Sidney Blumenthal. https://www.theguardian.com/us-news/2018/jan/30/trump-russia-collusion-fbi-cody-shearer-memo …

While Clinton fans were delighted by the emergence of the new memo...

Another dossier independently corroborates much of the Steele dossier

Memo written by former journalist Cody Shearer independently sets out many of the allegations made by British ex-spy Christopher Steele
theguardian.com

@krassenstein
BREAKING: The Guardian reports that the FBI has been given a 2nd dossier/memo by Cody Shearer, a journalist/activist, that independently set out many of the same allegations made in a Steele's dossier, including allegations that Trump was compromised during a 2013 Moscow Trip.

... Conservatives were more skeptical of the latest unconfirmed "dossier" given Shearer’s past. His brother served as an ambassador during the Clinton administration, and his late sister was married to Strobe Talbott, the chief authority on Russia in President Bill Clinton’s State Department, according to ProPublica.

Furthermore, during the Benghazi investigation of Hillary Clinton in 2015, the National Review called Shearer “someone with a history of misleading foreign sources, misrepresenting himself as an agent of the US government, and creating trouble for both himself and the United States abroad.”
NR cited the story about Shearer’s secret trip to Bosnia in the 1990s, where he extorted money from the Bosnian Serbs, claiming he was a secret envoy of the Clinton administration and could negotiate a reduction of war crimes charges.

Like the original dossier, the Guardian adds that Shearer shared his dossier “with select media organisations before the election,” without naming the outlets. The Daily Caller's Chuck Ross cites a passage from a recent book by the Guardian’s former correspondent in Moscow, Luke Harding, about how he received an email from the “Clinton camp” that contained the same accusations as in the Steele dossier, but was not Steele’s work.

Chuck Ross@ChuckRossDC
Replying to @ChuckRossDC
He technically did not lie, just seems to have withheld relevant information.

That at least suggests that Shearer’s document didn’t just appear out of thin air to conveniently back up Steele’s claims just as the original dossier is about to be challenged by a congressional memo. However, it also suggests that both dossiers claiming Trump’s ties to Russian intelligence came from sources either close to, or paid for by, Hillary Clinton.
Meanwhile, the FBI is still analyzing the "Shearer memo" and pursuing "intriguing leads," according to The Guardian, which  could mean that the agency may be using Shearer's research to corroborate parts of the original "Trump-Russia" Steele dossier. In other words, Christopher Steele provided the FBI with two dossiers, the second of which may have been designed to support the first.

✔@PoliticalShort
FBI was given a 2nd phony Trump dossier in Oct 2016 by Steele, this one written by Clinton hatchet man Cody Shearer. 2nd dossier was meant to "corroborate allegations" made in the first phony dossier created by Steele, funded by Clinton & DNC. Both dossiers cite FSB as source.. https://twitter.com/seanmdav/status/958377386596294656 …

As we previously reported, Congressional investigators have been researching what appears to be a massive and coordinated conspiracy between the Clinton campaign, DNC, FBI, DOJ, Obama Administration and opposition research firm Fusion GPS to discredit Donald Trump with Russian disinformation. The scheme involved high level officials within the DOJ and FBI, including recently demoted Deputy FBI Director Andrew McCabe - whose "7th floor" Deep State cabal both exonerated Hillary Clinton while simultaneously "investigating" Trump.
A brief refresher of facts and allegations:
And now we can add Clinton crony Cody Shearer and his second Trump-Russia dossier to the list.

✔@PoliticalShort
Fact that both of these "dossiers" cite unnamed FSB sources for their allegations of "Trump collusion" & it doesn't happen to raise any red flags is astonishing. Why weren't both of these dossiers treated as text book examples of Kremlin disinformation? https://www.wsj.com/articles/the-steele-dossier-fits-the-kremlin-playbook-1517175564 … https://twitter.com/PoliticalShort/status/958383687711600640 …

The likely objective was to undermine Republicans, Democrats—and American democracy.
wsj.com
Posted by seemorerocks at 11:45