I have put the thermometer at grass level in the sun: temp is 42 deg C (approx 104F)

Temp inside the house is 29.3C

Officially it is 29C


Contradictory and inaccurate reporting of weather records in New Zealand

Here is a report in the Otago Daily Times on the current heatwave in New Zealand.

South to swelter as heatwave hits

It accurately points out that we are headed for the highest average temperatures recorded for January.

However there are some glaring inaccuracies and contradictions that a lazy reporter has failed to point out.

Here is the essence of what the report is saying.

Wanaka's golden run starts today, when the mercury is expected to hit 30C and continue to get hotter, reaching 34C on Monday. It is expected to remain above 30C on Tuesday.


A heatwave is when the daily maximum temperature is higher than the average maximum by at least 5C for five consecutive days.

MetService forecaster Tom Adams said given Wanaka's average maximum temperature is 24C, the forecast highs over the next five days meant it would be in a heatwave.

Not far away, Alexandra is predicted to hit 35C on Monday.

Twizel is also tippd to feel the heat, with temperatures expected to reach 34C for three out of the next six days. The other days will be just a degree or two cooler but remain above 30C.

Even Christchurch is forecast to reach 34C on Tuesday....

January is shaping up to be the hottest in recorded history.


Climate scientist Jim Salinger said if the average temperature for the month slides up just half a degree it may be the hottest month in recorded history.

Before the coming southern heatwave the average was sitting at 19.3C making it the hottest ever.

Christchurch had three days above 30 between the 8th and 11th of December, but this was not a heatwave.

Is a heatwave expected next week? Here are the facts and forecasts that matter, find out more for your town on http://bit.ly/metservicenz
^TA 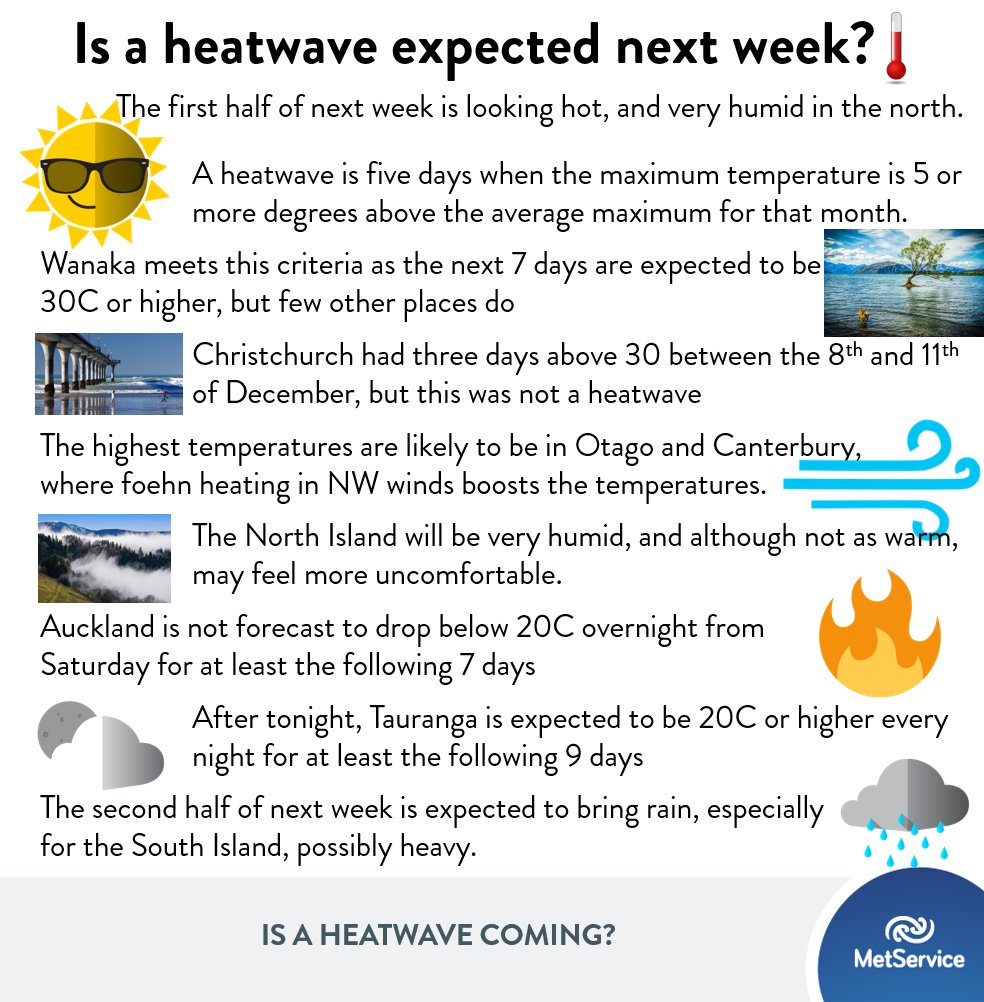 Here are two statements from Metservice that appeared next to each other: 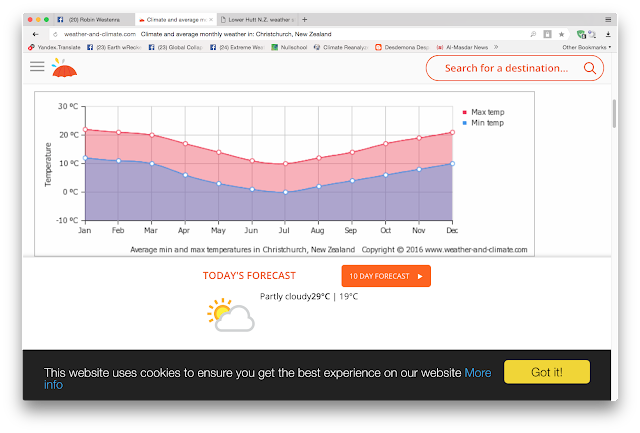 Throughout the month of January daytime temperatures will generally reach highs of around 20°C that's about 69°F. At night the average minimum temperature drops down to around 14°C, that's 57°F.

If I take the first definition first.

Official data tells me that ""Christchurch has a dry, temperate climate, with mean daily maximum air temperatures of 22.5 degrees Celsius (72.5 °Fahrenheit) in January".

If I take the first definition first that means that for there to be a heatwave you would have had to seen a temperature of 27.5 degrees Celsius for a period of 5 days.

And yet they are saying in the very next breath that Christchurch had three consecutive days at 30C (and I find it easy to believe that these official temperatures do not tell the real picture) and therefore there was no heatwave.

What is it to be?

I can't say too much about other parts of the country but I can talk about the town where I live.

We tend to get thrown in with the capital Wellington which often has cooler temperatures than Lower Hutt.

There is no mention of Lower Hutt in the national news except to say that when the Deep South had record temperatures the situation was similar here. 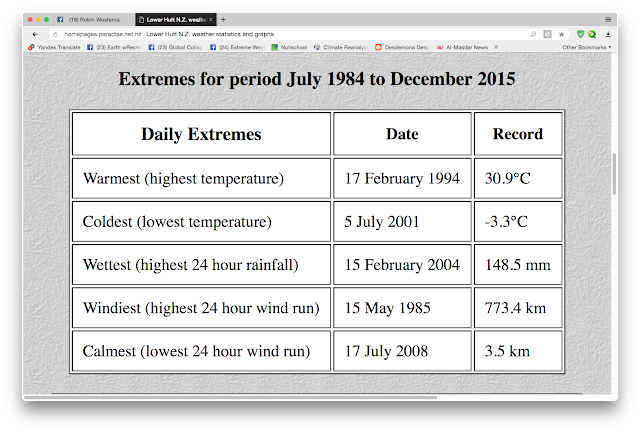 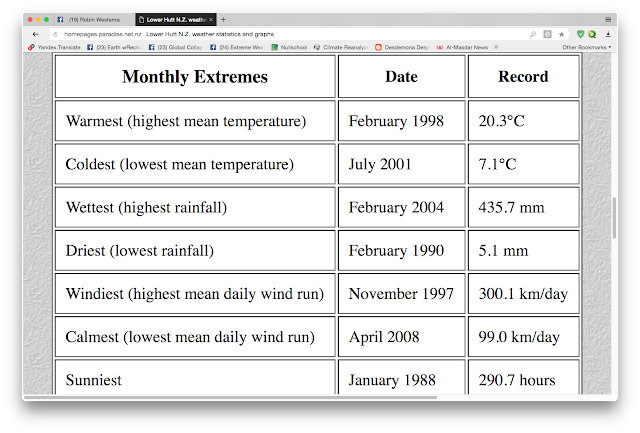 I know that in the last 2 months (when we had a low pressure system with rain) the temperature never went below 18 degrees Celsius.

In the last few nights when I have been able to measure it the temperatures have not gone below 22 degrees Celsius.

We have certainly seen temperatures exceeding the previous 1994 official record of 30.9C ("unofficial temperatures recorded by the media reflect temperatures above this).

In the past few days the temperature measured here has been 28C almost constantly - more than that today).

Unless there is some esoteric, scientific reason to contradict it my conclusion is that the official information coming from Metservice is contradictory and inaccurate. Even the official temperatures can be at least a degree lower than the unofficial (but accurate ones)

One example is a clock in Winton, Southland, recording a temperature of over 40 degrees Celsius when the official record placed the highest temperature at bout 6 degrees lower than than.

Pam heard a forecast of around 40 degrees for further up the valley over the coming weekend.

I doubt if that will be reflected in the official temperatures.

IMPLICATIONS FOR THE NORTHERN HEMISPHERE 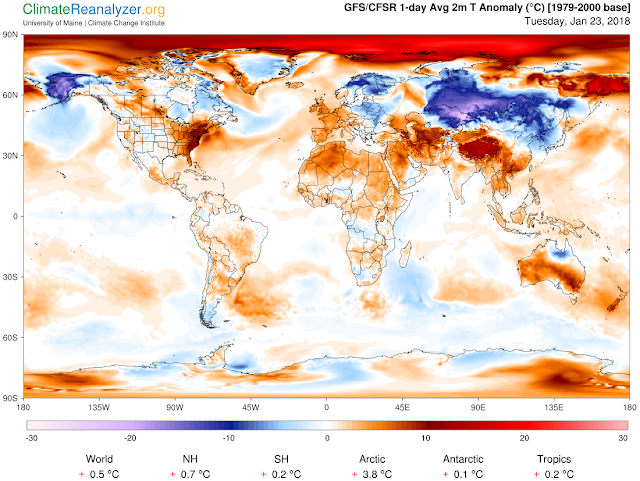 There may be a warning here for the Northeren Hemisphere. These are the conditions in the south seas in a year of la-Nina which is supposed to bring cooler conditions with easterly winds. The weather people have their own covoluted explanation of why this might be without mentioning the elephant in the room.

Predictions are, however, that the la-Nina condiions will give way to an el-Nino by the northern summer.

I would guess that with what is happening to the Arctic and to the Jet Stream, along with an el-Nino all bets are off and we should all be bracing for impact.