Sean Hannity made his triumphant return to Twitter Saturday night. The conservative firebrand thanked all his followers for their support and warned Monday was going to be a “big day.” 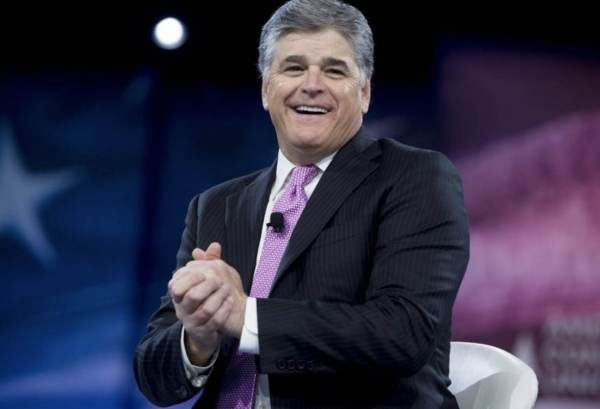 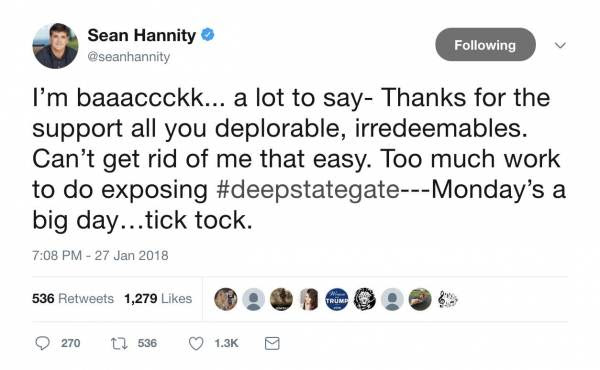 On Sunday evening, the Fox News host dropped a major clue about what tomorrow’s broadcast may cover. Firing off yet another “Tick Tock,” warning, Hannity tweeted Byron York’s piece for the Washington Examiner, which says House Intelligence Committee Republicans could vote to release the FISA abuse memo tomorrow. Does the Fox News host already know the Committee will vote to make the “shocking,” four-page document public?
York writes the House Intelligence Committee is scheduled to meet at 5:00 PM EST and may call a vote to release the memo.

The meeting will give the committee its first opportunity to vote on the question of releasing the so-called “FISA abuse” memo that has captured Washington’s attention in recent days. Since the GOP holds a 13 to 9 advantage on the committee, the overwhelming likelihood is that if there is a vote, the panel will decide, along party lines, to release the memo.

At that point, House rules call for the committee to await a decision by the president on whether he supports or opposes release of the memo. President Trump has made clear he supports release, so the memo could be made public quickly.

The public might also learn committee Democrats’ plans for a counter-memo. Ranking member Rep. Adam Schiff has accused Republicans of cherry-picking and distorting the intelligence underlying the GOP memo, and last Wednesday announced that Democrats would “draft our own memorandum, setting out the relevant facts and exposing the misleading character of the Republicans’ document.”

As The Gateway Pundit‘s Jim Hoft reported, reporter Sara Carter told Fox News on Sunday that she estimates the memo will be released “probably within the week.”

Carter warned the FOX anchors, “This is really going to be big!”
“FOX and Friends“ host Pete Hegseth said the release may be on Monday.

CARTER: We know that probably within the week, now I’m not guessing tomorrow. I’ve been hearing different things. The House Intelligence Committee will go to a vote on this first. This is what has to happen first. We know that the president right now, according to my sources, is not going to object to the release of the memo and I think that’s what’s most important here. 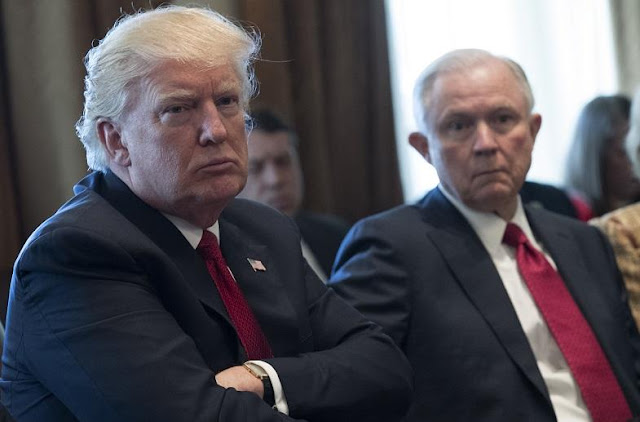 President Trump broke with the Department of Justice last week by calling for the release of a four-page "FISA memo" purportedly summarizing widespread surveillance absues by the FBI, DOJ and Obama Administration, reports the
Washington Post..

The President's desire was relayed to Attorney General Jeff Sessions by White House Chief-of-Staff John Kelly last Wednesday - putting the Trump White House at odds with the DOJ - which said that releasing the classified memo written by congressional republicans "extraordinarily reckless" without allowing the Department of Justice to first review the memo detailing its own criminal malfeasance during and after the 2016 presidential election.

The decision to release the memo ultimately lies with congress.

Somehow WaPo knew that Kelly and Sessions spoke twice last Wednesday - once in person during a "small-group afternoon meeting" and again that night over the phone.

Trump "is inclined to have that released just because it will shed light," said a senior administration official who was speaking on the condition of anonymity to recount private conversations. "Apparently all the rumors are that it will shed light, it will help the investigators come to a conclusion."

The memo, written by staffers for House Intelligence Committee chairman Rep. Devin Nunes (R-CA), was made available for all Congressional House members in mid-January for viewing in a secure room. Lawmakers who have seen the document have called for its release to the general public, as it is said to contain "jaw dropping" revelations of extensive abuse of power and highly illegal collusion between the Obama administration, the FBI, the DOJ and the Clinton Campaign against Donald Trump and his team during and after the 2016 presidential election.

"I have read the memo," tweeted Rep. Steve King (R-IA), adding "The sickening reality has set in. I no longer hold out hope there is an innocent explanation for the information the public has seen. I have long said it is worse than Watergate. It was #neverTrump & #alwaysHillary. #releasethememo."

"It is so alarming the American people have to see this," Ohio Rep. Jim Jordan told Fox News. "It's troubling. It is shocking," North Carolina Rep. Mark Meadows said. "Part of me wishes that I didn't read it because I don't want to believe that those kinds of things could be happening in this country that I call home and love so much."

Lee Zeldin
✔@RepLeeZeldin
Immediately #ReleaseTheMemo #FISAMemo & ALL relevant material sourced in it. Every American needs to know the truth! We wouldn't be revealing any sources & methods that we shouldn't; only feds' reliance on bad sources & methods.

Meanwhile, The Washington Post is spinning Trump's desire to release the memo as yet another example of the President's "year-long attempts to shape and influence an investigation that is fundamentally outside his control," pointing to reports that he wanted to fire special counsel Robert Mueller III last summer (which Trump denies). WaPo also points to Trump's complaints over Deputy Attorney General Rod Rosenstein for not properly supervising the Mueller probe, and the President's alleged comments to former FBI Director James Comey demanding loyalty and asking him to back off the investigation into former National Security advisor Michael Flynn, who was fired for misleading Vice President Mice Pence over his contact with Russians.

In other words, Trump has been resisting an active investigation which has yet to prove any collusion, and which has experienced significant mission creep into the personal finances of the Trump team - and The Washington Post is spinning it as Trump once again interfering with an investigation.

So now the President is calling for the release of the four-page FISA memo, which will reportedly put an end to the Russia investigation while quite possibly setting the stage for the criminal prosecution of those involved in trying to frame Trump.

That said, the Washington Post article appears to be nothing more than an exercise in pearl clutching over Trump's demands for loyalty - as the paper notes that nothing the President has done is likely to lead to criminal charges.

To prove obstruction of justice, Mueller would have to show that Trump didn't just act to derail the investigation but did so with a corrupt motive, such as an effort to hide his own misdeeds. Legal experts are divided over whether the Constitution allows for the president to be indicted while in office. As a result, Mueller might seek to outline his findings about Trump's actions in a written report rather than bring them in court through criminal charges. It would probably fall to Rosenstein to decide whether to submit the report to Congress, which has the power to open impeachment proceedings.

As Trump faced growing questions about everything from his June directive to fire Mueller to his more recent grousing about Rosenstein, the White House was largely silent. In response to several specific queries, White House spokesman Hogan Gidley offered a written statement that addressed few of them. -WaPo

"The president has been clear publicly and privately that he wants absolute transparency throughout this process," Gidley said in the statement. "Based on numerous news reports, top officials at the FBI have engaged in conduct that shows show bias against President Trump and bias for Hillary Clinton. The president has said repeatedly for months there is no consideration of terminating the special counsel."

So future leaders of the free world take note; you're not allowed express dissatisfaction when a federal agency allegedly colludes with the previous administration and an establishment candidate to rob you of an election using unverified evidence from Russian officials; it is also frowned upon to have a problem with a kangaroo-court witch hunt launched to push the invented narrative.

While lawmakers have been incredibly mum over the specifics of a four-page "FISA memo" containing allegations of FBI and DOJ malfeasance against then-candidate Donald Trump and his team, Rep. Trey Gowdy appeared on Fox News Sunday where he dropped the most telling breadcrumbs about the contents of the memo to date.

“Do you want to know that the Democratic National Committee paid for material that was never vetted, that was included in a court proceeding?” Gowdy asked rhetorically.


While it's not clear who the "primary source" is, it's possible that Gowdy is referring to Christopher Steele, the former MI6 spy who assembled the dossier - or "Senior Russian Officials" which the "Trump-Russia" dossier heavily relied on for information.

Perhaps the Russians preferred Mrs. Clinton over Mr. Trump, as the former came equipped with a pay-for-play charity that was utilized during the Kremlin's purchase of Uranium One - giving Russia control over approximately 20% of United States uranium. Bill Clinton, notably, also met with Vladimir Putin at his house the same day he gave a Moscow speech for a cool $500k to an investment bank which then upgraded Uranium One stock.

A close associate of Bill Clinton who was directly involved in the Moscow trip and spoke on condition of anonymity, described to The Hill the circumstances surrounding how Bill Clinton landed a $500,000 speaking gig in Russia and then came up with the list of Russians he wanted to meet.

The documents don’t indicate what decision the State Department finally made. But current and former aides to both Clintons told The Hill on Thursday the request to meet the various Russians came from other people, and the ex-president’s aides and State decided in the end not to hold any of the meetings with the Russians on the list.

Bill Clinton instead got together with Vladimir Putin at the Russian leader’s private homestead.

The friend said Hillary Clinton had just returned in late March 2010 from an official trip to Moscow where she met with both Putin and Medvedev. The president’s speaker’s bureau had just received an offer from Renaissance Capital to pay the former president $500,000 for a single speech in Russia. -The Hill

In comparison to the egregious pay-for-play facility the Clintons offered Russia, the FBI allegedly relied on the unverified 34-page "Trump-Russia" dossier to obtain a FISA surveillance warrant against one-time Trump campaign advisor, Carter Page. Prior to the FISA warrant, GOP Congressional investigators also believe the dossier was used to launch the original investigation into collusion between Russia and the Trump campaign before Robert Mueller was appointed as special counsel.

Rep. Gowdy, however, declined to confirm whether the dossier was used to obtain the FISA warrant - noting that it was classified at this point and he's not allowed to discuss it.

Gowdy also said in the interview that he suggested the memo be reviewed by the FBI and the DOJ prior to its release, however he says that the document contains information already provided by these agencies, noting "There's nothing in this memo the Department is not already aware of."